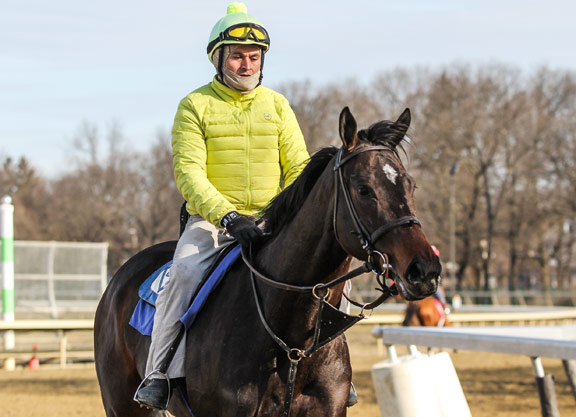 Dual Grade I winner and 'TDN Rising Star' GUARANA (Ghostzapper) makes her seasonal bow Thursday beneath the Twin Spires. Demolishing the field in her debut by 14 3/4 lengths in the slop at Keeneland last April, the bay followed suit with another dominant win in Belmont's GI Acorn S. in June. Capturing the GI CCA Oaks at Saratoga next out July 21, she was second when last seen in the GI Cotillion S. at Parx Sept. 21 and was subsequently shelved for the season. Out of a daughter of GI Breeders' Cup Distaff victress Pleasant Home (Seeking the Gold), Guarana is a half-sister to fellow 'Rising Star' Magic Dance (More Then Ready), who is a stakes winner and graded-placed and has been entered for Saturday's GIII Dogwood S. at Churchill. TJCIS PPs

MYSTIC GUIDE (Ghostzapper) looks to follow up on his 'TDN Rising Star'-worthy graduation last time in his first try against winners Thursday at Big Sandy. Third in his unveiling sprinting at Fair Grounds Feb. 21, the Godolphin homebred rolled clear by five lengths next out going two turns in NOLA last time Mar. 21. He is a son of MGISW millionaire Music Note (A.P. Indy), who is a half-sister to MGISW Musical Chimes (In Excess {Ire}). Peter Brant homebred Basquiat (American Pharoah) opened his account with a victory going seven panels at Gulfstream Apr. 25 and attempts a route of ground for the first time here. He hails from the family of Group 1 winners Taipan (Ire) (Last Tycoon {Ire}), All-Royal (Ire) (Royal Academy) and Sleepytime (Ire) (Royal Academy). TJCIS PPs

LA KARA MIA (Medaglia d'Oro), the first foal out of the late champion La Verdad (Yes It's True), makes her career bow against fellow native New Yorkers on the Belmont turf Thursday. The Lady Sheila Stable homebred is conditioned by Linda Rice, who campaigned her dam to an Eclipse award, 11 stakes wins and over $1.5 million in earnings. Rice also trained La Verdad's half-sister Hot City Girl (City Zip), a Grade III winner and Grade I-placed. La Verdad was euthanized May 10 due to complications from colic. Just days before her passing she produced a healthy Into Mischief colt. La Verdad's 2-year-old filly by Tapit, now named La Victoria, was purchased by Mandy Pope and Three Chimneys Farm for $800,000 as a weanling at KEENOV; and her yearling filly by Curlin RNA'd for $600,000 at that auction last year. TJCIS PPs