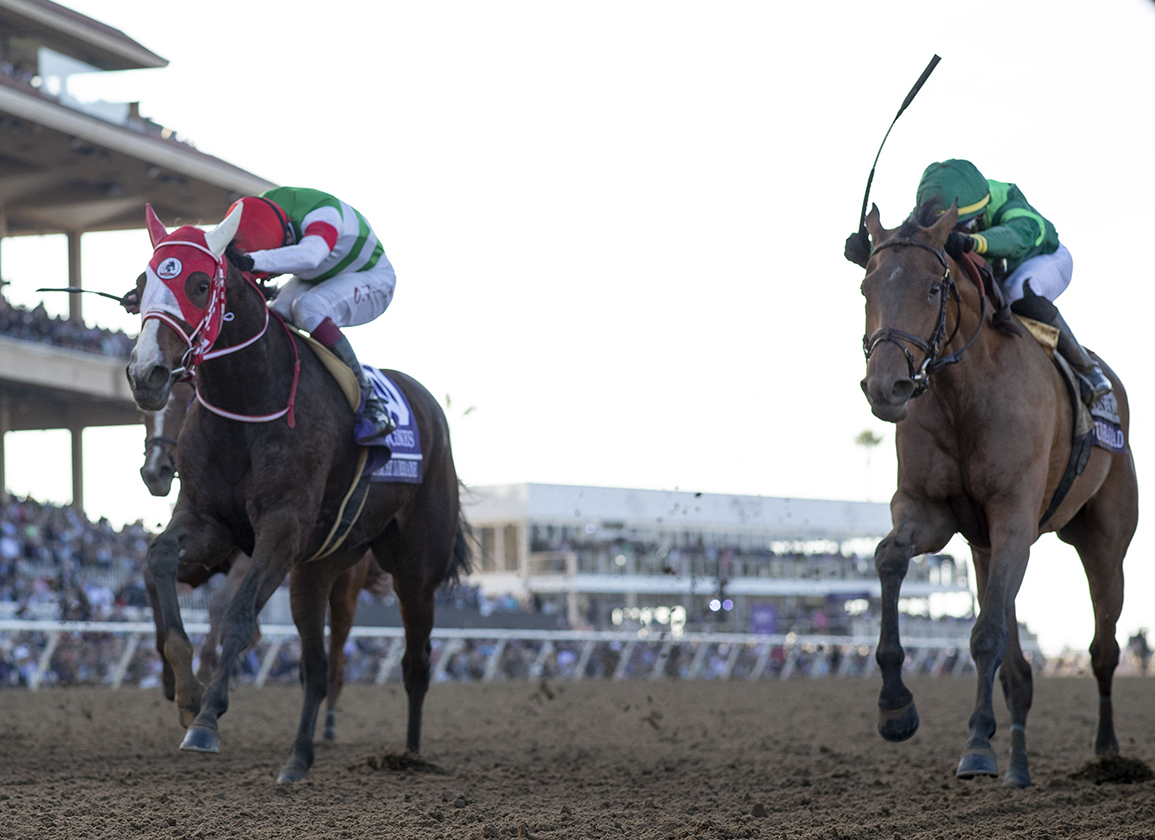 Marche Lorraine won three of eight last term, all at the listed level, and kicked off her 2021 campaign with a pair of scores–in the TCK Jo-o Hai at Ooi in January and the Empress Hai at Kawasaki in March. She was third in Chukyo's G3 Heian S. against males over muddy ground in May, and eighth at 54-1 in the 10-panel Teio Sho June 30, again over a wet track and in open company back at Ooi. The bay entered this off a snug 1 1/4-mile victory in the Breeders' Gold Cup at Mombetsu Aug. 21, but looked a decided outsider on paper, and would've likely been tough for many take at less than 100-1, even with Sunday's TDN already in hand.

Marche Lorraine broke towards the back and was third last into the first turn as Letruska was beaten to the front by rail-drawn GII Zenyatta S. winner Private Mission (Into Mischief). They were clearly moving right along, and the splits were posted as :21.84, :44.97 and 1:09.70, with the crowd letting out audible gasps each time Larry Collmus announced another fraction. Letruska briefly took over entering the home turn, but last year's GI Kentucky Derby heroine Sherdaresthedevil (Daredevil) immediately pounced on her three deep and the closers were winding up to have their say. Marche Lorraine knifed through horses rapidly while joined by Royal Flag (Candy Ride {Arg}) approaching the stretch, and had a slight edge as they straightened. Four foes had legitimate chances to run Marche Lorraine down in the final furlong, but she kept plugging away bravely to just find the line from a lunging Dunbar Rode down inside.

“I didn't know a whole lot about Marche Lorraine,” admitted British champion jockey Oisin Murphy. “Her trainer, Mr. [Yoshito] Yahagi, I ride a lot for in Japan and a fair bit for overseas. I've ridden for him in Dubai and Hong Kong. And he doesn't normally travel unless they have a chance… I tried to ignore her odds and just give her every chance in the run and hopefully she could finish off. And to be honest, we were obviously a hostage to fortune, I sat out the back, and they went quite quick. So we needed them to do that, but it was a brilliant performance.”

The winning conditioner's translator offered: “Traveling with [one filly] from Japan wasn't the ideal plan, and so Marche Lorraine was a good partner for Loves Only You. And Marche Lorraine had three victories over turf in Japan [further back in her form] and Mr. Yahagi was thinking that for horses to be competitive in the dirt in the U.S., need to have some sort of speed, which means like winning turf races in Japan.”

Owner U. Carrot Farm is a syndicate which has campaigned the likes of Group 1 winners Lei Papale (Jpn) (Deep Impact {Jpn}) and Lys Gracieux (Jpn) (Heart's Cry {Jpn}). Marche Lorraine has some 400 shareholders and the club syndicates approximately 50-70 horses per year.

It was a frustrating week for top trainer Chad Brown, who had to scratch two of his best Breeders' Cup hopes in Jack Christopher (Munnings) and Domestic Spending (GB) (Kingman {GB}) before taking tough beats in both of the races won by the Japanese fillies.

“I need to watch the replay,” he said of Dunbar's Road's runner-up performance. “It's a tough beat. I thought we got the head bob, there. It's probably the toughest loss I've ever had. It's just a shame because it's two years in a row where she really should have won the Distaff. She got a bad trip last time too [when third]. No one can convince me otherwise. She had some trouble down the backside and she ended up on the inside where I really didn't want her. The track is better outside. It just happened that way. Jose [Ortiz] did the best he could and she gave a valiant effort. I'm really proud of her. It's a shame her career ended this way. I thought she was a deserving winner of this race.”

As for Letruska, who already seemed to have champion older mare honors in the bag before the Distaff, trainer Fausto Gutierrez said, “I think maybe she found the pace too fast. When it's :21 and :44, it's very difficult. When its :21 and :44, it's impossible to run with these fractions.”

Pilot Irad Ortiz, Jr. concurred: “They went too fast. They didn't want her to be on the lead. They went after her. She wants to run and I tried to slow her down as much as possible, but it didn't work out.”

Marche Lorraine is one of three highest-level winners, 12 graded/group winners and 15 stakes winners for her sire, but the first outside of Japan. Orfevre (Jpn) (Stay Gold {Jpn}) traveled with his talent as well, taking back-to-back runnings of the G2 Prix Foy in France in 2012 and 2013, only to settle for second in the G1 Prix de 'Arc de Triomphe both terms.

Broodmare sire French Deputy is now responsible for the dams of 15 Grade I/Group 1 winners from Asia, to Europe, to the U.S. and South America.

The dam of seven winners from as many to race, dam Vite Marcher is a daughter of MSW Kyoei March, making her a half to SW/MGSP Triumph March (Jpn) (Jpn) (Special Week {Jpn}). Vite Marcher produced a colt by Real Impact (Jpn) this term.