“It's Amazing How Things Work Out Sometimes” 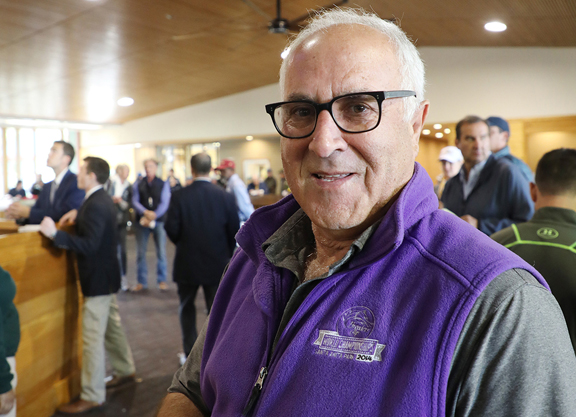 What a name, for a mare salvaging her sire from extinction: Unicorn Girl. Certainly the faint footprint of A. P. Five Hundred on the North American breed would otherwise, by now, have been thoroughly effaced. His eligibility to compete with other sons of A.P. Indy at stud was marginal in the first place, third place in the GII Super Derby being as good as it got in a light career. And, really, he never got off the grid. After a single spring trying his luck in Florida, in 2004, he was exported to Chile.

Of the few foals he left behind, Unicorn Girl won more than the rest put together. But even she was operating at such a level that a record as prolific as 54-19-7-8 could not take her earnings past $483,508. Many of her wins came in claiming company, resulting in repeated changes of barn. In 2013, aged eight, she won for a $16,000 tag at Monmouth Park and her racetrack odyssey came to an end.

She was claimed that day by a previous owner, J. & J. Stable, comprising Carlo Vaccarezza and a partner. Vaccarezza was by then becoming a well-known figure in the business, his homebred giant-slayer Little Mike having rounded off a spectacular campaign in the GI Breeders' Cup Turf the previous fall; he also co-owns Frank & Dino's, a favorite Italian restaurant for patrons of Gulfstream Park. The following year, moreover, Vaccarezza would start training in his own right.

“When we regained her, we sent her back to South Florida,” he says. “She was training well, but then I said: 'Listen, let's not ask her just to keep going and going. We know she tries, she's game and sound, let's breed her.'”

Her first couple of foals Vaccarezza retained for his own stable: a Bodemeister filly who finished second a couple of times and a colt named King Theo, now three, by More Than Ready. “He won a maiden at Gulfstream Park last year,” Vaccarezza says. “He was just beaten a head in an allowance at Ellis Park a few days ago, and I think he'll definitely be getting some black-type in the near future.”

Unicorn Girl's next foal was a colt by Maclean's Music, who was sold to Kirk Robison through Taylor Made for $95,000 deep into the Keeneland September Sale last year. Vaccarezza had actually put Unicorn Girl herself in the same ring, the previous November, with the bonus of a Candy Ride (Arg) cover, but took her home as a $110,000 RNA.

“I don't think we had much action, it's not the most fashionable pedigree in the world,” says Vaccarezza. “Maybe God was sending me a message. Sometimes he sends them in a funny way!”

He didn't necessarily take the hint straight away. Unicorn Girl was again catalogued for the Keeneland November Sale last year, but this time Vaccarezza decided to scratch her altogether. After all, he had not only decided to persevere with the mare but to upgrade her covering fees. In March, she delivered a colt by American Pharoah; and she is now in foal to Into Mischief.

“Steve is a good friend and I'm so glad he has him, he's doing a phenomenal job,” Vaccarezza says. “I was stabled really close to his barn in Keeneland, so every so often I would ask him about the progress of the horse. Steve always thought he was nice, said that he kept improving. Then he won first time out at Churchill, and Steve took him to Saratoga. And now he must be the top 2-year-old in the country so far.”

That's because Unicorn Girl's son is none other than Jackie's Warrior, explosive winner of the GII Saratoga Special S. Aug. 7. Dominating throughout, he smouldered through fractions of 22.08 and 44.85 before winning by three lengths, geared down, in 1:09.62, with 'TDN Rising Stars' Therideofalifetime (Candy Ride {Arg}), Momos (Distorted Humor) and Cazadero (Street Sense) giving vain chase. Having so far blitzed his rivals at five and six furlongs, Jackie's Warrior will next try a seventh to the GI Hopeful S.

Her other foals Kentuckian (Tiznow), Electric Forest (Curlin) and Saturday's GI Runhappy Travers S. disappointment Uncle Chuck (Uncle Mo) are graded stakes winners over seven, 8 1/2 and nine furlongs respectively. Asmussen says that he always felt Maclean's Music would be able to stretch his speed, and ultimately this is the Ogden Mills Phipps-Wheatley Stable dynasty of Lady Be Good, which has many Classic branches in Europe. Sure enough, Maclean's Music famously produced a Classic winner from his first crop in GI Preakness S. hero Cloud Computing.

That said, the hallmark of his immediate family is brilliance: it is full of fast horses that landed running, just like Jackie's Warrior. So perhaps we'll have to see what Unicorn Girl, herself a sprinter, can add to the equation.

With her sire's influence virtually unreadable, much the most conspicuous feature of her pedigree is the fact that both sire and dam are by sons of Seattle Slew: A.P. Indy and Doneraile Court. Unicorn Girl's dam Horah For Bailey was Doneraile Court's first stakes winner, but neither she–in a career confined to six juvenile starts at Calder–nor her sire made a great deal of progress thereafter.

Doneraile Court was at least credited as an influence for hardiness, and seems to have made rather more of an impression in Chile than A. P. Five Hundred; while Horah For Bailey represents a doughty European turf line. Overall, however, there is little quality adjacent in the family tree and, on the face of it, the emergence of Jackie's Warrior appears to reflect creditably on a sire consolidating his place in a market he entered with 79 mares covered at just $6,500.

Even before Cloud Computing (and indeed subsequent GI Champagne S. winner Complexity) had really put his name in lights, the debut crop of Maclean's Music made such an impression in 2016–his 20 juvenile winners, a class high, came from just 40 starters–that Maclean's Music received 181 mares at $25,000 the following spring. Early graduates of that book include not only Jackie's Warrior, but also Sonic Brees, on the podium in the GII Best Pal S. over at Del Mar Aug. 8.

As it happens, the sales division of his host farm Hill 'n' Dale is preparing Unicorn Girl's daughter by Candy Ride for Fasig-Tipton's Kentucky Yearling Sale in October. “She's an outstanding filly,” Vaccarezza says. “Really a beautiful individual. With the pandemic, of course, nobody knows what will happen at the sales. If she doesn't make what she deserves in October, we will just send back to Ocala to Jim Gladwell, and sell as a 2-year-old at Gulfstream Park instead.

“But I think regardless of the pandemic the big buyers know where the good horses are: they'll have their people doing the legwork as always, even if they can't be there in person, and I think the top end is still going to be strong. And the scavengers in the last book are still going to be there. It's the middle of the market that may hurt, but I hope a good horse will still sell.”

Vaccarezza will be shopping himself, of course, both as a pinhooker and as a trainer. It was his confidence in his judgment of horseflesh, after all, that emboldened him to embrace new challenges so deep in a Turf vocation that began as a hotwalker at Aqueduct way back in the 1960s, after his arrival from his native Genoa.

“God gave me a gift,” he says. “I have a pretty good eye. Sometimes I look at horses a little different. I try to put a picture in my head: how will this horse look as a 2-year-old? If I am going to sell a horse, I look for a horse that is going to be fast, because this is 'the flavor of the week.' When I make my short list, I am looking for the athlete. Only then will I look at the pedigree, and see if the sire is commercial. Even if a horse breezes in :9.4, they won't make the big dollars if they don't have the right sire. So those I will look to race myself.

“I started training 5 1/2 years ago and have had nearly 130 winners so far. It's challenging, but I like to see a young horse develop. I'm not the most proactive with the 2-year-olds. I've had some run well the last couple of weeks, but when they have run once or twice, I like to send them to the farm for 35 or 40 days, let them grow up, let them become a horse.”

While so much of the industry has been stranded by the pandemic, these are especially exciting times for Vaccarezza. In March, after almost 30 years in Florida, he moved his 28-horse stable to Keeneland; and he will soon be opening a new Frank & Dino's in downtown Lexington.

“I feel that Kentucky is the future of racing,” he says. “There are issues everywhere else: California, Florida, New York. And I think the way the purses are going to be structured, and with the reshuffle and reorganisation of racing at Keeneland and Churchill Downs, the Mecca of racing is going to shift here.”

And, if the Bluegrass is the heart of the professional community nationwide, then there's nothing like a restaurant to put you at its own center. Frank & Dino's in Florida has frequently been the focus of fund-raising: recently to help backstretch workers through the coronavirus crisis; in times past, to aid flood victims in Houston, disabled jockeys and, most poignantly perhaps, victims of a mass shooting at the Marjory Stoneman Douglas High School in Parkland, Florida. Vaccarezza's two sons (one of whom, Nick, now works for Chad Brown) were in school that terrible day.

“They escaped by jumping a wall into an adjacent field,” Vaccarezza says. “Unfortunately Nick's friend Joaquin Oliver did not make it. We raised $182,000 but no money in the world can pay for 17 innocent lives. As a human being, you have to do what you can. Some jockeys almost become homeless when they finish. Some will need a wheelchair. In a business that we love so much, that gives us so much pleasure, we should all give back to our community.

No host could better convey the romance of the sport. He remembers stopping the van taking a mare named Hay Jude (Wavering Monarch) off to an uncertain future, repaying her purchaser, and sending her foal by the unraced Spanish Steps into training. That was Little Mike, who banked $3.5 million.

“The funny part is this,” says Vaccarezza. “I was with Charlie LoPresti one time and we talking about the high prices for some of these horses. And my son, he was 13 or 14, he said: 'Dad, can you believe that for $8,000 you could have had Wise Dan and Little Mike?' And it was true. With the fees for Wiseman's Ferry and Spanish Steps, for that money you could have bred two champions. By the same token, you see people buy horses for millions and end up with nothing. It's amazing how things work out with horses sometimes. Like not selling Unicorn Girl that time. Now she's paying me back.”