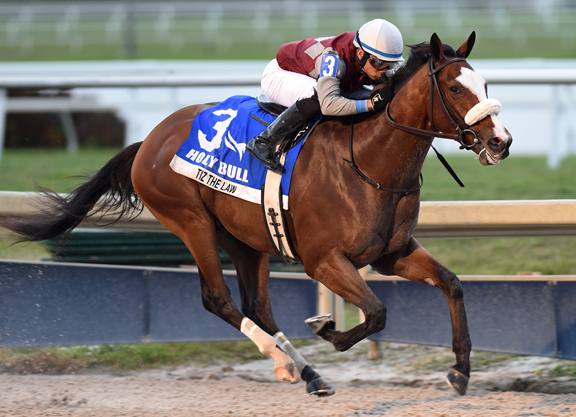 With racing already halted at several venues around the country, Gulfstream Park forges ahead with it's season anchoring marquee test for 3-year-olds, the GI Florida Derby. Highlighting the nine-furlong test is Grade I-winner Tiz the Law (Constitution), one of three runners by the young stallion in Saturday's race. The colt was last seen winning the Feb. 1 GIII Holy Bull S. at the Hallandale oval.

“It really hasn't changed anything,” said Sackatoga Operating Manager Jack Knowlton of the effect of the colt's training regime due to the Coronavirus pandemic. “We had targeted this for our next race after the Holy Bull early on. Everything that [trainer] Barclay [Tagg] has done to get him prepared for this race hasn't changed. This has been the race that we were hoping would get us enough points to put us in the [GI] Kentucky Derby. We're still hoping that, even though the Kentucky Derby has now been moved four months.”

“We felt he was a very special horse, not only when he won the Champagne, but also when he broke his maiden at Saratoga,” said Knowlton. “Unfortunately, we just hit a race that things just didn't go our way at Churchill. As the day went on, the track got sloppier, and he got stuck down inside and it really wasn't the best of trips for him. Basically, that was a race we just ran a line through it, even though he only got beat by three-quarters of a length. What it really prevented was that he might have gotten the Eclipse Award as a 2-year-old if he had won that race. Fortunately, he came out of that race in good order and Barclay did a great job getting him ready for the Holy Bull.”

“In [the Holy Bull], he really went beyond expectations,” said Knowlton. “We were confident and he was a horse that could win that race, but to win it as impressively as he did, was very rewarding for us. It validated the fact that he is one of the horses that should be in the starting gate the first Saturday, now, in September.”

In 2003, New York bred Funny Cide (Distorted Humor) gave the Sackatoga team the ride of a lifetime when he won the Kentucky Derby and the GI Preakness S. before finishing third behind Empire Maker in the GI Belmont S. He was named champion 3-year-old colt for the 2003 season.

“When Funny Cide retired in 2007, never did I expect that Sackatoga would have another horse that could even be thinking about another Derby,” admitted Knowlton. “We buy one or maybe two horses a year, and we don't spend a lot of money. We always buy New York breds, so we're not in the game to try and get a horse to go to the Kentucky Derby. What we're hoping for is a horse that can run in the New York-bred stakes. If we're successful in that, we see that as the top level of our expectations. The parallel really between Funny Cide and Tiz the Law is they both came from first crop sires that turned out to be tremendous sires. And we got the opportunity to buy them [$75,000 for Funny Cide; $110,000 for Tiz the Law] and you can't get horses from established sires for those kinds of prices. We've been extraordinarily fortunate two times with first crop sires.”

Pletcher Tries for Sixth Win
A five-time winner of the Florida Derby, trainer Todd Pletcher attempts to add win number six with Team Valor and WinStar Farm's Gouverneur Morris (Constitution) Saturday. The grey is a member of the first-crop of WinStar stallion Constitution, who was led to victory by Pletcher in the 2017 renewal of the race. Pletcher previously won the Kentucky Derby with Super Saver (Maria's Mon) in 2010 and Always Dreaming (Bodemeister) in 2017.

Victorious in his first start at Saratoga last September, the colt finished second behind Maxfield (Street Sense) in the Oct. 5 GI Breeders' Futurity S. at Keeneland. He marked his sophomore debut with a win in a Tampa allowance Feb. 14.

“One of the things we felt coming into the spring was we were making all of the plans assuming the Derby was going to be run the first Saturday in May,” explained Pletcher. “Based on his development, coming into the Kentucky Derby in his third start was going to be the best way to prepare him for his best effort. We decided to go to the Tampa allowance race which we have had success before. Always Dreaming and Super Saver both made starts there as 3-year-olds. We put ourselves in the position at that point that we will only have the opportunity to run in one race that he will get points, so it was something we talked about with Team Valor and WinStar and everyone felt comfortable with that plan. We felt if he got to the Florida Derby, the [GI] Bluegrass S. or the [GI] Wood [Memorial] and he finished in the top two, that would be enough to get in and if he didn't, he probably needed a little more time to get there. That was the plan, and as always, you have to be prepared to make some adjustments along the way.”

In preparation for the Florida Derby, Gouverneur Morris recorded a five furlong move in 1:01.65 (3/12) at Palm Beach Downs Mar. 21.

“We figured, based on his last breeze, he's ready to go,” said Pletcher. “The Florida Derby is right in front of us and in uncertain times like this, we felt we needed to go ahead and take what's in front of us now rather than wait for something else.”

When asked about the change in date to the Kentucky Derby, which has now been pushed back to early September, Pletcher added, “We're not looking beyond the next race on Saturday. The biggest concern is for all the participants, your employees, your family and the rest of the world. There are much bigger things going on right now other than horse racing. But this is what we do, and we will try to execute our game plan as best we can. But it's certainly not a time to be thinking about too much what you're going to be doing a month or two months from now. You just do the best you can.”

Return of Independence
Two for two in 2019, including an eye-popping 12 1/4-length route in Aqueduct's GIII Nashua S., Independence Hall (Constitution) looks to return to that form Saturday following his first career defeat last time out in the Feb. 8 GIII Sam F. Davis S. at Tampa.

“We were hoping for a little bit of a better results,” admitted trainer Mike Trombetta. “He had a few excuses that we can build on. It was his first two-turn race. It was also a very lively pace, and he chased that pace, and probably paid for it a little bit at the end. For what's it's worth, he lost a shoe in the race, which is something we can't control, but we would rather not have that happen. We looped him on down to Gulfstream, he did get a breeze over the track [4f, :48.31 7/67, Mar. 22] and he seems to be doing well.”

A debut winner going seven furlongs at Parx last September, the dark bay was given plenty of time until his runway Nashua win Nov. 3. He returned to take his 2020 debut in the one-mile Jerome S. on New Year's Day.

“The Nashua was just a super race for a horse and that early in his career,” said Trombetta. “He was really unlikely to come back and duplicate that kind of performance. He did come back well enough to win [the Jerome], but he didn't run quite as fast as he had in the Nashua. I'm hoping with this time and continued training, he can in fact find that form that he had in the Nashua.”

Obviously high on the lightly-raced colt, Trombetta remains confident that there is more to come from his star pupil this season.

“I just don't know how far he's going to take us,” he said. “He has so much upside to him. He's handled everything real well to this point. For any horse that has had four races at the level that he has and he's only had one defeat, I still believe there is a huge upside and I look forward to seeing it out.”