Insight Outcomes: Half to Gronkowski and More 'Set Sail' 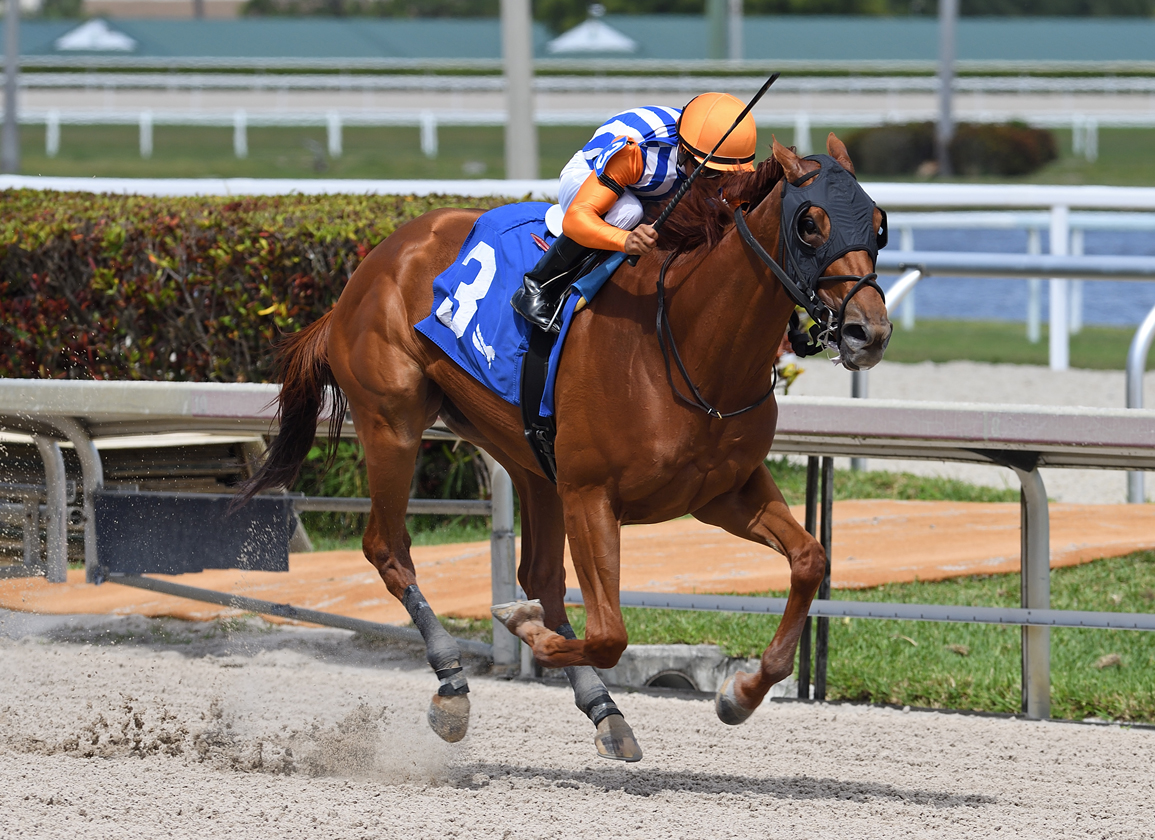 It was a stellar week of racing, but not a single 'Insighted' horse won! That's racing. All runners appeared to come back well with bright futures ahead. A number of other new winners stepped up, including the first of five Saturday Fair Grounds scorers for the dynamic duo of Steve Asmussen and Joel Rosario, as well as a sharp-looking LNJ Foxwoods homebred at Santa Anita.

It was MISSY GREER (f, 3, Nyquist–Four Sugars, by Lookin At Lucky), a half-sister to Gronkowski (Lonhro {Aus})–runner-up in both the 2018 GI Belmont S. and the 2019 G1 Dubai World Cup–who got off the duck in this Gulfstream maiden by a daylight margin. Seven of the eight fillies in the field had at least one start under their belt, with the lone exception being debuter I'm Baffled (Medaglia d'Oro), a $1.1-million yearling purchase for Mandy Pope's Whisper Hill at the 2020 Keeneland September sale. I'm Baffled stumbled out of the gate and rider Tyler Gaffalione had already made the decision to save her for another day before the final turn. Her half-brother, young sire sensation Constitution (Tapit), won both the GI Florida Derby and the GI Donn H. over this track, so don't count her out in her next start. Click for the Equibase.com chart or VIDEO, sponsored by TVG.

Favored firster BELLE REBELLE (f, 3, Upstart–Iboughtheranyway, by Dixie Union) got the win over $600,000 OBS graduate Catch Magic (Curlin), Juddmonte homebred Patna (Into Mischief), and Claiborne homebred Misread (Blame), all fellow debuters. She had worked a bullet four furlongs in :47 1/5 (1/110) Mar. 19 in preparation for the win for Hall of Famer Steve Asmussen, who teamed up with Joel Rosario Saturday at Fair Grounds for five wins together including Epicenter (Not This Time)'s GII Louisiana Derby and Echo Zulu (Gun Runner)'s GII Fair Grounds Oaks. Belle Rebelle led pillar to post, while Misread and Patna both closed to fill out the trifecta. Click for the Equibase.com chart or VIDEO, sponsored by TVG.

Whether it was third time the charm, the stretch out to a mile from 5 1/2-furlong sprints, or blinkers off for FANCY MARTINI (f, 3, Klimt–Miss Canada, by Distorted Humor), she was the dueling half-length winner at 16-1. The 'Insighted' Forgotten Realm (Curlin) broke widest of all and dawdled at the back of the field, but made up ground late while about eight paths wide. The $625,000 Keeneland September buy's dam is a full-sister to the dam of MGISW Shedaresthedevil (Daredevil), a Brad Cox stablemate and a $5-million purchase at Fasig-Tipton November for Flurry Racing Stables, Qatar Racing, and Whisper Hill Farm. Shedaresthedevil partner Qatar Racing also owns Forgotten Realm. Click for the Equibase.com chart or VIDEO, sponsored by TVG.

This is the sort of maiden special weight that holds a similar type of appeal as a Saturday afternoon black-type event. LNJ Foxwoods homebred SET SAIL (c, 3, Malibu Moon–Fleet of Gold {SP, $109,892}, by Medaglia d'Oro) likely needed the race when he debuted with a third Feb. 26 at a sixteenth shorter and an 81 Beyer for Hall of Famer Richard Mandella, who isn't known for cranking up his first-time starters. The bay went straight to the front in company Sunday, was tested first by Bletchley Park (Nyquist) and then another rival, but put all comers away to draw off by 7 1/2 lengths in a minimalistic ride by Juan Hernandez. Set Sail shares a champion granddam–Fleet Indian (Indian Charlie)–with champion and young sire Game Winner (Candy Ride {Arg}). Mandella's other race entrant, Q B One (Uncle Mo), improved to third from his Dec. 26 unveiling. Q B One, the first foal out of multiple champion Beholder (Henny Hughes), had been gelded in the interim. The race favorite, the aforementioned Bletchley Park, was the $2.6-million topper at last year's Fasig-Tipton's Gulfstream sale after working :9 4/5. Click for the Equibase.com chart or VIDEO, sponsored by TVG.