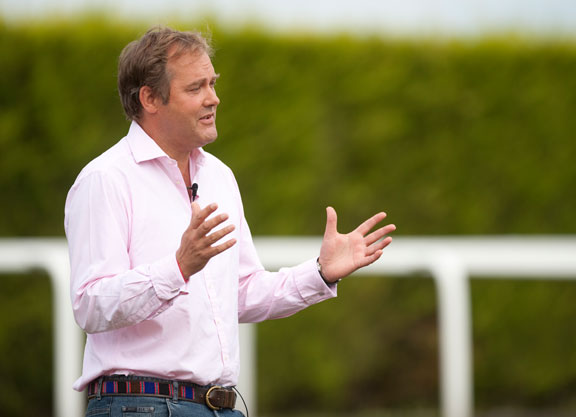 Thunderous (Ire) (Night of Thunder {Ire}) and Fantail (GB) (Zoffany {Ire}) are two potential Classic prospects to look forward to this year in the Highclere Thoroughbred Racing silks. A Mark Johnston-trained Night of Thunder colt, Thunderous ended his juvenile season unbeaten in three starts, picking up listed honours in the Denford S. at Newbury in August. Also hopefully in the big-race picture for Highclere is the once-raced filly Fantail, trained by Simon Crisford.

Highclere Managing Director Harry Herbert said, “I think we've got some nice horses. Thunderous had a little injury after Newbury–nothing serious, thank goodness–otherwise we'd have loved to have run again and gone to the Royal Lodge or Dewhurst or Vertem Futurity or something.

“Sadly we couldn't do that and now we'll just have to wait and see what happens, see when racing resumes and in what form. He is a very exciting horse. We've got a lovely filly with Simon, she won her only start impressively and I think he holds her in high regard. She has a proper physique on her and could be something, hopefully.

“We also have a lovely horse with Roger Varian called Ascension (GB) (Dark Angel {Ire}), who won two of his four and is one of those who could only look better this year physically.

“We've also got some nice unraced horses and a nice team of 2-year-olds and we've got a lovely older horse too called Durston (GB) (Sea The Moon {Ger}) with David Simcock, who could be very good. He just got beat at Glorious Goodwood by Sir Ron Priestley (GB) (Australia {GB}) [who went on to be second in the G1 St Leger]. He's got very good form and he's done well physically, so we're excited by him.

“Like everyone who owns a racehorse now, it's very frustrating, but the main thing of course is that everyone stays safe and then hopefully we'll all get going again.”

Expanding on plans for Thunderous, Herbert said, “We were thinking possibly of running at Newcastle in the conditions race there on Good Friday, that looked a possibility for him as a valuable race with the conditions set up well for him. Either that or go from there to another trial or straight to a Guineas. He's quite a difficult one pedigree wise, we don't know how far he stays. In his races it's looked like he's going to be swallowed up and then he's kicked on and effortlessly found another gear.

“We just don't know, he's bred to be a miler, but with his style of running he may go further. He's very strong–a typical Night Of Thunder. He's a fantastic looking horse and could be very good.”

Showing the regard in which Fantail is held, Herbert revealed the daughter of Zoffany could have made her debut at Royal Ascot.

He said, “That day at Chelmsford she was pretty free early on, and then won going away from the front, which I think is a very good sign. I'd be surprised if she's not pretty decent.

“Interestingly, Simon was considering running her first time up in the Chesham. She just got a minor setback, which probably was a blessing in disguise, but for someone as shrewd as Simon to say he was thinking of running a filly first time up in the Chesham, she must have shown him something at home. She might be a bit special. The plan had we been racing would be to start in a Guineas trial, either here or in France, and go from there.”