Grade I Winners Prep For Foster 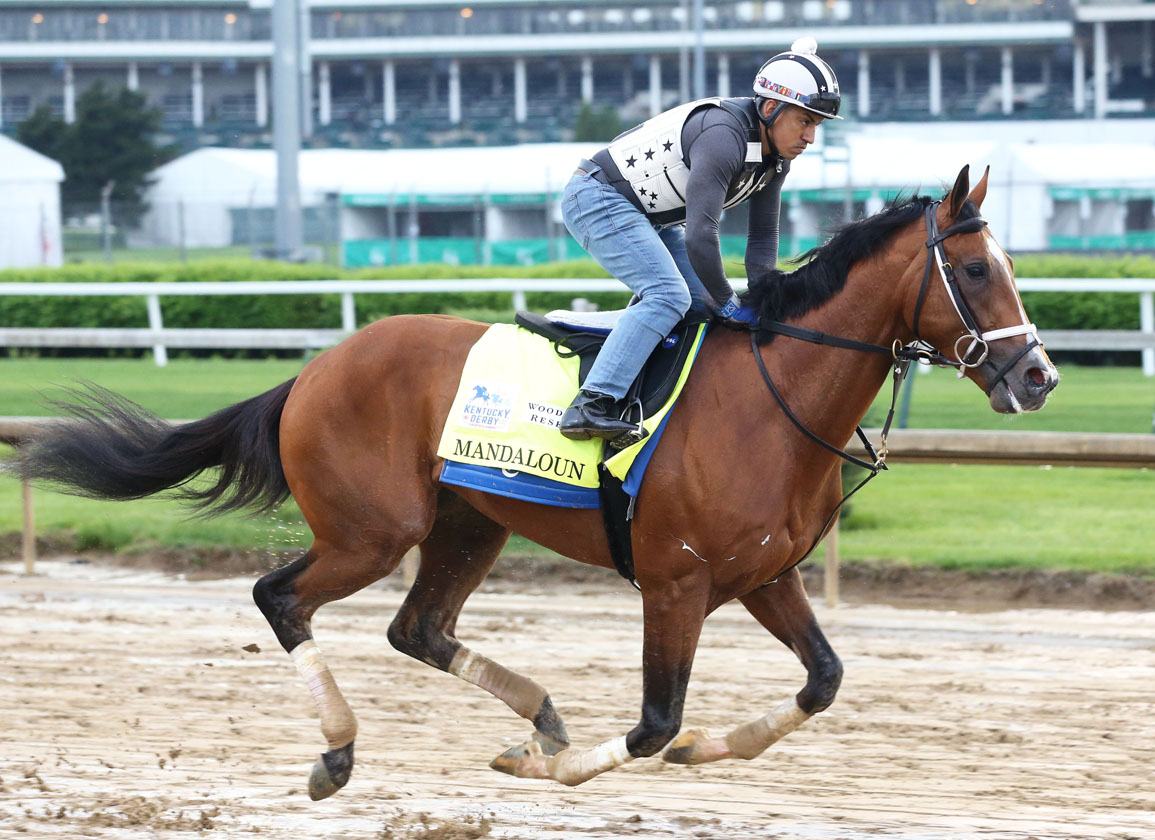 A week ahead of their expected clash in the $750,000 GII Stephen Foster H. at Churchill Downs, 'TDN Rising Star' Mandaloun (Into Mischief) and fellow Grade I winner Americanrevolution (Constitution) each breezed five furlongs beneath the Twin Spires Saturday morning.

The adjudicated winner of the 2021 GI Kentucky Derby, Mandaloun hit the track at 5:30 a.m. and covered the five furlongs while working on his own in 1:00.80 under the watchful eye of trainer Brad Cox. His previous moves had come in the company of his GIII Oaklawn Mile-winning stablemate Fulsome (Into Mischief). Mandaloun was an impressive winner of the GIII Louisiana S. in his first start of the season and was last seen finishing a well-beaten ninth in the G1 Saudi Cup Feb. 26.

“We thought about running in the [GIII] Salvator Mile [at Monmouth Park June 18], but it didn't make sense to ship him across the country with the hot weather when we can run out of our own stall at Churchill,” Cox said. “Once we got him back to the barn after the Saudi Cup, he's really been doing well at Churchill and we've been very pleased with his progress from that race to run him in a race like the Stephen Foster.”

Americanrevolution breezed in the company of last-out Blame S. winner Dynamic One (Union Rags) and went the distance in 1:00.20 before galloping out six panels in 1:13. The CHC Inc. and WinStar Farm runner won last year's GI Cigar Mile H. and was to have returned in the state-bred restricted Commentator S. at Belmont late last month, but was re-routed for the Blame when the race did not go. Americanrevolution was only fourth as the 11-10 favorite in the Blame, but trainer Todd Pletcher is taking a glass-half-full approach.

“It was maybe a better race than it looks on paper,” Pletcher said. “He was pretty wide on both turns–figure-wise, it came back solid. I think he took all the worst of it there off the layoff and when his schedule was adjusted late. He should be ready to move forward.”

Title Ready (More Than Ready), third to the Foster-bound Olympiad (Speightstown) in the May 6 GII Alysheba S. at Churchill, went a half-mile in :49.40 for trainer Dallas Stewart.

The Foster is a 'Win and You're In' qualifier for the GI Breeders' Cup Classic.

Gold Square LLC's Cyberknife (Gun Runner), who most recently nosed out Howling Time (Not This Time) in the GIII Matt Winn S. June 12, returned to the worktab Saturday morning with a half-mile breeze that was timed in :48.80 (42/125). The GI Arkansas Derby hero is likely to make his next appearance in the GI TVG.com Haskell Invitational S. at Monmouth Park July 23.

“He's a Grade I winner already and I think a race like the Haskell could help him increase his stallion value,” said Cox, who won last year's Haskell with the promoted Mandaloun. “He gutted out a victory in the Matt Winn last time and showed a lot of determination to get to the wire from off the pace. It'll be a tough race in the Haskell, but we're confident with him going up against Grade I-caliber horses.”

Cyberknife's owner Al Gold is a native of New Jersey.