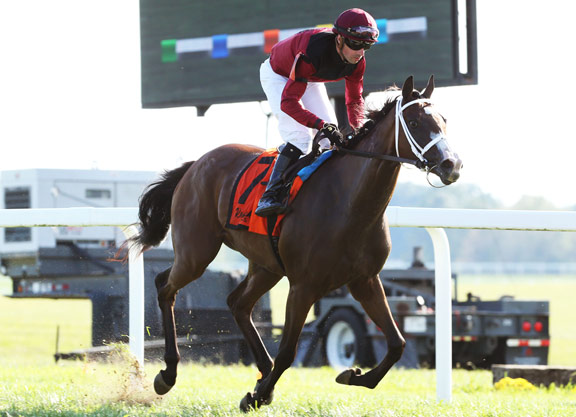 A competitive group of 14 juvenile fillies are set to compete for a spot in next month’s GI Breeders’ Cup Juvenile Fillies at Keeneland Wednesday in the GII J.P. Morgan Chase Jessamine S. The likely favorite is undefeated Jezebel’s Kitten (Kitten’s Joy). A debut winner at Ellis Aug. 10, the Brad Cox pupil followed suit with a decisive score in the Juvenile Fillies S. at Kentucky Downs Aug. 31.
Todd Pletcher saddles a live contender in Sweet Melania (American Pharoah). Third in her first two attempts sprinting on dirt, the $600,000 KEESEP buy blossomed when switched to the turf and stretched to a route of ground, earning her diploma in a Saratoga test July 14. She came up just a neck short next out in that venue’s P.G. Johnson S. Aug. 29.
Chad Brown and Peter Brant can never be ignored in a turf race and they team up here with Indochine (War Front). Third in her turf sprint unveiling at the Spa Aug. 9, the dark bay broke through next out going a mile over the Belmont lawn Sept. 14.
Mark Casse also sends out an interesting competitor in Diamond Sparkles (War Front). Breaking her maiden at second asking in England July 26, she was privately purchased by Eclipse Thoroughbreds and Gary Barber and transferred to Casse. The bay rallied to be fourth in her lone start for that barn in Woodbine’s GI Natalma S. Sept. 15.