From Arizona To Ascot 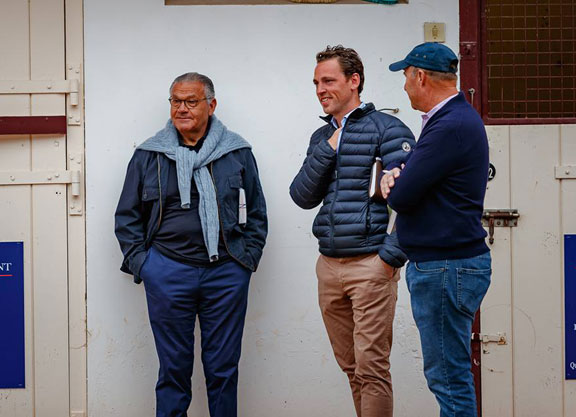 Charles Briere's Fairway Consignment seems to have sailed a smooth upward trajectory since its establishment four years ago, hitting one target after the next. This June, a significant milestone was achieved when Fairway pinhook graduate Arizona (Ire) (No Nay Never) took Royal Ascot's G2 Coventry S. Fairway Partners purchased the dark bay for 65,000gns at the Tattersalls December Foal Sale and sold him to MV Magnier for €260,000 at last year's Arqana August sale.

“The main reason we bought him is because he was a son of No Nay Never,” Briere explained. “And Dabirsim was in the pedigree, and at the time he was doing very well with his 2-year-olds in France so we thought he'd be the ideal horse to sell back in France at the August Sale.”

Briere admitted that the Fairway Partners rolled the dice with Arizona putting him through the August sale as he was not a precocious yearling, but their gamble paid off with the shrewd Coolmore team recognizing his potential.

“He did well back at the farm, but the August sale did come a bit fast for him,” Briere said. “But there were only three No Nay Nevers in the sale so we thought we'd take a chance, and it worked. But he was always a very straightforward horse, very easy to look after and with a great temperament.”

Briere was not at Ascot to celebrate Arizona's victory-he stayed back in Normandy to keep an eye on the 17 yearlings he sells in Deauville this weekend and at the v2 sale-but the 32-year-old said the fact that he had spent some of his formative years with the Coolmore team made the victory extra sweet.

“You really enjoy it, especially with a horse you've pinhooked,” he said. “I worked for Coolmore for a couple years so it was even nicer to have that kind of horse win a big race for them.”

Briere, who also spent time working for the likes of The Castlebridge Consignment before stints in Kentucky with Indian Creek Farm and Woods Edge Farm, sent out his first consignment at Arqana's August sale in 2015 with a pair of colts he had bought as pinhooks with California-based Frenchman Hubert Guy. One doubled its purchase price, while the other made a shade more than his original price, and Briere was on his way. His August draft grew to eight the following year, then 14, then 16, and this year he has 17 between the main sale and the v2 sale. Briere noted that, more importantly, his consignment's quality is increasing year-on-year; he has more than ever selling this year during the boutique Saturday and Sunday sessions.

“I don't want it to get too big, I want to keep it boutique, but the quality is increasing year after year, and especially now with all the good results we've had on the track this year, it helps us get better horses for the sales,” Briere said.

Indeed, it hasn't only been Arizona flying the Fairway flag. Other graduates include Olendon (Fr) (Le Havre {Ire}), who won the Listed Prix Finlande in April and was second to Siyarafina (Fr) (Pivotal {GB}) in the G1 Prix Saint-Alary before joining trainer Chad Brown in the U.S. Boitron (Fr), another by Le Havre, won last year's Listed Denford S. and was fourth in the G1 Prix Jean-Luc Lagardere, while 2-year-old Helter Skelter (Fr) (Wootton Bassett {GB}) looks a smart prospect, having won on debut by 3 1/2 lengths at ParisLongchamp on June 13 before finishing a neck second in listed company a month later.

In this year's Fairway August consignment, buyers will have their chance to get their hands on another No Nay Never pinhook, lot 102, a colt bought for 120,000gns at Tattersalls last December out of the Montjeu (Ire) mare Je T'Adore (Ire). He is one of five by the sire this year in the catalogue.

He is followed through the ring by Fairway's Showcasing (GB) colt (lot 103), who is the only one by his sire in the sale. He was also a six-figure Tattersalls purchase, having cost 130,000gns, and the timing could hardly be better with Showcasing having an excellent year headed by G1 Commonwealth Cup and G1 Prix Maurice de Gheest winner Advertise (GB) and supported by exciting juveniles like G3 Prix Six Perfections winner Tropbeau (GB) and 'TDN Rising Stars' Free Solo (Ire) and Windracer (Ire).

Lot 49 is a filly that should appeal to a transatlantic audience. By leading French sire Siyouni (Fr), she is out of the American stakes winner Apple Charlotte (Smart Strike), already the dam of Lottie (Arch) who is twice graded placed on the turf. Grade I-winning sprinter Marley's Freedom (Blame) appears under the third dam. The consignment also includes a pair by Camelot (GB), a daughter of Fastnet Rock (Aus), a colt by Holy Roman Emperor (Ire), two sons of Intello (Ger) and a colt by highly anticipated first-season sire Shalaa, among others.

Briere made another significant upgrade to his business last year with the purchase of a farm. After operating out of rented facilities during his early years, his yearlings are now prepped on his 20-hectare parcel of land about 30 minutes outside Deauville, in the vicinity of the likes of Monceaux and the Aga Khan's Haras de Bonneville.

“It used to be a cattle farm,” Briere said. “We transformed it last year and we're there full-time now. The location is very handy. At the moment we have 23 stables with all the facilities for prepping; a lunging ring, a walker and small paddocks.”

Briere will tick another box in October when, for the first time, he will offer a consignment outside France with three yearlings at Book 2 of Tattersalls October: fillies by No Nay Never and Elusive Quality, and a colt by Camelot.

“It's a small draft but it's better to start small over there to find our mark and see how it works out,” Briere said. “We're not doing Book 1; you need some really big horses to go there so we'll start small with Book 2.”

In just four years in business, Briere has already proven that starting small is no hindrance to making it big, and the name Fairway is one that we'll likely see continue to rise through the ranks.