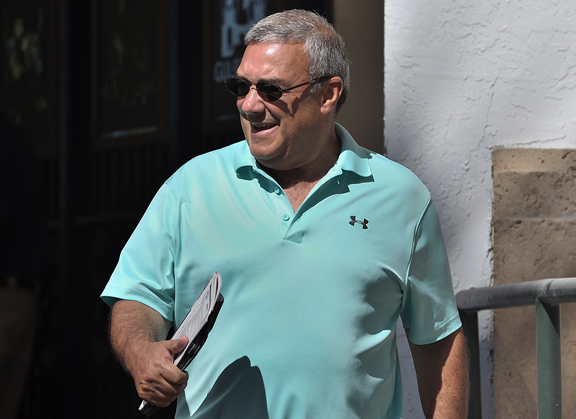 In Imprimis (Broken Vow), Joe Orseno has the morning-line favorite in Friday's Janus S. at Gulfstream, the first race that will be held at the South Florida track under new rules that prohibit the use of Lasix in stakes races. Orseno isn't looking forward to what will become the new normal for horsemen across the country at most major tracks.

“It's a big adjustment and I'm not fond of the new rules,” he said. “I don't see how you can take a horse who has been running on Lasix his whole life and all of a sudden penalize the best horses in the country for being good horses. They didn't think this through. I don't know how it won't be animal cruelty when you see a horse come back and there is blood coming out of both nostrils.”

Though no fan of the new rules, Orseno doesn't believe that Imprimis will have a problem and he did start the turf sprinter without Lasix in 2019 when venturing to Royal Ascot for the G1 King's Stand S. Imprimis was sixth that day in his only career start without the anti-bleeding medication. But Orseno is adamant that the new rules will cause more problems than they will solve.

Trainer Eddie Plesa Jr. will send out Miss Auramet (Uncaptured) in the day's Abundantia S. It will be her 17th career start and first without Lasix. Like Orseno, he is not a fan of the new regulations.

“I have been doing this for a long time and the one medication that I have seen that has been most important for the well being of the horses has been Lasix,” he said. “There has been a negative reaction to Lasix, but not from the horsemen or by horse people that use it. They say a concern is that it masks other drugs. I don't see it that way. I see it as a medication that people take every single day. It helps people without doing anything negative to them and it's the same thing with horses. People that aren't horse people have made these decisions and I think it was somewhat fueled by PETA and others. If you went ahead and polled all the horse trainers they would be overwhelmingly for the use of Lasix.”

Lasix will be less of a factor in the Cash Run S., a race for 3-year-old fillies. With Lasix having been banned in 2-year-old races at Gulfstream in 2019, most of the starters have been running medication free. That's nowhere near the case for the Janus S., which brings together a group of veteran turf sprinters, most of whom have never run without the medication. That includes the second choice on the morning line, Extravagant Kid (Kiss the Kid). Trained by Brendan Walsh, the 8-year-old veteran will be making his 47th career start. Walsh has no idea what to expect.

“You wonder what's going to happen with an older horse like this one who has run a bunch of times on Lasix,” he said. “How is he going to react to it? We'll just have to see what happens. He's not a bleeder but he's never run without it. We'll be able to form a better opinion after we've seen a bunch of these races. It's hard to make any judgments.”

While Walsh is willing to keep an open mind, he is among the many horsemen who believe the sport has far bigger problems than Lasix.

“I don't think this is the be all and end all of the problems here,” he said. “There are a lot more factors outside of this. Lasix is one of the sport's lesser problems.”

Trainer Jose Delgado will start The Critical Way (Tizway) in the Janus. He says his horse has been getting the minimum dosage of Lasix and should be fine without the medication. But he is among those who is not in favor of the ban. He doesn't want to see situations where horses are visibly bleeding from nostrils after running without Lasix.

“I really don't think it is fair for a lot of horses because they normally bleed,” he said. “I don't know why they are doing this. Maybe PETA has something to do with it. You're going to see horses come out of races bleeding from the nose and the public is going to see that. That's not going to look good. But what can we do? We have to follow the rules.”

Kent Sweezey has Blind Ambition (Tapit), a horse who comes from off the pace, in the Janus. Sweezey said the Lasix ban is more likely to hurt front runners because they exert themselves early on in their races.

“I think the pace will be a big thing,” he said. “I'd love to see it where horses settled rather than always having some horse going :22 and change on the front end. You may not see that anymore because if they do that they're going to bleed without the Lasix. It could be so bad that they won't be able to run for another six weeks or at least run competitively for another six weeks.”

That's something bettors may need time to figure out. And not only will they have to decipher races like the Janus and the Abundantia where every horse is coming off Lasix, there are nine horses on the Friday card at Gulfstream that are racing with Lasix for the first time. There will be dozens more in the days ahead, most of them newly turned 3-year-olds who are coming out of 2-year-old races where Lasix was banned in 2020.

Orseno wishes they just left everything the way it was.

“There are a lot of things they need to address, things a lot more important than Lasix,” he said. “And now they are picking on the best horses in the country by banning it in stakes races. To me, it just doesn't make any sense.”