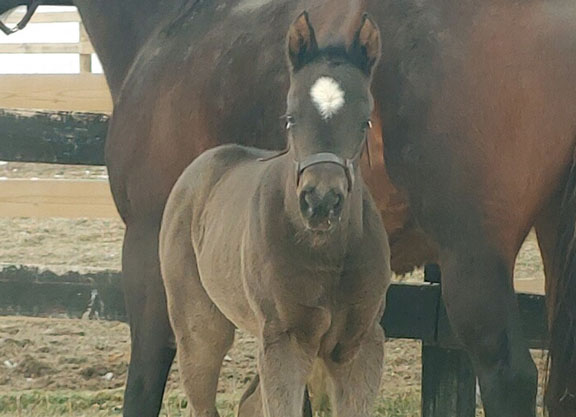 Solomini's first foal, a filly out of SP Another Level | McMahon Thoroughbreds

McMahon of Saratoga Thoroughbreds announced the arrival of the first foal from the first crop of MGISP Solomini (Curlin–Surf Song, by Storm Cat). The filly, out of track record setter and stakes placed Another Level (Emcee), arrived at Hidden Lake Farm in Stillwater, New York, Jan. 15. The mare's first foal is from the immediate family of Grade I-winning millionaire Octave (Unbridled's Song), winner of the GI Coaching Club American Oaks S. and GI Mother Goose S.

“Solomini's first foal out of Another Level is a lovely filly with a lot of body and very nice frame,” said Chris Bernard of Hidden Lake Farm. “3C Stables and Hidden Lake Farm bred 20 mares to Solomini and are committed to his success.”

Solomini, who finished runner up in the GI Breeders' Cup Juvenile and GI Front Runner S. in 2017, crossed the wire in first in the GI Los Alamitos Futurity only to be demoted to third via DQ. He also hit the board in a trio of starts at three, including the GI Arkansas Derby.

The chestnut, who covered 123 mares standing at McMahon of Saratoga Thoroughbreds lasat season, will stand the 2021 season for $5,000, live foal.