Fast Start For Keogh At The Curragh 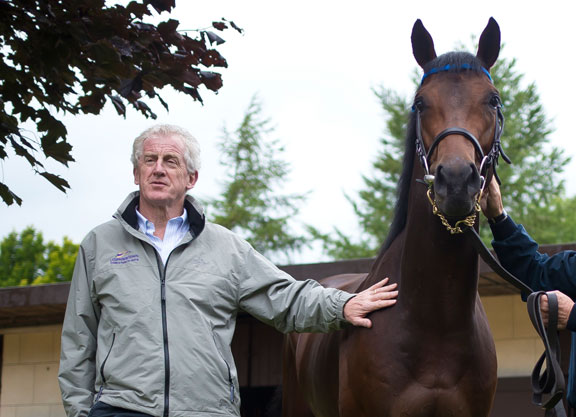 Late last month Pat Keogh, chief executive officer at Leopardstown since 2011, took up the same position at The Curragh upon the resignation of Derek McGrath. The fast nature of that change over means that Keogh will slowly phase out of his Leopardstown role, presiding over both racecourses until the conclusion of Longines Irish Champions Weekend on Sept. 14 and 15.

It is no secret that the redeveloped Curragh Racecourse, unveiled after three years of construction this spring, has undergone some growing pains which have already been addressed by racecourse management. TDN International Editor Kelsey Riley spoke with Keogh on Thursday ahead of his first Curragh meeting in his new job, Friday's Keeneland Phoenix S. card, and Keogh said he is committed to restoring the Irish racing faithful's love of the historic course.

KR: What have been your first priorities since taking up the new role at The Curragh within the last couple weeks?

PK: The Curragh has always had a fantastic racecourse and training grounds; they're famous all over the world. But for the last 20 years, The Curragh has had very poor facilities for racegoers. We now have invested and built a very fine grandstand, which is magnificent. But I suppose with a lot of new sporting venues–and we have seen this before in racing– you're going to have teething problems.

Unlike a football stadium where someone goes to the same seats for the whole match, people move around racecourses, and trying to anticipate people's movements isn't easy. There were teething problems and what we've tried to do is iron those teething problems out and allow everyone to grow to love The Curragh and really establish it in its rightful place in world racing.

There was a feeling where some people said there were too many reserved areas within the racecourse, where the general pubic didn't have access, and we've dealt with that very swiftly. My first race meeting is [Friday] night for the Keeneland Phoenix S., and the public will see changes already when they get there [Friday] night. We've made quite a few changes, we're not finished yet, but we've already made changes and I think that's a signal of our intention to make whatever changes we need.

KR: It was well publicized that there were only 12,000 people on course on Irish Derby day. This highlights a wider problem in racing where we're facing dropping racecourse attendances; what do you think can be done to reverse this trend?

PK: Competition has never been greater. There was a time when you had to go racing to see it, before TV, before you could bet online; you didn't have the option to stay at home and watch racing along with all your other favourite sports. That is a challenge for all racecourses.

But I think there's something else which is also a challenge. This is the entertainment business that we're in and we have to entertain when people come to our racecourses. You're not only entertaining the big racing fans; that racing fan has a partner, they have children and you've got to entertain them too. They're going to watch the racing, but they also want some food and the children want playgrounds or whatever it is. You've got to recognize the needs of a full family audience.

At Leopardstown, we more recently started doing that and the response has been good. You've got to recognize you're not just entertaining the fanatical racing fan who just wants to the see the race and have a bet; you're entertaining the person who is there with their family. It's an entertainment venue and you have to offer as much entertainment as your competitive sports do, or whatever your competition may be–restaurants, the theatre; it's not just sports. We're all chasing after a share of the same wallet.

We're completing our development at Leopardstown in phases, and what we've done has gone well. We're not finished yet but it's very clear that the reaction to what we're doing has been very positive. We're going to increase our capacity at Leopardstown to be able to cater to 20,000 people at the best international standards. In the past the facility has been stretched at about 15,000 people, so we want to make the facilities very good and comfortable for a larger audience. That's what we're doing and we're confident that we're on the right track.

PK: Definitely. Leopardstown is situated in a city which is thriving with a population of one and a quarter million people. The Curragh is in a country environment with nothing like the same audience on its doorstep, but there are a number of big towns like Kildare, Newbridge, Naas and there's very good motor infrastructure in Ireland now so getting from Cork or even from Dublin it's about an hour and a half. Getting there from Tipperary and Limerick, where there are many racing enthusiasts–it's all very accessible.

One thing that we have to do is, the local population in Kildare-and they are avid horse racing fans-we have got to get them on board. If we get them on board, The Curragh is going to be a huge success.

KR: Something Horse Racing Ireland Chief Executive Officer Brian Kavanagh said is, “we need to reconnect with the local community.” Does that resonate with you too?

PK: Definitely. The locals have gone through the three-year development period. They've been supporting The Curragh and going racing through the major development, and after that when the finished product came, it didn't work as well as they thought it would. That has been a big disappointment for the local community. They were always very proud of The Curragh and we have to restore that pride. If I don't do that, I'll have failed.

No matter where you travel in the racing world, be it in America, Australia, Japan, you will meet people that when they find out you're Irish, they will mention The Curragh. They have trained here, been here, or they just know The Curragh's position in the world of racing. It has a huge history and a very proud history and it's known throughout the world, so we now need a facility that does it justice. I'm really looking forward to getting stuck in and making a success of it.

KR: How much longer will you stay with Leopardstown, and how will that change over work?

PK: The move to The Curragh happened very quickly. Derek McGrath, who was involved in the development phase, did a great job in terms of building the facility, and when he left there was a need to get someone in there. I was very honored to be asked to go in and I will be replaced in Leopardstown over the next period of time, but through the Longines Irish Champions Weekend I will preside over both racecourses. Leopardstown and The Curragh work very closely together for the Longines Irish Champions Weekend.

I'll be sad to leave Leopardstown; it's been fantastic and I've really enjoyed myself there. It's been a successful time for the track and we have a very loyal client base there, but it will be nice to go back to Leopardstown when I can go racing and have a drink or two and enjoy myself.