Fairface Gets a Second Chance in Ben's Stall 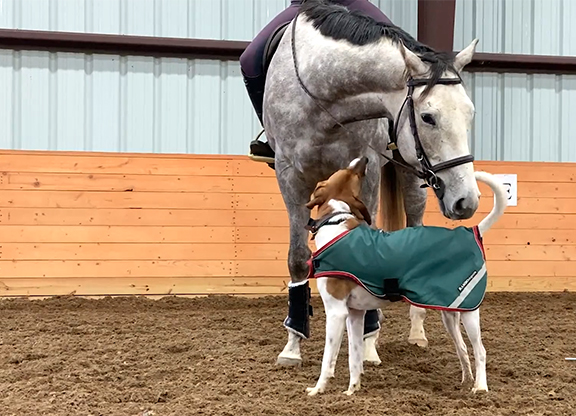 Trying to come to terms with the death of a family member or loved one is one of the hardest parts of the human experience.

The illness and passing of the TDN News and Features Editor Ben's Massam left us all bereft, and as we struggled to make sense of a senseless loss, we looked to find an appropriate way to remember him and allow his memory to help those who needed help in the industry he loved. (Read his story here.)

We settled on the New Vocations Sponsor-A-Stall program, where retired racehorses can get a second lease on life and train for a new career in stalls sponsored by industry participants. Stalls are available to sponsor at $10,000 for 10 years, which has provided New Vocations capital funds for expansion.

Four stalls have been named in memory of loved one; Olivia Saylor, Rick Violette, Ann Britt and now Ben's. His stall was funded by a Gofundme campaign which raised over $15,000 from his friends, co-workers, family, and industry participants, many of whom had never met him but who were moved by his story.

“Those stalls really mean a lot to us here,” said Anna Ford, the Thoroughbred Program Director at New Vocations in Lexington, Kentucky. “Every stall means a lot. But when you walk by a stall that's sponsored in somebody's honor–honoring their life and their memory–it just means a lot more. And it means a lot to see the horses that are thriving in those stalls.”

There was every reason to believe that Fairface, now living in Ben's stall at New Vocations, would thrive at the racetrack. A son of the perennial leading sire Tapit, he was bred by Wertheimer et Frere, who paid $3.1 million for his dam, the Storm Cat mare Honest Pursuit, at the 2009 Keeneland November sale. Honest Pursuit was bred by Juddmonte Farms, and his full-sister is the graded stakes placed Amertume.

He was sent to Todd Pletcher, but when he hadn't made it to the races by the beginning of his four-year-old year, the decision was made to send him to New Vocations.

“He was in training with Todd Pletcher at Palm Beach Downs and Todd sent us a message as he often does when he has a horse that he wants to retire,” said Ford. “He said, `I've got this really nice horse, he's just had some minor setbacks and would he fit your program?' And we went through all the details and absolutely he would fit. He was owned by the Wertheimers who have been great supporters of ours.”

Ford said that Fairface is exactly the type of horse they hope to get at New Vocations-one whose owners realized that for whatever reason, it was time to stop persevering with a racing career. Too often, that happens when it's too late and when a horse's injuries severely limit the kind of post-racing career a horse can have. Injuries also drive up the cost and the time of rehabilitating a horse, limiting the numbers that rescues can process.

It's a message that all rehoming programs, including New Vocations, try to get out to owners and trainers, and one that the Wertheimers have embraced.
“All of us have, at some stage, a racehorse that can't fit the racing program any more and we appreciate the opportunity offered by New Vocations,” said Pierre-Yves Bureau, the racing manager for Wertheimer et Frere. “It's important for people who are not involved in the business to understand that we love and respect our horses. That's why we are proud and happy to offer them a second career.”

Thus far, Fairface appears to making the most of his second chance. He is working on his socialization skills, balance and fitness and had a visit from a masseuse to work out the tightness in his muscles.

“I think we're starting to really see what he can do, and it's looking pretty good,” said Leandra Cooper, the Facility Manager and Thoroughbred trainer at New Vocations.

“Tapits have a little bit of a reputation and people see who their dad is and they're like, `Oh, boy.' It might be a little bit more complicated, but I think that those are the horses who tend to be most special.”

Cooper said that matching such a horse to the proper rider and environment is key to his future success.

“If you can take a horse who is really smart and does his own opinions and might just have a little bit more of an ego and get him on the same team as you and you can develop together, then those end up being really, really special horses,” she said. “I think that's the situation we have with Fairface. He is very smart. He learned how to open his own door within the first day, and he is really playful. He loves attention and he wants to connect with people, but he always wants to be a step ahead.”

Cooper said that the same qualities that will make him “a really awesome athlete” will also provide some challenges to the wrong rider.

“I could easily see the Tapit babies having that sort of bias against them, because they would rise to meet the challenge rather than back down from it,” said Cooper. “He is a really sweet horse, and just needs somebody who can engage that and utilize it and harness it in a productive sort of way.”

For Fairface, an active career is key, she said.

“He could be a really stellar jumper, an eventer, or you could develop him into a nice show hunter. I think he could definitely excel in that show environment, rather than a more low-key home, where he might not be mentally stimulated enough.”

Cooper said that she believed that Fairface would be “scooped up” as soon as he is listed for adoption on the New Vocations site, which should be soon.

“We're just starting to see all that he's capable of, but even so far, he is a star,” she said. “He thrives in that sort of setting where all eyes are on him. He definitely does not shy away from those sorts of situations. He's not intimidated by it. He thinks, `This is how it should be. All eyes on me.'”

Ford agreed. “We were really excited to get him,” she said. “He's the type of horse that we always like to get, but we rarely get. It would've been very easy for him to have been sold privately and maybe raced at a lower-end track, but obviously the owners race at a certain level and decided that the right thing to do was to retire him early and let him go on to be a really nice show horse.”

Said Bureau, “I didn't know Ben myself but I can imagine he was an important member of the TDN team and you must be proud to have his name remembered through the New Vocations program.”