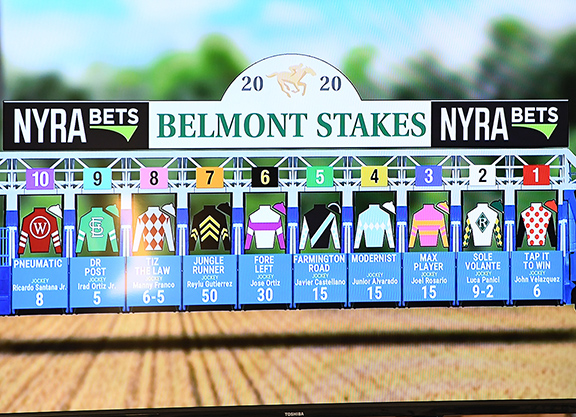 Tiz the Law, also an authoritative winner of last term's GI Champagne S. at Belmont Park, will break from post eight under regular rider Manny Franco in the first leg of the reshuffled Triple Crown going 1 1/8 miles. The 6-5 morning-line favorite is trained by Barclay Tagg for Sackatoga Stable.

Tagg and Jack Knowlton's outfit, of course, teamed up to campaign the popular gelding Funny Cide to wins in the GI Kentucky Derby and GI Preakness S. before being denied by Empire Maker in the Belmont slop 17 years ago.

“He does everything you ask him to, he's very happy and content,” Tagg, sporting a mandatory facial covering, said of the New York-bred before a small group of socially distanced media assembled in the Belmont Café for the draw Wednesday afternoon. “He likes this track, so I'm glad to be back here.”

Tagg added, “It means a lot. You don't get top contenders all the time. He's a nice horse. Hopefully, he's as good as we think. You work every day, seven days a week, you just hope nothing happens and nothing goes wrong. But so far, so good. We're pleased with the way he's been doing and we're ready for the race.”

“I think he really needed that race,” said co-owner Andie Biancone, who also serves as an assistant to her father, trainer Patrick Biancone. “Fitness, wise–he really just improved since that race and he came out super fresh and happy. We were just like, 'You know what? Let's go. Let's take a shot at it.' He's a pleasure to be around and we love him.”

“It would be great to win the Belmont or any Triple Crown race for any trainer,” said Linda Rice, seeking to become the first female conditioner to win a Triple Crown race. “I think Barclay and I were going to fight over numbers five, six and seven. He got the outside. I got the inside. I'm excited about running this weekend.”

Three-time Belmont S. winning-trainer Todd Pletcher will tighten the girth on both Dr Post (Quality Road) (post nine; 5-1) and Farmington Road (Quality Road) (post five; 15-1). The lightly raced Dr Post was a tenacious winner of the Unbridled S. in his stakes debut at Gulfstream Apr. 25 while Farmington Road enters off a fourth-place finish behind Nadal (Blame) in the GI Arkansas Derby.

The speed of the race figures to come in the form of Tap It to Win (Tapit) (post one; 6-1), a sharp wire-to-wire winner in a salty Belmont allowance June 4. The Live Oak homebred will break from the rail with Hall of Famer Johnny Velazquez.

To align with required health and safety measures implemented in New York to mitigate risk and combat the spread of COVID-19, the Belmont S. will be held without spectators in attendance.