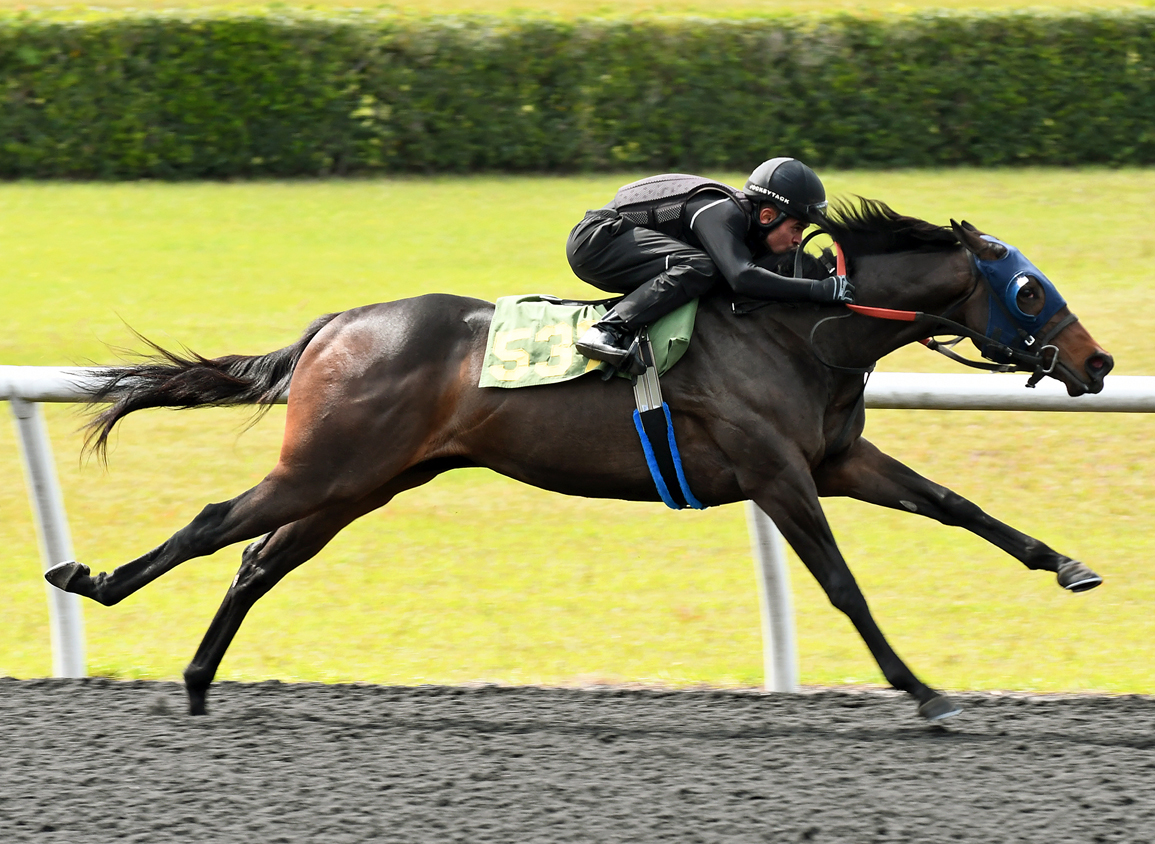 Five juveniles shared the fastest furlong time of :9 4/5 Wednesday during the fourth session of the Ocala Breeders' Sales Company's Spring Sale breeze show and three others worked a quarter in a bullet :20 3/5.

The bullet breeze was an emotional one for Clary Bloodstock principal Jaylyn Clary. The young horsewoman is the daughter of trainer Mike Neathlerin, who passed away in September due to COVID-19. Clary grew up working side-by-side with her father at the track and their training center in Texas. He helped her get her new business off the ground three years ago. Additionally, she trains 15 active racehorses, some for outside owners and some that failed to sell at the juvenile sales.

“My dad already had everything started with our training center in Texas,” Clary said. “About three years ago, we developed Clary Bloodstock and he helped me with that. This will be out first year selling without him. It was bittersweet to work a :9 4/5 without him.”

She continued, “My dad started out training, so if we can't sell them, we train them. The end goal is to always sell, but it doesn't always happen that way. That's how my dad got Kip Deville (a MSW for Neatherlin turned MGISW after a private sale to Rick Dutrow), but then we had [MGSW] Airoforce [an OBSAPR pinhook].”

Clary purchased Hip 537 along with her husband, father and their longtime owner and partner Brad Walker for $80,000 at Keeneland September. Bred by WinStar Farm, the bay is out of MGSW & GISP House Rules (Distorted Humor). Her year-older half-sister Customer Driven (Quality Road) broke her maiden in February.

“We knew she had a really nice pedigree,” Clary said. “We decided if she went for a decent price we would try to get her. She was a really well-balanced filly and she had a presence about her. You could tell she was a very business-oriented filly and that has come through quite a bit. She is all business on the track.”

As for the bullet work, Clary said, “We always knew she was pretty special. She has shown she was fast. She has never backed down from work and always wants to go train. She watches herself and nothing gets her too worked up. She walked up there and showed herself like I knew she would. She laid it out on the track for us.”

Clary added, “She has a good scope, good vet, good breeze and good pedigree. It is all we could ask for.”

Clary's consignment consists of four horses total, including a Dialed In colt, who was he final purchase by her father before his death (Hip 871).

“It is bittersweet, but he would want me to sell the Dialed In,” Clary said. “That's what he would want at the end of the day, so hopefully she works fast and makes some money.”

The trio of :20 3/5 breezers was comprised of a Mizzen Mast filly from Wavertress Stables (Hip 543) (video); a Lord Nelson colt consigned by Jesse Hoppel's Coastal Equine (Hip 548) (video); and a Distorted Humor colt from the Pick View shedrow (Hip 671) (video).

Hip 548 is from the second crop of the late MGISW Lord Nelson. Hoppel acquired the dark bay for $80,000 at the Keeneland September sale. The Arkansas-bred is a half to MSP Macho Miah (Macho Uno).

“He looked like a good individual [at Keeneland] and something that would grow up into the type of horse we want to sell as a 2-year-old,” Hoppel said. “He is one of the better individuals we were bringing out here. I knew he was going to be one of my stars for April back in January. It was becoming pretty apparent that he was going to be a nice horse.”