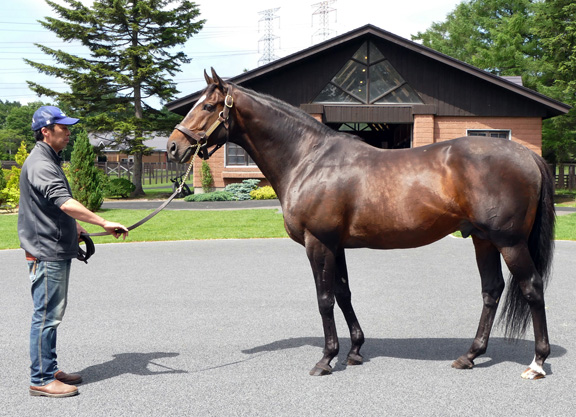 Tabbed the 5-1 fourth choice, Efforia (Jpn) (Epiphaneia {Jpn}) entered the Japanese Classic picture with a bang in the G3 Kyodo News Hai at Tokyo on Sunday.

Rank from the stalls, the bay was full of energy before relaxing into fourth as early pacesetter Deep Rich (Jpn) (Deep Brillante {Jpn}) was overcome by Heart of a City (Jpn) (Heart's Cry). Shifted out to the center of the course for the stretch drive, he was given a right-handed reminder and strode away to win by 2 1/2 good-looking lengths. Victipharus (Jpn) (Heart's Cry {Jpn}) closed to take second, a head in front of second favourite Shahryar (Jpn) (Deep Impact {Jpn}).

Efforia donned cap and gown at first asking in a 2000-metre newcomer event last August before claiming another 2000-metre race-this time at Tokyo on Nov. 8.

The second foal and first winner for his three-time winning dam, Efforia has a juvenile half-brother by Harbinger (GB), and a yearling filly by Maurice (Jpn). Katies Heart was covered by Satono Crown (Jpn) in 2020.