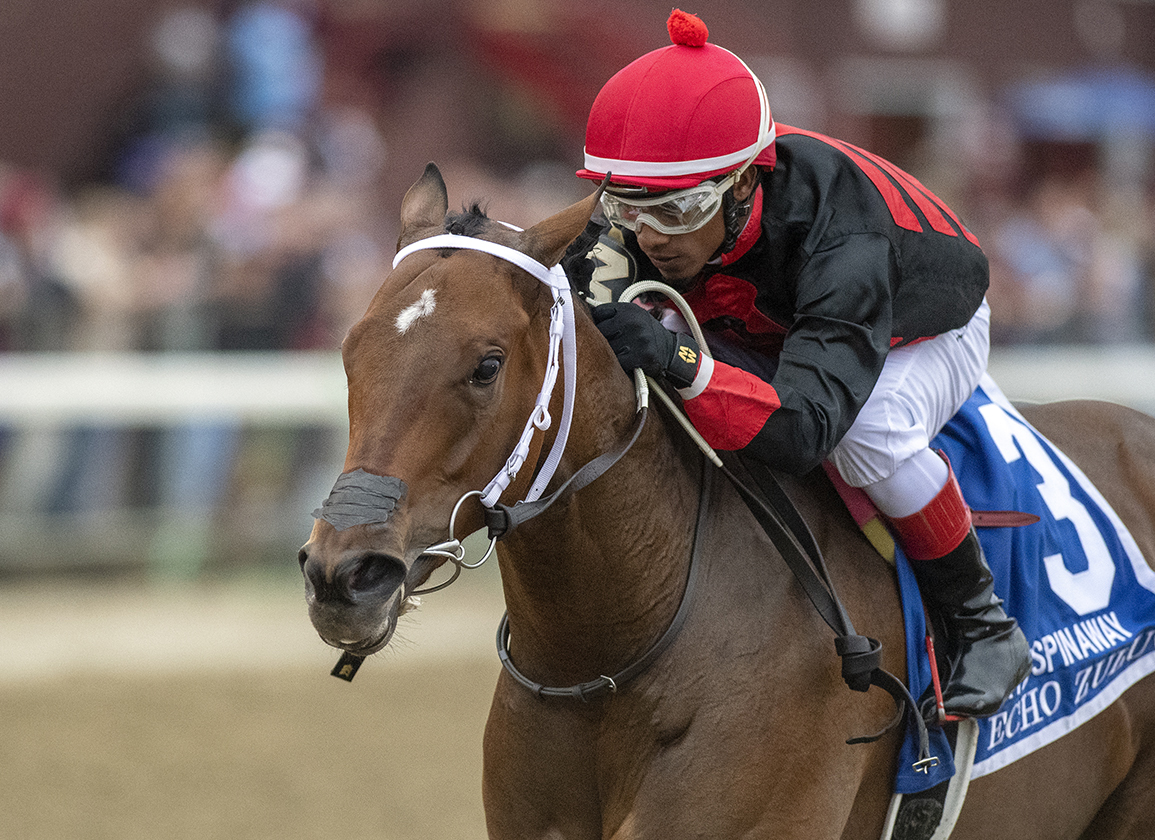 Undefeated champion and 'TDN Rising Star' Echo Zulu (Gun Runner) makes her highly anticipated seasonal bow Saturday in the GII Fair Grounds Oaks. Flashing her talent with an impressive debut at Saratoga July 15, the $300,000 KEESEP acquisition had things her own way from start to finish in that venue's GI Spinway S. Sept. 5, winning by four lengths. She took no prisoners next out Belmont, romping by 7 1/4 lengths in the GI Frizette S. Oct. 3 and was equally dominant in the GI Breeders' Cup Juvenile Fillies S. at Del Mar Nov. 5. Her flawless season left no doubt of her status, making her the clear winner of the Eclipse award for top juvenile filly. With this delay to her sophomore season, Echo Zulu needs a victory to secure a spot in the GI Kentucky Oaks.

“We are excited to get started with her,” trainer Steve Asmussen said. “She is doing extremely well. She has put in some impressive moves over the race track and she just trains beautifully like she always has.”

He added, “She drew the rail so we have to get away from there cleanly and Joel will have a good ways to the first turn to get her in good position. She has handled everything extremely well that we have thrown at her up to this point. We are giving the Fair Grounds Oaks its fair due. I don't want to talk about the next one until she runs in the Oaks here but certainly we have high hopes this year for her.”

Turnerloose (Nyquist) enters off a win in the local GII Rachel Alexandra S. Feb. 19 at odds of 17-1. Opening her account with a pair of wins on grass, including the Aristocrat Juvenile Fillies S. at Kentucky Downs in September, the dark bay was third in Keeneland's GII Jessamine S. Oct. 13, but faded to 14th in the GI Breeders' Cup Juvenile Fillies Turf S. Nov. 5. She was making her first start on dirt last out in the Rachel Alexandra.

Hidden Connection (Connect) graduated by 7 1/2 lengths on debut at Colonial Downs in August and ran off to a 9 1/4-length score in the GIII Pocahontas S. at Churchill Sept. 18. Fourth to Echo Zulu in the Breeders' Cup, she filled the same spot behind Turnerloose in the Rachel Alexandra.