Easy Pickings For Palace Pier In the Lockinge 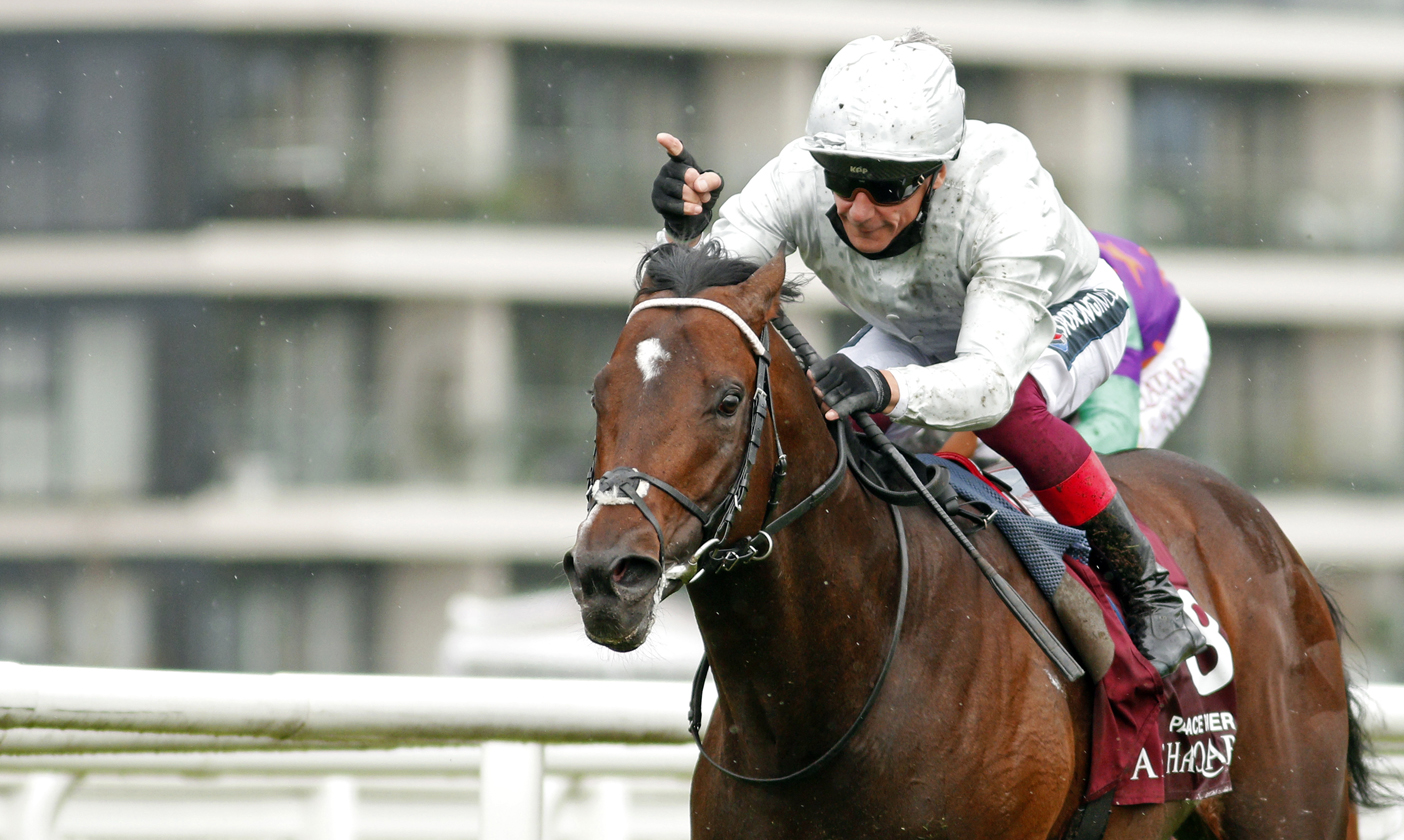 Frankie Dettori could afford to be at his showboating best at Newbury on Saturday, with TDN Rising Star Palace Pier (GB) (Kingman {GB}) in imperious mood as he gave his evergreen rider the ideal big-race thrill in the G1 Al Shaqab Lockinge S. Hot property as the 1-2 favourite following his eight-length comeback success in the Apr. 23 G2 Sandown Mile, Sheikh Hamdan bin Mohammed Al Maktoum's G1 St James's Palace S. and G1 Prix Jacques le Marois hero travelled typically smoothly in the early stages despite ending up towards the rear after receiving an early bump. In the event, the normally laid-back dude could have afforded his mostly outclassed rivals even more of a headstart as he was on their case with uncharacteristic alacrity as soon as Frankie moved in the saddle approaching three out. Once his jockey had indulged in two lengthy glances behind and to his left, Palace Pier was off and away and by the two pole there was an air of the ridiculous about a renewal that so many had believed was deep and competitive. Thankfully, the filly Lady Bowthorpe (GB) (Nathaniel {Ire}) saw to it that he had to gallop out to the line but as she pulled away from the rest it was clear that she was only keeping the winner marginally occupied. At the line, there was as comfortable a 1 1/2-length margin as is possible, while the progressive and smart yardstick Top Rank (Ire) (Dark Angel {Ire}) 5 1/2 lengths away in third and clear of the main pack. “What he did between the three and the one was mindboggling,” commented Dettori, who has begun 2021 as he left off last year by taking two of the three domestic group 1s staged so far. “He usually hits a flat spot, but he just took off today and was just a bit bored in front.”

Oozing talent at two, Palace Pier had a way of making his racing look easy in a brace of outings over seven furlongs at Sandown before any fancy plans were offset by a minor tibia injury. Missing the G1 2000 Guineas as a result, he instead went for a mile handicap on the same day on Newcastle's Tapeta and did enough there and in the interim to earn a tilt at Pinatubo (Ire) (Shamardal) in the St James's Palace S. Outstaying Godolphin's champion there before overcoming soft ground to upstage the G1 Coronation S. heroine Alpine Star (Ire) (Sea the Moon {Ger}) in the Jacques le Marois, his final 3-year-old start was in the G1 Queen Elizabeth II S. but little went to plan in deep ground there and he could only manage third on three racing plates.

While crack milers like his own sire, the moment the gears shift is often a brief one but Palace Pier's performance on his seasonal bow at Sandown last month was of a different ilk. Ultimately undeniably impressive as a wide-margin winner there, he could not be described as push-button but this slicker display may have delayed the move to longer distances that was immediately touted for him after that race. Frankie may have lost his beloved Enable (GB) (Nathaniel {Ire}), but he has a rare talent on cue again to head to his favourite meeting along with Stradivarius (Ire) (Sea the Stars {Ire}). “These kind of horses don't come along very often,” he said. “This is what champions can do, they make other horses look moderate and pass them like they are standing still. It's an amazing feeling and a nice surprise, as he is very deceptive–he's so lazy in the mornings so I didn't expect him to do that. He took five lengths out of the field and was in front a long way out with a headwind.”

Dettori is convinced he can do more. “He is 100% up there with the best milers I've ridden, but he's probably got to win another couple of group 1s to say he's the best,” he added. “He has low mileage and is just learning. I love the horse–he's a very happy horse and great to be around in the mornings. He saves his best for the races and mentally he's grown up and knows how to run his race now. He's a joy to ride, like a hovercraft on water and everything went so smooth.”

John Gosden said, “He relaxed well in the race and having been a little bit squeezed leaving the gate, Frankie said he got back further than he wanted. He came through very nicely and had to go, then he got a little bit lonely looking around in front having picked those others off so fast. A lot of them do get quicker with age and there's no doubt he accelerated more than Frankie expected, with the filly running a great race to be second. He hasn't been over-raced, so is on an upward curve and I think he would get a mile and a quarter as he relaxes so well.”

“With his father, if you told me I had to change his trip I would have brought him back to six for a July Cup–he had that kind of speed–but a change for this horse would mean going up two furlongs,” Gosden Sr added. “We'll see, but it's pretty obvious at this stage to go for the [June 15 G1] Queen Anne [at Royal Ascot] and think about it after that. I could see the Juddmonte International as a very possible target for him, as Royal Ascot to the Eclipse is very tight with 16 days being quite tough if they've had a hard race. Although the Juddmonte would be a strong possibility, there is a little race in France called the Prix Jacques le Marois at the same time, but getting to France is quite difficult now. He has a bundle of class and is a good character like his father. An exciting horse.”

Lady Bowthorpe's trainer William Jarvis was fully rewarded for his decision to send the runner-up into battle here and he was left pondering what damage the G2 Dahlia S. winner could do back among her own sex. “We're absolutely delighted and very proud of her,” he said. “We knew what we were taking on with Palace Pier, but she's finished five lengths clear of the third and so it was a great performance. It's funny, because when Ryan Moore finished unplaced on her in a Newmarket handicap last year we were left scratching our heads, but she got no run and Ryan said she was definitely listed-class and probably a group filly. She's special and is going back against fillies in races like the [June 16 G2] Duke of Cambridge [S. at Royal Ascot] and the [G1] Falmouth [S. at Newmarket July 9].”