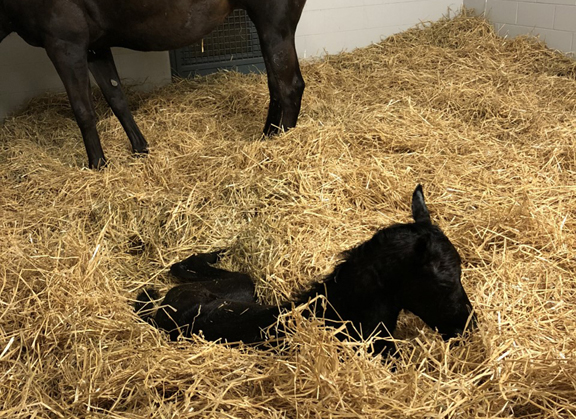 Essential Quality as a foal | Godolphin

LOUISVILLE, KY – With the first Saturday in May quickly approaching, TDN Senior Editor Steve Sherack caught up with the connections of leading GI Kentucky Derby contenders to get some of their 'Early Impressions.'

In this edition, we check in with: Godolphin USA President Jimmy Bell and Winter Quarter Farm Owner/General Manager Don Robinson.

Rock Your World (Candy Ride {Arg}) switched to dirt with aplomb, running his record to a perfect three-for-three for John Sadler with a dominating, front-running performance in the GI Runhappy Santa Anita Derby. Bred in Kentucky by legendary trainer Ron McAnally and his wife Deborah, Rock Your World brought $650,000 from bloodstock agent David Ingordo on behalf of Hronis Racing and Talla Racing out of the Winter Quarter Farm consignment at the 2019 Keeneland September Yearling Sale. McAnally trained the brilliant Candy Ride as well as owned/bred/trained Rock Your World's MSW & MGISP dam, Charm the Maker (Empire Maker).

“From the time Essential Quality hit the ground as a foal, he's never had an awkward day or stage in his life. From every picture you look at of him–his foal, yearling and 2-year-old pictures, to right now–he's just always been a very balanced, athletic individual. And that's just rarely the case. Most of these horses go through phases and stages, and we say, 'Well, give 'em a little time. The front end will catch up with the hind end, or just wait until they fill out.'

Early on and throughout the whole [breaking-and-training] process, Niall [Brennan] said, 'He could do whatever you want him to do. Whatever you ask for, it's there.' After his first work, I remember walking back to the barn with Brad [Cox] at Keeneland and he just shook his head and said, 'This one is different than the rest of them.' He's never had that awkward stage and always had that athletic look. You know those are far and few between.

Vicky Van Camp in our office named him. Every employee on the entire farm is asked to and invited to submit names. It's kind of a neat thing. There's a lot of names that come in and she does a great job of handling all that as well. It's a good phrase–Essential Quality–and there's a pretty good tie-in to the dam's side, too. It's great that he has a nice name because it does play well.” –Jimmy Bell

“I had two really nice Candy Rides that sold together that day [during the fifth session at KEESEP]. One [the unraced Contango], brought a million dollars and topped the session and Rock Your World brought $650,000. It was a wild day.

Interestingly, Rock Your World, to me, really looked like the two-turn horse, without question. He wasn't going to be ready tomorrow for a 2-year-old sale, but he was really all there. Very elegant, Classic-looking horse. This whole family gets gorgeous, good-looking performing Candy Rides. Boy, Ron's family really seems to connect. And it's fascinating because Ron trained Candy Ride, so it's really cool. I've had four generations of this family for the McAnallys. That's just wildly rewarding if you're a breeder, there's nothing better. They're performers.

Rock Your World looked the part. His mother could really run, Charm the Maker. He was just a nice horse from the beginning. He was an extraordinary Candy Ride, and when the [sale] selectors came and looked at him, he was one that goes right to the top of the list. I like the sales to get going though, so I asked them to put him a little further back in the book. I thought he would be a knockout and it really worked.

Horses like that don't miss buyer's attention. They just don't. He really did well that day. David Ingordo is very shrewd and identified and wanted that horse. David was committed and ended up buying him. I've said the joke before–David found Zenyatta [$60,000 KEESEP yearling graduate from Winter Quarter Farm consignment in 2005]… this one cost him more [laughs].

I had heard about Rock Your World getting ready to run and you know there are a lot of talking horses. But I'd heard really good things about him and thought he'd run well. Ron's assistant Dan Landers was telling me, 'Boy, Sadler's horse can run.' It makes me pretty nervous that the fourth race of his life is going to be the Kentucky Derby. But it's very exciting.” –Don Robinson