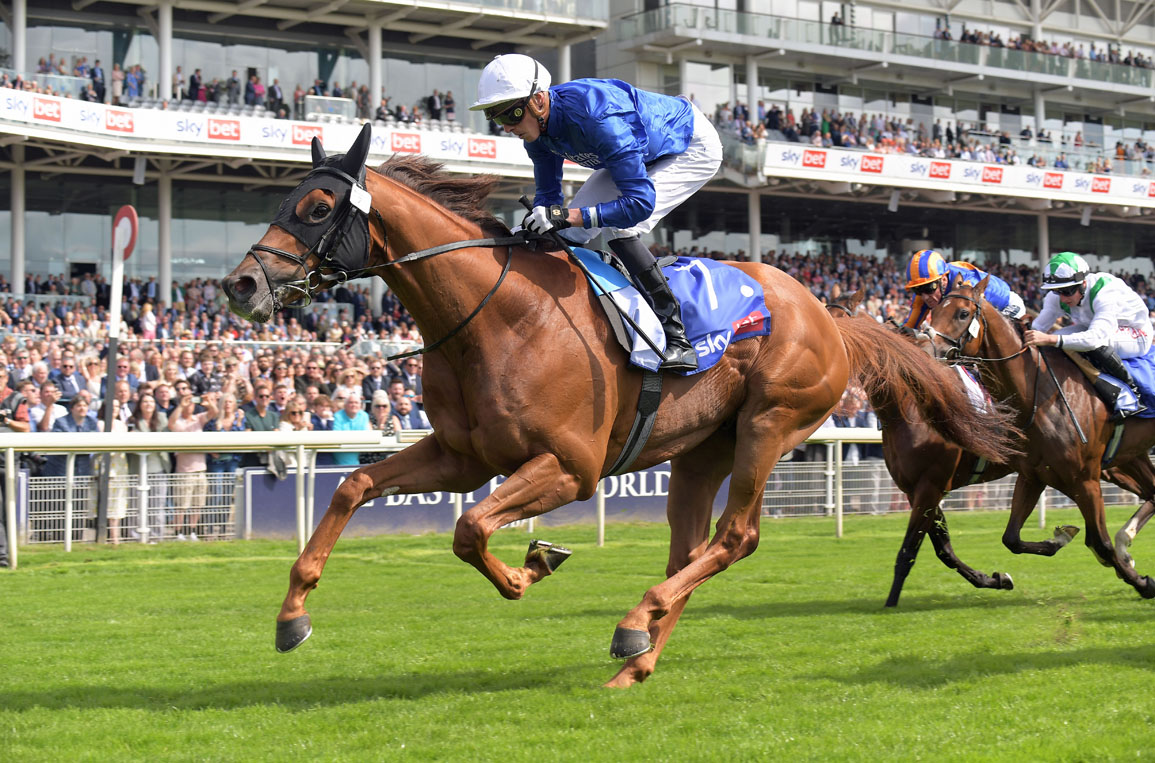 Further evidence that Charlie Appleby holds all the aces in the 3-year-old middle-distance colt department was in plain view on Wednesday as Yibir (GB) (Dubawi {Ire}) had his turn on the Moulton Paddocks carrousel of success in York's G2 Sky Bet Great Voltigeur S. Backed into 6-1 before the off, the July 8 G3 Bahrain Trophy winner who was last seen finishing sixth in the G3 Gordon S. over this 12-furlong trip at Goodwood July 29 was dropped out in rear early by James Doyle as Ballydoyle's outsider The Mediterranean (Ire) (Galileo {Ire}) set a searching pace. Making up the margin with ease to take command approaching the furlong pole, the chestnut stayed on to secure a 1 1/4-length success from the long-time leader, with Youth Spirit (Ire) (Camelot {GB}) half a length behind in third. “When Yibir is like he was today and in the Bahrain Trophy, he is pretty straightforward,” Doyle said. “He drops his head and relaxes really well. We wanted to get the first part of the race right and then build away from there. It couldn't have worked out much better, really. He has won the Bahrain Trophy and stays very well, but he has got quite a potent kick.”

Yibir came back from a juvenile campaign which culminated in success in Newbury's prestigious Haynes, Hanson & Clark Conditions S. to run third behind Alenquer (Fr) (Adlerflug {Ger}) and Adayar (Ire) (Frankel {GB}) in one of the strongest renewals of the G3 Sandown Classic Trial of recent times Apr. 23. Dropping his level when fourth in Chester's Listed Dee S. May 6 and when four-lengths second to the subsequent G1 Irish Derby runner-up Lone Eagle (Ire) (Galileo {Ire}) in Goodwood's Listed Cocked Hat S. May 21, the imposing homebred was gelded and showed instant benefit by dominating the 13-furlong Bahrain Trophy at Newmarket's July festival before flopping again in the Gordon.

With William Buick on the G2 Queen's Vase winner Kemari (GB) (Dubawi {Ire}), James Doyle was able to extend his tally to three-for-three on Yibir as that stablemate and another notable contender in High Definition (Ire) (Galileo {Ire}) failed to fire. With the G1 Grand Prix de Paris fourth The Mediterranean and the Juddmonte International runner-up Alenquer upholding the form of the current hot favourite for that Doncaster Classic in Hurricane Lane (Ire) (Frankel {GB}), it may be this edition diverts from its usual guise as a font of St Leger candidates. Yibir, who is unable to line up in the final Classic, came from the back in a first-time hood here along with the Gordon runner-up Sir Lucan (Ire) (Camelot {GB}) and Youth Spirit and the race was ultimately run perfectly to suit.

Appleby is looking at a tilt at Belmont's GI Jockey Club Derby Sept. 18 with Yibir. “We've always held him in high regard, because he is such a powerful galloper in the mornings and I have to give a lot of credit to Shane Fetherstonhaugh, who rides him and all the team at home who have handled him,” he said. “The plan was always to leave the hood on today, bury him and get him racing the right way round. He is gelded, so we plan to have him around hopefully for the next few years and I thought it was important to get him racing back in the right manner. He is in the [Sept. 12] G1 Irish St Leger [at The Curragh], but one of our potential plans was to go to North America with him for the Jockey Club Derby. I think he would take a lot of experience there–he hasn't missed a beat this year and is a horse with some constitution. Hopefully, he can become one of those fun international campaigners. I'm disappointed with Kemari, as the drop in trip was not a concern beforehand and he didn't gallop out. We'll see if anything comes out in the wash.”