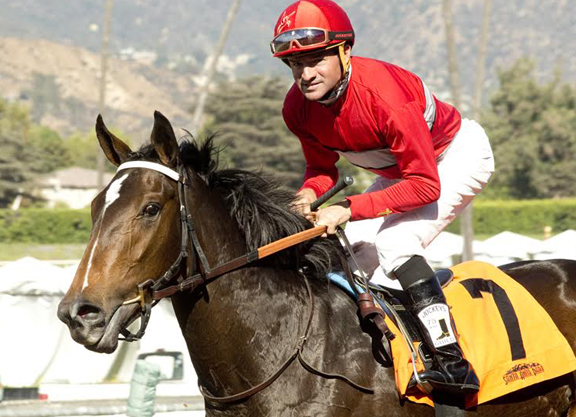 When racing returns to Santa Anita Dec. 26, it does so in a blitzkrieg of high-octane firepower, with races like the GI Malibu S., GI La Brea S. and GI American Oaks luring headline grabbers from across the country.

As things go, race three on the card–a $16,000 claimer–is a far less exulted companion to its starrier cousins. But the race contains its own prodigal return…that of Hall of Fame jockey Kent Desormeaux after a hiatus from the saddle. Still, it's just the sort of low-key call to arms the jockey is looking for.

“It's not something you get control of and go tell the world about your accomplishment,” said Desormeaux, of his newly established sobriety after a tumultuous six-month period culminating from decades of struggle.

“I can honestly say it's been 25 years since I've been clean this long,” he said.

It was back in July that Del Mar management barred Desormeaux from the grounds following an off-site incident in which the jockey was accused of using a racial epithet in a fight.

The following September, the Del Mar stewards suspended the jockey for 15 days for “disorderly conduct–racial slurs, aggressive behavior.” He was also ordered to be evaluated by the Winners Foundation, which helps backstretch workers deal with substance-abuse problems, and “abide by the recommendations of that organization.”

Desormeaux explained that he subsequently enrolled in a three-month rehabilitation program at a local facility. It's not the first time the jockey has sought professional help for his substance abuse issues–another stint was as recent as 2016. But this has been the most concerted effort yet, he said, to wrestle the demons under control.

“This one was not a resort. It was not a vacation. It was not intended to buy some time,” he said. “I learned a lot about myself and came back to reality. There's a lot of people who certainly care about me, love me and they were deeply concerned.”

One of those family members who has proven resiliently loyal is his brother, trainer Keith Desormeaux, for whom the jockey has two mounts at Santa Anita Saturday and Sunday

“He has always had my best interest at hand,” said Desormeaux. “He has long told me that what I've just gone through was needed for quite some time. He's not sticking by me just this weekend. He's stuck by me through thick and thin before.”

Desormeaux explained that, as a condition of his license, he is required to undergo routine testing.

“I have a very restricted license,” he said. “I get tested often, and there's not enough lapse of time for me to use ever. I can't use at all. Not weekends. Not days off. At all.”

The plan moving forward is very simple, Desormeaux said. “Sticking to the program,” he said, in reference to both alcohol and narcotics anonymous meetings. “You know how they say, 'you live to learn and learn to live?' I've learned how to live, and now I can move on and live to learn.”