Home » Archive » Top News » Derby Wrap: Authentic ‘Not Even Tired’, On to Preakness

Derby Wrap: Authentic ‘Not Even Tired’, On to Preakness 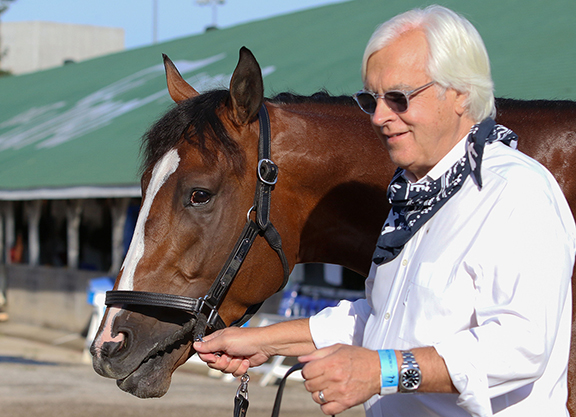 A day after picking up his record-tying sixth GI Kentucky Derby win in a renewal as unorthodox as they come, trainer Bob Baffert said victor Authentic (Into Mischief) “wasn’t even tired” Sunday morning after going wire to wire and turning back odds-on Tiz the Law (Constitution) in Saturday’s Run for the Roses.

“I couldn’t believe it, I thought he might be a little tired today,” Baffert said. “He came out of it well.”

The triumph for Baffert was plenty unorthodox as well. After appearing to have a strangehold on the Derby in the spring, Baffert lost top contenders Charlatan (Speightstown) and Nadal (Blame) to injury. Late bloomer Uncle Chuck (Uncle Mo) then finished up the track in the GI Runhappy Travers S., eliminating him from Derby contention. Finally, in the Churchill Downs paddock Saturday, his Thousand Words (Pioneerof the Nile) flipped and had to be scratched, leaving Authentic as his lone starter. The incident sent longtime Baffert assistant Jimmy Barnes to the hospital with a broken wrist, adding one final touch of emotion to Authentic’s win.

“Jimmy is going to need surgery, I think he’ll need eight screws in his wrist but he actually was here this morning. He’s a trooper,” Baffert said. “I was so emotional yesterday because I wanted him to be there. To me, that was most emotional Derby I’ve ever been involved in because of what happened during that little time frame. It was the most crazy 30 minutes I’ve had in racing.”

“Before May, I was looking so strong and then everything just went wrong,” Baffert continued. “And to pull it off like that was really exciting. Winning the Kentucky Derby is the biggest moment in a trainer’s life. When you win it, it erases everything that has gone bad.”

The late scratch of Thousand Words also affected Spendthrift Farm, which co-owns the colt with Albaugh Family Stables and co-owns Authentic with My Racehorse, Madaket Stables and Starlight Racing.

“It was all so unbelievable. I walked over with the Albaughs and we’re all enjoying the moment and then, the next thing you know [Thousand Words] exploded and went over,” said Mark Toothaker, stallion sales manager of Spendthrift Farm. “The state vet walked over and said he was a scratch. So you had all the emotion of, you are within 20 minutes of having a horse getting ready to run in the Kentucky Derby that we picked out and we’re so excited and as we were walking through the tunnel, I said to our general manger Ned Toffey, ‘If there is a Derby God out there, maybe we can win.’ For Authentic to just keep giving it in the stretch, it was like he had an extra push.”

A trip to Baltimore for the GI Preakness S. Oct. 3 is slated as the next objective for both Authentic and Thousand Words, as the latter escaped his paddock fall without injury. Baffert said both colts will head to the shedrow of Hall of Famer D. Wayne Lukas to stay for the next few weeks so Baffert doesn’t have to ship them back to California in the interim.

“Being that the Preakness is a few weeks away, I thought it might be too hard on them to go back. So I have an assistant trainer, this D. Wayne Lukas guy here,” Baffert joked. “So they’re going to be in Wayne’s barn. We’re going to run them out of here. If they’re working well and all going well, they’ll go to the Preakness. I didn’t want to take them all the way to California and back. I want to give them every opportunity. We’re planning on [running] both if they’re doing well. Thousand Words, we’ll give him another chance at it. He didn’t have a scratch on him.”

Barnes Back in Action Sunday Morning

Barnes was back to work dark and early Sunday morning, albeit in a compromised capacity. He said he wasn’t going to say anything about his broken right wrist Saturday until he rolled up his sleeve and saw it at the wrong angle.

“When it happened, I wasn’t going to say anything. I was going to say I was OK. I knew it kind of hurt,” he said. “Then I pulled my sleeve up and saw it was pointing a different direction. So I pulled it back down and said, ‘I better say something.'”

Barnes watched the Derby on a phone in the ambulance on his way to Norton Audubon Hospital. He said the ER personnel knew he was connected to the Derby winner, and that the ER doctor actually was a co-breeder of Baffert’s two-time Breeders’ Cup Sprint winner Midnight Lute (Real Quiet).

“He didn’t surprise me, the way he trains and the way you watch him move,” Barnes said of Authentic. “He’s just this big leaper. He’s got a huge stride on him. He just got out there motoring along. Johnny V rode him superbly. He committed early and if you’re going to go with him you’re going to be running fast. So they kind of backed off a bit, from what I saw. For him to straighten out and switch leads, because you look at his earlier races and he was very erratic in the stretch in numerous races. But Johnny V, when he pulled his stick through to the left hand and got after him, boy, he just leveled out and said, ‘They’re not going by me today.'”

Asked about the roller coaster of breaking his wrist in a scary paddock accident and then winning a Derby less than a half-hour later, Barnes said of horse racing, “You can be on the floor and then be up in the sky soaring.”

Tiz the Law in Good Shape, Next Start Undetermined

Sackatoga Stable’s beaten favorite Tiz the Law is scheduled to return to New York Tuesday with plans for a next start to be determined.

“I just looked him over,” trainer Barclay Tagg said. “His legs are good. He ate good. Everything’s good.”

The four-time Grade I winner, who went off as the 7-10 chalk Saturday, sustained only the second loss in his eight-race career, with both setbacks coming at Churchill Downs. He was third in last November’s GII Kentucky Jockey Club S. on a sealed sloppy track.

“The jock [Manny Franco] said that when he really had to get down and run, he was kind of swimming on that track. He didn’t like the track,” Tagg said. “You could see it in the stretch. He looked like he was going to go on by and win easy. His last [Beyer] number was a 109 [in the GI Runhappy Travers S.]. He bounced down to a 103 this time … I don’t want to say too much about the Preakness. I just want to see how he is. He’ll go back to New York and we’ll evaluate him.”

“He ran good and came out of it great. I was over at the barn this morning and all is well,” principal owner Jack Knowlton added. “I’ll have [the Preakness] discussion with Barclay and we’ll take a little time to see. My thinking is that we will [go], but we’ll have the horse dictate what’s going to happen. Certainly that would be my preference but we’ve just go to see how he comes out and see how he works when we have the next work in a couple weeks. We’ll have time for a couple works.”

According to the Pimlico notes team, longshot third finisher in the Derby Mr. Big News (Giant’s Causeway) is likely headed to Baltimore. The three horses who had to scratch the week of the Derby–Art Collector (Bernardini), King Guillermo (Uncle Mo) and Finnick the Fierce (Dialed In)–are also Preakness-bound.

The Federico Tesio S. Monday at Laurel is a ‘Win and In’ qualifier for Triple Crown-nominated horses to the Preakness. Happy Saver (Super Saver), undefeated in two career starts for trainer Todd Pletcher, is the 1-2 program favorite for the 1 1/8-mile Preakness prep.