Derby Colt Has Westwind in His Sails 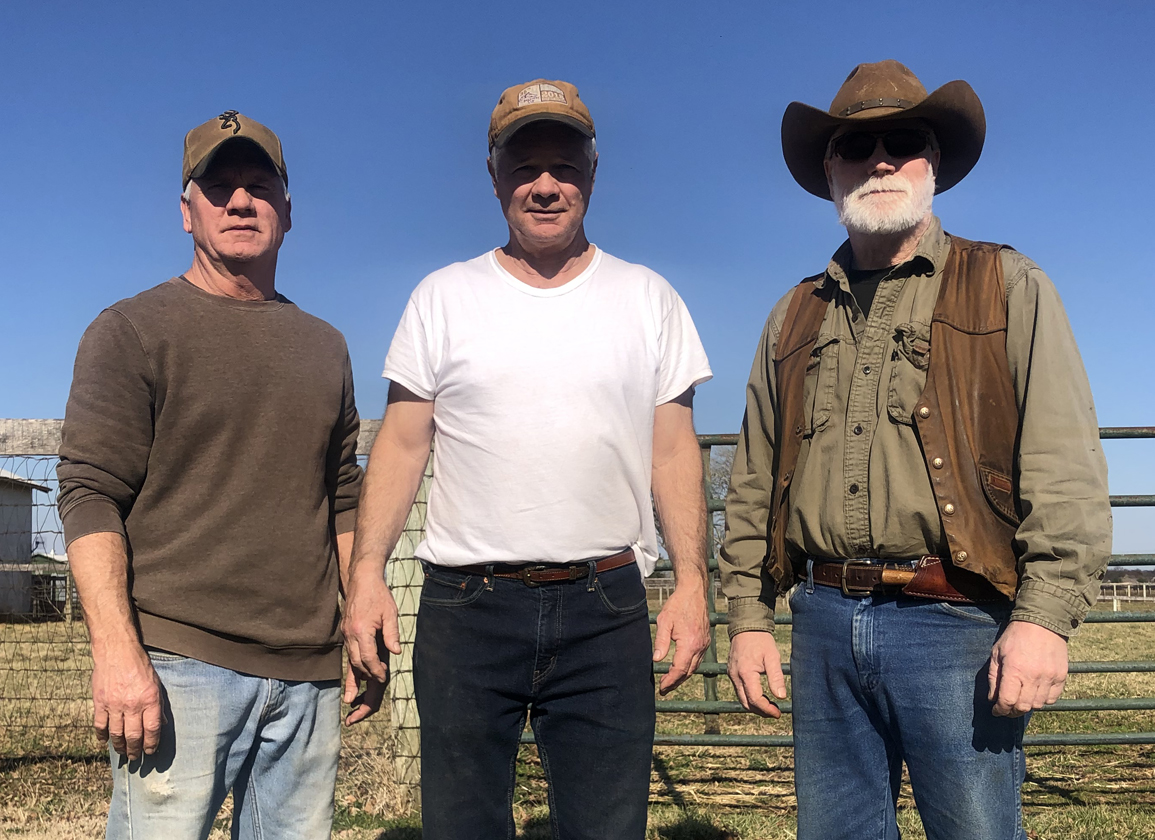 Their grandfather first invested in horseflesh when just 14 years old.

“I remember him telling me about an oil boom they had in Warren County,” Mike Harris recalls. “Back then, the oil rigs were just pulled around on skids, and they'd hire somebody with a team to pull them from location to location. So he started out with one team, and then he hired a couple of his buddies and bought two more, and soon they were moving these rigs all over the county. So he was quite a businessman from a young age.”

With time, his commercial flair made J.R. Bettersworth a conspicuous figure around southern Kentucky. Though he had gone to school riding a wagon, a different kind of horsepower would soon dominate the American landscape: he duly set up a car dealership, an electrical supplies business too. Eventually he was able to buy a farm that had been in his mother's family for generations already when they had to stage an estate sale.

Around 1965 he introduced Thoroughbreds, having always maintained five or six Saddlebreds to show round the county fair circuit. It is with due pride, then, that the maternal grandfather's surname has always prefixed the Bettersworth Westwind Farms consignment at Keeneland. Run in partnership by Harris and brothers Brent and Kevin, along with sons Justin and Taylor, Westwind lies some 150 miles southwest of Lexington on the way to Nashville. While foaling out no more than 17 or 18 mares this spring, they reckon on putting 30,000-35,000 miles on the trailer every year just commuting to the Lexington studs.

It was on this same road, in fact, that Harris in 1979 endured a trauma that ripped a void in the family while also tightening its bonds.

Fresh out of college, he was riding in the trailer on the way to the September Sale when a yearling broke its halter ties and got out of its stall. He flagged down his uncle, who pulled over and lowered the ramp.

“We were backing the yearling into the stall but about halfway it reared up and my uncle stumbled on the ramp and fell on the ground,” Harris recalls. “That left the yearling with nobody holding on, and it kind of lunged out there and landed on the back of his rib cage. He got up and said, 'I'll just go to the hospital to get checked over real quick, and I'll meet y'all out at Keeneland.' But they kept him in there and somehow or other he got an infection in his bloodstream, he just went downhill and only lived another five or six days.”

Grandfather Bettersworth had at that point been looking to step back, but the tragedy now had a double effect: one was to fast-track Mike and, in due course, his younger brothers as they too finished their educations; the other was to make the old man an even more precious mentor for the remaining 10 years of his life. But that episode, harrowing as it must have been, never tainted the family's affection for the horse, nor its collective sense of vocation.

“I never really did think about it like that,” Harris says. “Of course, with my uncle gone, I had to fill shoes probably earlier than I was ready for. But we all just kept it going. My grandfather had to come back into the day-to-day a bit more, looking over my shoulder and helping me to figure everything out. I'd been around horses all my life, I think I was actually riding before I could even walk, and my brothers are the same. But I did learn a lot from being around my grandfather every day.”

Even so, it hasn't been easy. If you can't afford elite mares, or elite covers, then a modest herd like this is under constant pressure to come up with that occasional home run, simply to keep the show on the road. There have been times when the family has wondered whether the 300 acres devoted to the horses should go the way of the other 700 acres, which are let for arable use. And they were never closer to the brink than in 2020, when they actually started drawing up a list of mares to discard through the January Sale.

That September, however, the ship was steadied by a colt from the second crop of Not This Time out of a Candy Ride {Arg} mare, then 13, named Silent Candy.

“All this mare's foals tend to be real immature-looking, early in the year, and it was the exact same thing with this one,” Harris recalls. “It's not so much that he was late maturing, just it was probably June or July before he really filled out. But he was always extremely well balanced, and of course for him to bloom right at sale time was actually perfect for us. By the time we got him there he was a sight: a real athlete, with a real fluid way of walking, like a cat. And we weren't the only ones that thought that. There was a lot of activity on him at the sale. It's gratifying when other people make as much of a horse you raise as you do, and we got a real good price.”

Yes, they did: from a $15,000 cover, they realized $260,000 for hip 1956 from Winchell Thoroughbreds. The Harris clan were delighted to see him sent to no less a trainer than Steve Asmussen, who saddled him to break his maiden on his second start at Churchill in November before romping in the Gun Runner S. at the Fair Grounds. Though nailed on the line after seeing off competition for the lead in the GIII Lecomte S., he has meanwhile confirmed himself an authentic Derby colt when coasting home from a deep field in the GII Risen S.

For this, of course, is Epicenter–whose pedigree, which we explored last week, virtually guarantees better still over a 10th furlong; and whose upbringing, according to a lore honed from one generation to the next, will enable him to stand him toe-to-toe with any rival raised in more fashionable tracts of the Bluegrass.

Making a virtue of necessity, given the relative manpower on the big Lexington farms, Epicenter will have been allowed the freedom “to be a horse” as people like to say. At the same time, supervision at Westwind is so intimate that there will always have been a finger on the pulse of his development. They're raised outdoors through the winter, with run-in sheds and racks of farm-grown hay; and brought in a couple of times a day for handling and feeding. Then, during sales prep, attention is so literally hands-on that Harris reckons on losing 10lbs from May to September.

“There's just five of us, and we do pretty much everything ourselves,” Harris reflects. “From May on, they're led 30 minutes every day, groomed and bathed; we try to lead them to new places, get them used to different situations. Epicenter was real good that way, just real easy to get along with; never got excited or scared. We load them onto the trailer 20 or 30 times before we go to the sale, just to introduce them to new stuff, but nothing ever fazed him. He just had that personality, he was a really smart colt.

“I think one of the main things we have here is our land. It's really good limestone, really good crop soil, and it raises a good horse too. Ever since my grandfather started the farm, I think our horses have always outrun their pedigrees. We've never spent more than $130,000 on a mare, and try not to go over $30,000-$40,000 on a stud fee, because if you get a crooked foal we can't afford to take a hit any bigger than that.”

Sure enough, grandfather Bettersworth bred the Hall of Fame champion sprinter My Juliet (Gallant Romeo), winner of 24 races; Brent and wife Beth co-bred multiple Grade I winner Sweet Reason (Street Sense), who was raised on the farm; and recently Restrainedvengeance (Hold Me Back) became a millionaire when third in the GI Breeders' Cup Dirt Mile.

As it happens, the $130,000 mare mentioned by Harris is Silent Candy herself. A five-time winner who also made the frame over nine furlongs of grass at Grade III level, she was acquired out of the Summerfield consignment at the Keeneland November Sale of 2014.

“She wasn't a real big mare, but she was very well balanced,” Harris recalls. “We liked that she was by Candy Ride, and another of the bigger draws was that she was in foal to Scat Daddy. We'd been fans since he went to stud, bred to him just about every year until his fee got really high.”

The resulting colt didn't achieve a great deal on the track, however, nor the other five named foals preceding Epicenter.

“She's had some nice ones but just had some bad luck,” Harris argues. “There was a filly by Will Take Charge that was going to be really nice, she ran second both times at Churchill but then had a freakish training accident. But that's the way it goes. We thought Not This Time was a gorgeous horse when we went to look at him, and he was in our price range. Silent Candy is due to foal [to Outwork] about the middle of the month, and then she's booked back to Not This Time.”

Though the Taylor Made stallion is now at the ceiling of the usual budget, Epicenter has plainly made a reunion of his parents commercially imperative. Certainly his emergence will inspire many other small breeders, observing such timely reward for the Harris family's perseverance when the game was so nearly up.

“The years after my grandfather died, it was tough,” Harris admits. “Several times we were just about ready to do something else, and then we'd have one come along like this. Epicenter really got us over the hump, he pulled us out of debt, and we've had a couple of decent sale years since with the market getting better.”

And, while they may not be quite at the epicenter of the Bluegrass, things could be turned inside out come the first Saturday in May.

“Well, you know, if you raise horses in Kentucky that's your goal: at some point to have a horse run in the Derby,” Harris says. “We've had one run in the Preakness, and we've had one in the Belmont. But never in the Derby, so we're just keeping our fingers crossed that he stays healthy and gets there. It'll be a fun day, if he does.

“Raising these horses, they're almost like our children. We're around them every day, handle them every day. There's no days off, that's for sure. But then when they've gone through the ring, and we bring them back into the stall, you have to wish them well and say goodbye and it's on to the next one. It's definitely a lifestyle, a whole lot more than a job. But we know we're lucky. We all live here on the farm, and Thoroughbreds are about the most beautiful animals God made. It's a good life.”

This story was posted in Shared News and tagged Bettersworth Westwind Farms, Epicenter, Mike Harris, Not This Time, Westwind Farms.