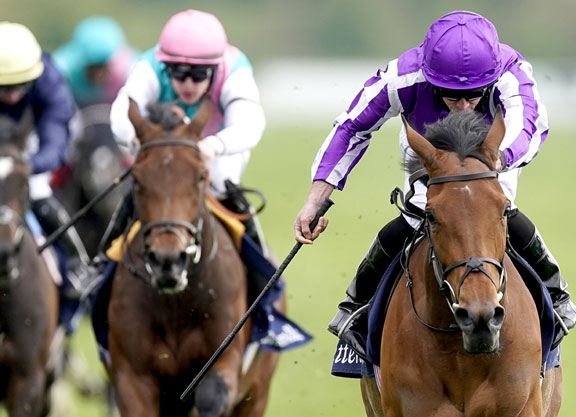 One of the prestige races missing from Aidan O'Brien's resume before Wednesday, York's G3 Tattersalls Musidora S. is now in the bag for the Ballydoyle master after Snowfall (Jpn) (Deep Impact {Jpn}) proved a rare outsider to win for the stable as she made all in the extended 10-furlong Oaks trial. Last seen finishing eighth when the subject of the notorious mix-up with stablemate Mother Earth (Ire) (Zoffany {Ire}) in Newmarket's G1 Fillies' Mile in October, the relative of Found (Ire) (Galileo {Ire}) was soon in front under Ryan Moore and in control as the favourite and second favourite Noon Star (Galileo {Ire}) and Teona (Ire) (Sea the Stars {Ire}) both over-raced. Stretching clear inside the final two furlongs, the 14-1 shot had 3 3/4 lengths to spare over the well-backed 11-10 market-leader Noon Star at the line, with Teona half a length behind in third. “Early on there wasn't really any speed and it wasn't the plan, we just ended up there,” Moore explained. “We've always thought an awful lot of her. It didn't happen for her last year, but stepping up in trip she's going to be a good filly. She relaxed nicely in front and she picked up and stayed on really well.”

A precious commodity as the first foal out of the G3 Give Thanks S. winner Best In the World (Ire), who like the aforementioned Found is a daughter of the G1 Matron S. and G1 Lockinge S. heroine Red Evie (Ire) (Intikhab), Snowfall was one of her stable's earlier representatives as the 2020 season eventually got going. Third behind Frenetic (Ire) (Kodiac {GB}) and Mother Earth over an extended five furlongs on debut at Navan, the bay was almost brought down when clipping heels in contention in a seven-furlong Curragh maiden later in June. Off the mark over the same course and distance in July, she was fourth in Leopardstown's G3 Silver Flash S. and fifth in The Curragh's G2 Debutante S. the following month before running ninth in the G1 Moyglare Stud S. in September prior to the Fillies' Mile.

Denting some lofty reputations here, Snowfall was also adding extra fuel to the already-raging fire surrounding her stablemate Santa Barbara (Ire) (Camelot {GB}) as the June 4 G1 Epsom Oaks approaches. Ballydoyle has exercised a stranglehold in two of the last three renewals of that Classic and it is not inconceivable that it could be that way again with very little left in the way of trials. “We always thought the world of her last year, but things just didn't work for her,” Aidan O'Brien said. “On pedigree, she was always going to be suited by a step up in trip and Ryan gave her a lovely ride. It's a beautiful pedigree and we always thought a race like that would suit. I would think the Oaks will be the plan, but we'll all have a chat.”

Best In the World also took the Listed Staffordstown Stud S. at two and was runner-up in the 10-furlong G2 Blandford S., having annexed the Give Thanks over a mile and a half. She is also a full-sibling of the G3 C L Weld Park S. scorer Magical Dream (Ire) and last year's G3 Flame of Tara S. winner Divinely (Ire) alongside the celebrated G1 Prix de l'Arc de Triomphe and GI Breeders' Cup Turf heroine Found, now the dam of last year's G2 Vintage S. scorer and GI Breeders' Cup Juvenile Turf runner-up Battleground (War Front). Best In the World's 2019 progeny is the colt Newfoundland (Ire) also by Deep Impact, while her yearling is a son of Dubawi (Ire).