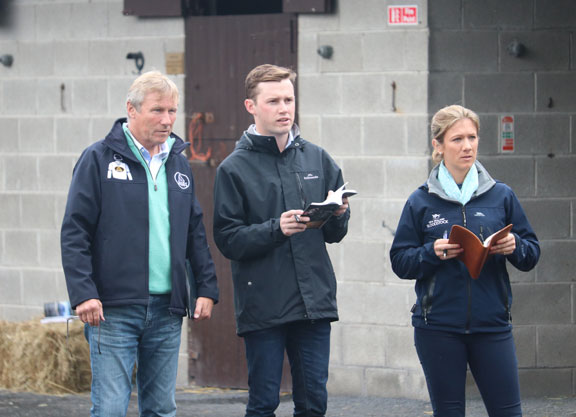 Last weekend, OTI Racing and partners’ Quick Thinker (Aus) (So You Think {NZ}) provided a timely advertisement for Inglis’s Easter Yearling Sale, where he had been bought 24 months’ previously for $100,000 by Hubie de Burgh, when winning the G1 Australian Derby on the first day of The Championships at Royal Randwick.

The Easter sale of 2018, when Quick Thinker went through the ring, looked much different than its latest renewal earlier this week, and the horse is perhaps appropriately named when considering the efforts that Inglis’s personnel-as well as those of every breeder, vendor, agent and buyer that supported the sale-undertook to make the world’s first major virtual yearling sale a success during the global COVID-19 pandemic.

Indeed, the two-day Easter sale-which was conducted with auctioneers in the rostrum and the horses displayed on video and bidders working on an online platform or over the phone-saw only marginal drops in average and median, a major victory for a completely overhauled and unprecedented sale format in the midst of a global health and economic crisis.

“I just take my hat off to Inglis,” de Burgh said. “They never gave up, they hung in there and they created a platform that gave the agents, breeders and buyers an opportunity to do business. To have seven yearlings make a million or more; unbelievable. And to sell 214 horses, and I’m sure a lot more that weren’t sold will be sold privately. It’s just incredible. The way they got together there the last six weeks, it was amazing. They wanted it to work, they willed it to work and it did work.”

Editor’s Note: 223 yearlings have been marked as sold through Thursday.

De Burgh, a frequent visitor to Australia and participant in the sales there, has been stationed at home in Ireland since returning from Magic Millions in January. He, like many others, kept tabs on the virtual sale-which had over 300 unique bidders–from afar.

“When you watch it on your iPad-you couldn’t see it because of the angle of the cameras-but you’d really swear the place was full of people,” he said. “It was amazing how they did it.

“The entire bloodstock world was watching that sale at Inglis to see what was going to happen, and I’d say a lot of people are breathing a sigh of relief. I’m sure up here [in Europe] the auction houses will be looking at different ways [of operating] in case something like this ever happens again, or if it continues later this year. They’ve seen it worked there. I had calls from America, France, England and Ireland afterwards saying, ‘wow, wasn’t that amazing?’ The world’s a very small place at the end of the day, and once the process works and people can see it works, other countries will follow. It was a great boost for the global world of the Thoroughbred industry.”

De Burgh praised Coolmore, which was both leading vendor and buyer, for being part of a great effort from many parties to boost confidence in the process.

“The Magnier family’s involvement was quite incredible,” he said. “I think it’s remarkable how they just got up there in times when everyone was in trouble and they went in and played a major part to show that you can still keep the industry going. I know the Magnier family are not there for charitable reasons, they bought some nice horses, but the fact they did so makes a statement. We all need confidence boosters, because there are so many ‘Doubting Thomases’ in everything. That confidence booster came from them, and all the agents and the likes of the Hong Kong Jockey Club that backed the sale. Little things like that just gave the whole industry a confidence boost. I’d love to see Tom [Magnier] and shake his hand for that, because I really do believe they must have sat down and thought about a policy, and I’m sure that’s one of the reasons they [supported the sale heavily].”

De Burgh said that while the private market has provided his business some security during the pandemic, bloodstock trade in Europe really depends on racing starting back up.

“As a business we do more private sales than at public sales,” he said. “And we have some very, very good clients. None of those have said they’re not buying for the year, but they have said, ‘when you find a bit of value we’re prepared to buy.’ I’d say what a lot of people are saying is, ‘if a horse has dropped off 30% or 40% of what its value was last year, we’ll definitely go in and buy the horse.’ I think a lot of people are waiting for value; it’s not a case of everybody deserting ship. Business will happen, but for it to really happen we have to start racing again.

“I suppose in the last month we’ve sold half a dozen horses. Four of those are subject to seeing them, but we can’t go see them until we’re finished the lockdown. The other two were at the very beginning and they were only bought because they were reasonably close by and I was able to go and see them. Now, it’s very, very hard to buy a horse because you’re locked down.”

De Burgh said the lockdown has allowed him to explore different angles of the business.

“It has really given us an opportunity to sit down and do so much more research on things you wouldn’t have time to do in a normal year if you were out looking at horses and traveling,” he said. “So in some ways it’s been very interesting.”

“We’re ok, we’re still going and the deals are happening, but I feel very sorry for the guys who have that one opportunity to sell when they sell at a sale, like the breeze-up guys,” de Burgh added. “We can sell all year, but the guys that are preparing to sell in one sale when they don’t have an online situation-here in Europe we’re way behind on that-that has to be very difficult for those guys. I feel very sorry for them and for the knock-on effect on the whole industry.”

The Chris Waller-trained Quick Thinker has no doubt been a boost to all involved.

“Quick Thinker was a late call-up at Easter by Terry Henderson of OTI,” de Burgh recalled. “Terry had won the New Zealand Derby with [co-trainers] Murray Baker and Andrew Forsman the year before [with Vin De Dance] and he said, ‘I want to get something to say thanks very much, so if you see a staying type of horse we’ve got about $100,000 to spend.’ With Will Johnson with me, we’d seen everything in the sale. We’d been on the Inglis tour around the Hunter Valley, so once we got the order it was very easy to narrow it down.”

Quick Thinker brought up a remarkable double for de Burgh and his former employee turned business partner Will Johnson. Just a month prior to the pair picking out Quick Thinker, Johnson had selected a colt by Declaration of War at the Magic Millions March Sale. Signed for at $65,000 by Sam Freedman/De Burgh Equine, the colt later named Warning (Aus) won the G1 Victoria Derby last November.

Of Quick Thinker, de Burgh said, “He’s a very nice colt with a lot of quality; he’s more of a European-type horse to look at. He has great balance to him, he’s a very athletic walker and that’s what got us to begin with. He was very light on his feet. It was quite interesting because his dam had won over five and seven furlongs so you’d think ‘my goodness, he probably isn’t going to be a 10-furlong horse.’ But he was by So You Think and the third dam produced a VRC Derby winner and a South Australian Oaks winner, so that’s where we were thinking he might stay 10 furlongs, and as it turns out he did.”

De Burgh said his long and successful partnership with Terry Henderson made the win extra special. While it was rare for de Burgh to receive an order for a Derby-type colt in Australia, he and Henderson have purchased together horses in Europe that have won or placed in 152 group or listed races in Australia.

“It was good for Terry,” de Burgh said. “I’ve been working with Terry for about 15 years sourcing stayers in Europe so it was nice to be able to repay him. He’s a great friend as well as a client and he’s been very loyal. I’m delighted for Terry because he works bloody hard, and he’s being rewarded for it.”