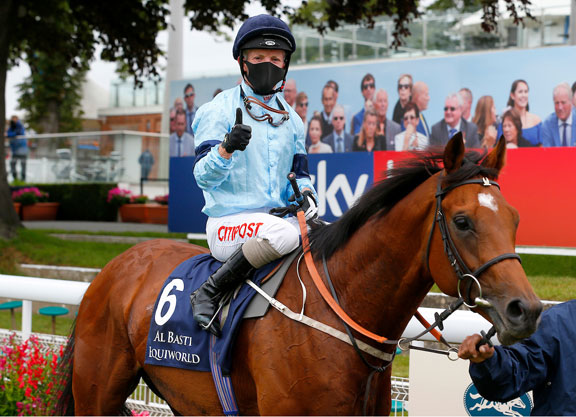 Completing a notable double on the York card for Mark Johnston and Franny Norton, Highclere Thoroughbred Racing's Thunderous (Ire) (Night of Thunder {Ire}) outstayed the Niarchos Family's TDN Rising Star Highest Ground (Ire) (Frankel {GB}) to land Thursday's G2 Al Basti Equiworld Dubai Dante S. Unbeaten at two and possibly in need of his comeback when runner-up in Newmarket's Listed Fairway S., the 13-2 shot tracked Ballydoyle's Cormorant (Ire) (Kingman {GB}) throughout the early stages but looked booked for second as Oisin Murphy sent Highest Ground to the front with two furlongs remaining. Sticking to his guns, the bay whose previous best had come in last year's Listed Washington Singer S. wore down the 8-11 favourite in the dying strides to prevail by a neck, with Juan Elcano (GB) (Frankel {GB}) two lengths further behind in third. “He was off the bridle, but he was behind the bridle a little bit at Newmarket as well. He had to dig in deep today, but he did,” Norton said. “I was quite confident and comfortable where I was. He loved that ground and I think there's more to come–I don't think he's quite there just yet.”

Following a brace of seven-furlong novice wins at Doncaster in June and Redcar the following month with success in Newbury's Listed Denford S., or Washington Singer, also over that trip in August, Thunderous then found his momentum stopped jarringly through injury. Nursed back for the Spring, he met with another derailing which meant that his return in the Fairway June 27 was a much-needed one. Second to the more streetwise Volkan Star (Ire) (Sea the Stars {Ire}) in that 10-furlong contest staged on good-to-firm ground, he had conditions more in his favour here but had the requisite class to prove. In getting to the hot favourite and much-vaunted Highest Ground, he was putting himself back in the picture as the major middle-distance all-aged contests loom.

“He's had his ups and downs and just as we were starting to dream of races like the Royal Lodge and the Vertem Futurity Trophy he had an injury after winning at Newbury,” Charlie Johnston explained. “He had another setback in March, although the consequences of that weren't quite as dramatic as there was no racing in the early part of the year. When we left Newbury last year, we felt he was a Derby horse and the way things have panned out, we've never had a clean run at that but he's a horse we've always thought a huge amount of and he's got a big future. He's very laid-back and we were quite rushed getting him to Newmarket. We knew running him there would give us the best chance of winning here today and that's how it's proved.”

“His attitude and racing style would suggest he could be a St Leger horse, but his pedigree wouldn't give you a lot of confidence for that sort of distance,” the trainer's son and assistant added. “It's hard to make plans this year. There is the [G1] Grand Prix de Paris [at ParisLongchamp Sept. 13]. These races still matter a huge amount and to win them both today still means a huge amount to the team.”

Oisin Murphy was at his usual self-critical best after getting run down late on the favourite. “I was a bit frustrated with myself as no-one wants to finish second, but Highest Ground is gorgeous, if still a bit immature physically and mentally,” he said. “He'd had only two starts before today, but I think he'll go to a high level. It's a shame he didn't get his head in front this afternoon. We went an even enough gallop and I just thought, on that ground, he got a bit tired late on. He hasn't had a hard race, I hope, and the Niarchos family have a lovely horse.”

Thunderous's prospects of staying more than a mile and a half are reasonable, being out of the useful Italian listed scorer Souviens Toi (GB) (Dalakhani {Ire}) who was also fourth in the G3 Pinnacle S. and G3 Lille Langtry S. A half-sister to the G2 Oaks d'Italia third Whippy Cream (Ire) (Dansili {GB}), she hails from the family of the German group 3 winner and G2 Al Maktoum Challenge Round 1 runner-up Empire Storm (Ger) (Storming Home {GB}). Her 2-year-old colt by Exceed and Excel (Aus) was bought by Stroud Coleman Bloodstock for 150,000gns at the Tattersalls October Yearling Sale Book 2 Sale, while she also has a filly foal by Frankel (GB).