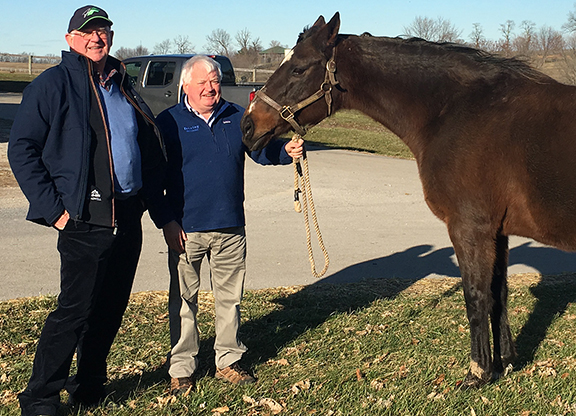 It didn't take long after the tragic news of Gerry Dilger's passing on Wednesday morning for his friends to decide upon the most fitting way to honor his memory: a continuing commitment to the education of young people in the Thoroughbred industry. Pat Costello said that discussions started at noon Thursday as the brainchild of Robbie Lyons and Lesley Campion in the Paramount Sales office and by 2 p.m., a Gofundme page was up and running.

By Friday afternoon, the Gerry Dilger Equine Scholarship Foundation had already raised over $100,000, with no signs of slowing.

“In keeping with Gerry's vision of helping young people in the industry, we felt it was a fitting tribute to establish equine scholarships in his name,” said Costello. “Every year, Gerry employed three to four young students and taught them and encouraged them like they were his own children. When they finished the term with him, they were well-rounded young horsemen and women and lifelong friends, with tremendous respect and love for Gerry. These scholarships will provide a financial contribution for students to assist them on their path into the horse industry and keep Gerry's work alive.”

Costello said that dozens of Dilger's friends participated in the meeting Thursday, and offered their help and support, including The Green Group, who will prepare and file the paperwork required to establish the charity's 501(c)3 status.

“We're in the baby steps of it,” said Costello, who said that the outpouring of support had been such that, “it might have to have a bigger vision than we initially thought.” The organizers initially envisioned an annual scholarship to the Irish National Stud as Gerry was a graduate of the world-famous course, but seeing the amount of funds being raised, it is possible that Dilger's memory can be honored with the establishment of a truly international equine educational fund. Dilger, who had a lifelong commitment to providing opportunity and a leg up to students who needed it, understood the importance of a well-educated Thoroughbred workforce, his friends say. He also derived a personal satisfaction from helping fellow Irishmen get established in America, and serving as a mentor. As such, a lasting legacy of educational assistance is appropriate, and a fitting way to honor him, the group said.

“We are overwhelmed with the generosity of all those who have donated and we are hugely grateful,” said Costello. “It is a testament to the life of Gerry Dilger and his reputation. His lifelong generosity is being deservedly reciprocated and we are proud to facilitate that. This foundation is in its infancy, and could go on to be something bigger.”

“We want to do the right thing by the foundation,” said Costello. “Erin (Dilger) and her daughter, Claire, are going to be on the board of directors. We are recruiting some top industry people to help with this, and we'll keep Gerry's name alive.

James Keogh also remembered his friend as someone passionate about education.

“We grew up two towns apart in Ireland, and when he was 14 and 15, he was a tremendous rider of show ponies and he was sought by many. He was a perfectionist even then, and rode all of the top show ponies all over County Clare and Limerick. He was the consummate horseman from day one.

“But It's very interesting because Gerry himself was a very mediocre student,” Keogh continued with a laugh, “and had very little time for it and quit school at 15. But he always had that passion for young people and showing them. He was very grateful for the opportunities he had received, and he wanted to provide those opportunities for others. He loved to see the people who he got to coach and mentor and see them go on to be a success.”

An emotional Keogh continued, “We were very, very fond of Gerry. The horsemanship was one side. But he was also an amazing father. I remember speaking to him one afternoon and talking to him about going to the Blue Grass. He said, 'Nope. Not this weekend. I'm off to Indianapolis.' His son was playing in a soccer tournament. And while he didn't ride any more, Gracie, is an accomplished rider, and he derived great pleasure from watching her show.”