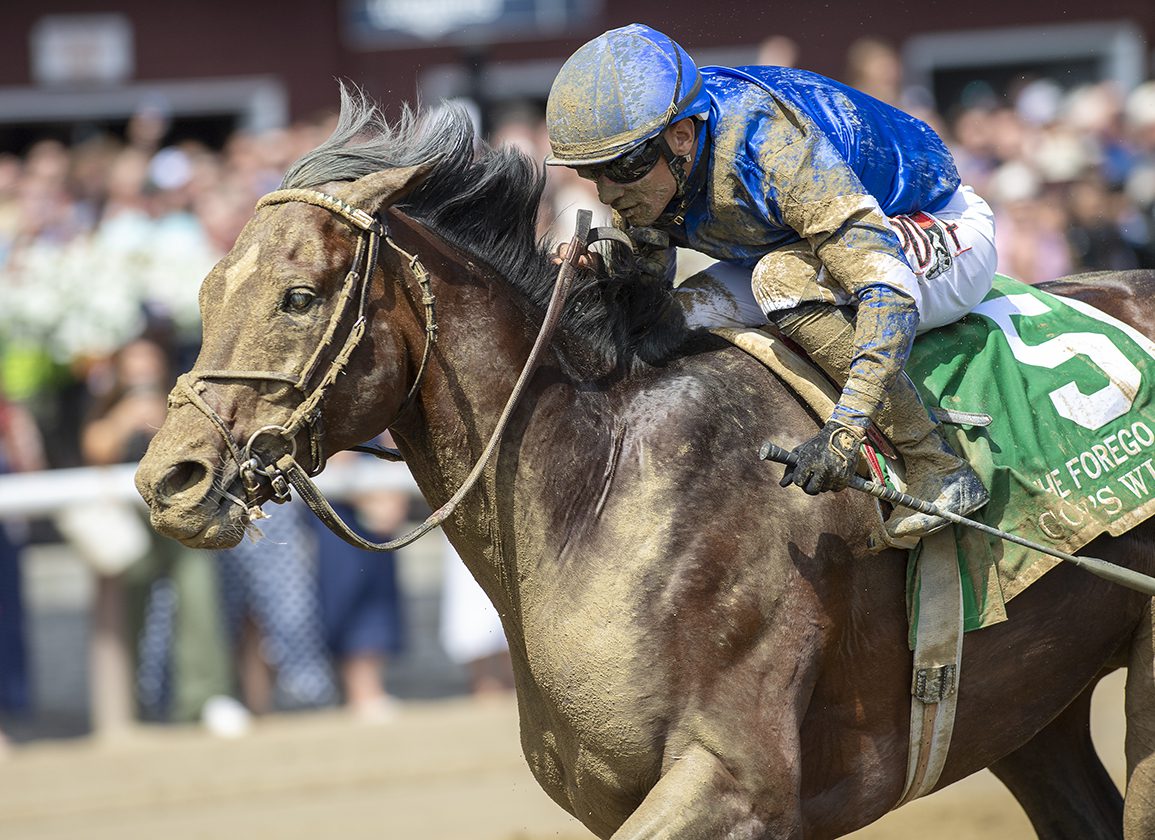 Previously unbeaten at Saratoga and for the season, champion Jackie's Warrior (Maclean's Music) became the latest victim of the “Graveyard of Champions” Saturday when run down late by the ever-improving Cody's Wish (Curlin).

The 1-9 favorite hustled up to dictate terms and was pressed by longshot Pipeline (Speightstown) through a :22.75 opening quarter and :45.10 half-mile while 8-1 shot Cody's Wish raced in a joint last. Jackie's Warrior turned for home in front with a stubborn Pipeline breathing down his neck and Cody's Wish winding up out in the center of the track. Jackie's Warrior shook loose as three quarters went up in 1:08.76 and appeared home free. However, Cody's Wish was just hitting his best stride and swept by the favorite just a few steps from the wire to spring the upset by 1 1/4 lengths. Pipeline held on for third.

“I really thought the style of this race would suit this horse. I was glad to see somebody going with [Jackie's Warrior], for sure,” said winning trainer Bill Mott, who also trained fourth-place finisher Baby Yoda (Prospective). “I didn't think it was going to be either of mine. I thought both of ours were going to settle back. I didn't know whether we were going to be laying second, third or fourth, and actually Cody's Wish was back a little further. I thought he'd be a little closer to the pace early, but as it turned out it was good that somebody entertained Jackie's Warrior a little bit. When he cut the corner at the three-eighths pole, I saw him moving. I know when he starts moving, he keeps moving.”

Graduating at fourth asking at Churchill in October, Cody's Wish followed suit with a pair of allowance wins beneath the Twin Spires in November. Missing by a neck in Tampa's GIII Challenger S. Mar. 12, the homebred romped in Belmont's GIII Westchester S. in the slop May 7, running a 104 Beyer Speed Figure. He entered this off a win in Churchill's Hanshin S. July 4.

Click here for more on the Forego winner and his namesake.

Cody's Wish is the 19th Grade I winner for his legendary sire Curlin. Sheikh Mohammed's operation purchased the winner's Grade I-winning dam Dance Card for $750,000 as a 2-year-old at the FTKFEB sale. All three of her foals to race are black-type runners with the other two being MGSP Endorsed (Medaglia d'Oro) and SP Bocephus (Medaglia d'Oro). Her recent produce includes a yearling colt by Into Mischief and a 2022 filly by Street Sense. The 13-year-old mare was bred back to Gun Runner.