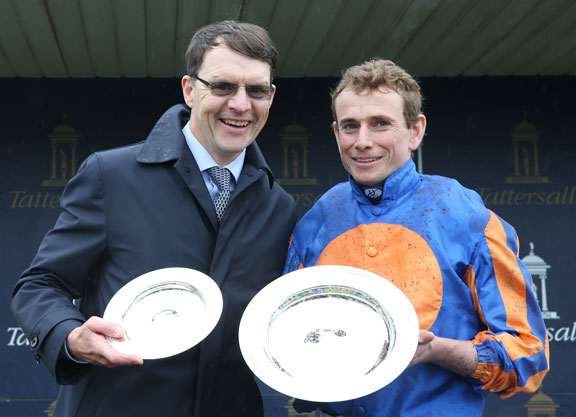 Finding the favourite for Saturday's G1 Investec Derby has been difficult so far, but it may be that 'TDN Rising Star' Cliffs of Moher (Ire) (Galileo {Ire}) proves an irresistible draw as he spearheads the ludicrously successful and omnipresent Ballydoyle challenge. While his prep in the Listed Dee S. at Chester is far from the most remarkable piece of form on show here, connections were clear beforehand that he would benefit greatly from the experience around the mentally testing Roodeye. On the face of it, a 1 1/2-length beating of Bay of Poets (Ire) (Lope de Vega {Ire}) in that May 12 10-furlong contest may not be good enough, but the indications from Rosegreen suggest he has taken strides towards his main goal, aka Tesio's notorious piece of wood. With two other main trial winners and six actors involved in the latest blue riband script in total, Aidan O'Brien must be the first port of call for handicappers bidding to unravel this quandary. “We were a little bit worried with him going to Chester, as he had a very soft run the first time and won very easily on his second run as a 2-year-old. We were just hoping that we'd be able to get a run into him and find that he could go to the Derby,” his trainer said. “He was a little bit slowly away and Ryan got him into a good position fairly quick. He was a little bit green on the bend and into the straight and picked up really well in the last half a furlong. He's a horse that always showed plenty of pace, so we weren't even sure about going up to a mile-and-a-half, but he galloped out well to the line at Chester.”

If Cliffs of Moher fails to live up to Ryan Moore's expectations, there is a more-than-adequate back-up team on hand, which features another Chester scorer in Venice Beach (Ire) (Galileo {Ire}). As a half-brother to the Arc and King George heroine Danedream (Ger) (Lomitas {GB}), he has all the credentials to play a major hand and it is probable that he will again prove better than stablemates Wings of Eagles (Fr) (Pour Moi {Ire}) and The Anvil (Ire) (Galileo {Ire}). Whether he can get ahead of the G3 Derrinstown Stud Derby Trial S. first and third Douglas Macarthur (Ire) (Galileo {Ire}) and Capri (Ire) (Galileo {Ire}) remains to be seen and it was significant that the latter was the one of the sextet to attract support this week. “The Derrinstown two, their preparations have gone very well,” O'Brien added. “They came forward from their first to their second run and we think, and hope, that they should come forward again. Douglas Macarthur is a horse we always thought would stay more than a mile-and-a-quarter and that is what he showed at Leopardstown when he came back on the line and put his head down in front. He will improve for going the mile-and-a-half. Capri has had two runs this year. He ran first time in the Ballysax and we were very happy with his run. Then he progressed nicely to his second run. Everything seems to be fine since with him. The three horses that ran in the Vase are solid mile-and-a-half horses. They will get the mile-and-a-half well and they might get further.”

While the British and Irish racegoers are accustomed to the numerical presence of Ballydoyle in the Classics, it has been a while since the Maktoum family have enjoyed the same, but they also have a squad of significance here. William Buick has picked the non-Godolphin colourbearer Permian (Ire) (Teofilo {Ire}), which is understandable given that he won what has always been considered the race's premier trial, the G2 Dante S. His 3/4-of-a-length defeat of 'TDN Rising Star' Benbatl (GB) (Dubawi {Ire}) in that May 18 York prep was another step forward for the colt who has endured a heavy campaign for a Derby contender, and trainer Mark Johnston is convinced that he is better than when touched off by Cracksman (GB) (Frankel {GB}) in the Apr. 26 Investec Derby Trial here.

“Everything has been very smooth and straightforward since the Dante. We haven't changed anything with him,” his trainer said. “It's obviously quite unusual for a Derby contender to have run so often in the run up to the race; he's had four races already this season. That might not be orthodox, but, in many ways, there's got to be a lot of advantages to that, particularly in a big-field Derby, as it is this year. It can be a rough race and it can be difficult and that might play into our hands. We're one of the most experienced horses in the race and he demonstrated in the Dante that when horses are struggling and not settling, he can just do his own thing and settle wherever the jockey wants him. We know he's got lots of speed to get a position and we're very, very confident that he'll stay the trip. If Cracksman is the one to beat, we've got an extremely good chance of beating him.”

It would be fitting if Saeed bin Suroor can finally provide a Derby winner in the royal blue silks and his trio include the May 13 Listed Lingfield Derby Trial winner Best Solution (Ire) (Kodiac {GB}), who like Permian is not short of racecourse conditioning as he makes his 10th appearance and has been to Turkey and Dubai; and 'TDN Rising Star' Dubai Thunder (GB) (Dubawi {Ire}). The latter booked a late ticket with a 10-length maiden win at Newbury on May 19 and Godolphin's Chief Executive and Racing Manager John Ferguson said he is excited by him. “The manner in which Dubai Thunder did it surprised me, but he has always shown he was a talented horse at home,” he said. “He is by Dubawi and comes from a really good family. He is a brother to Farhh, so he has got the pedigree that can get the job done. It is a big ask to come here on your second run. We did it with Lammtarra many years ago. It's a big ask from an experience point of view, but if Saeed thinks it's the right thing to do, who I am to tell him no? He knows more about the horse than I do. It's a great punt, but Sheikh Mohammed loves having horses in the Derby and he loves coming to Epsom.” Of the others, he added, “Benbatl is a horse that has been going so well. He was placed in a Craven and has progressed again to be second in a Dante. He's a horse that is progressing. Best Solution is a group winner as a 2-year-old, which is important. He has won a Lingfield Derby trial in devastating fashion and I think he will be in the shake-up.”

John Gosden also has four runners and aside from Cracksman he has a live one in Nizar Anwar's impressive Listed Cocked Hat S. scorer Khalidi (GB) (High Chaparral {Ire}). He also captured Newmarket's Listed Feilden S. over nine furlongs on Apr. 18 , where he was a neck in front of Salouen (Ire) (Canford Cliffs {Ire}). The latter was runner-up in the G1 Prix Jean-Luc Lagardere at Chantilly and third in the G1 Racing Post Trophy at Doncaster and is no back-number. “He has been very good since finishing second in the Feilden S. We were planning to run him in the Dante, but the ground went against him,” trainer Sylvester Kirk explained. “You have to come down the hill and stay in the Derby, everything has to come together on the day. It looks a very open race. I know it is always going to be difficult and he is a long shot, but he is in great form and we are looking forward to taking our chance.”