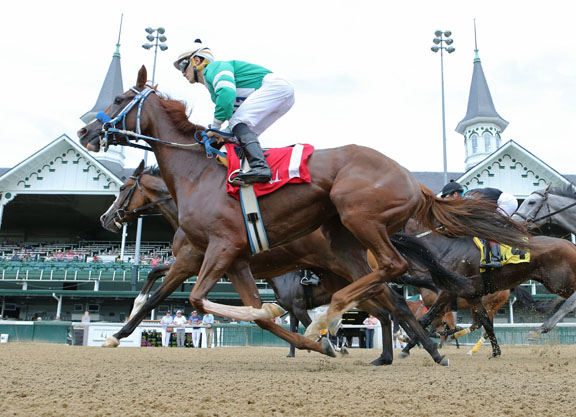 The new date for the GII Stephen Foster H. and the creation of a new mid-meet Stephen Foster Preview Night highlight a record 41-race, $14-million stakes schedule for the upcoming 38-day Spring Meet at Churchill Downs that runs Apr. 25-June 27.

The Stephen Foster, which will be contested closing day June 27, will also receive a $100,000 boost in purse to $700,000. The nine-furlong event anchors a seven-race stakes card-totaling $1.85 million in purses-includes the GII $300,000 Fleur de Lis S. and the GII Wise Dan S. and a pair of newly-created one-mile turf stakes; the War Chant S. and the Tepin S.

Additionally, a new Stephen Foster Preview Night, scheduled for May 30, features seven stakes worth a total of $975,000. The Preview Night is hosted in conjunction with Downs After Dark, presented by Budweiser. Highlighting the card is the new Blame S. at 1 1/8 miles, contested four weeks after the GIII Alysheba S. on the Kentucky Oaks undercard.

The 2020 season, which will see seven newly-created stakes races, while 13 stakes will received purse hikes that range from $25,000 to $100,000. Over $32 million in total prize money is expected to be offered during this year's Spring Meet.

“We've meaningfully raised purses in the last year and the results were an extremely competitive racing product with more entries and high-quality horses that appealed to bettors nationwide,” said Churchill Downs Racetrack President Kevin Flanery. “We believe this exciting new 'big event' series created by our racing team will help keep the momentum moving forward and be embraced around the country by both horsemen and horseplayers alike.”

The first condition book of scheduled races is expected to be published in early March. Stall applications are due by Friday, Mar. 6.