Charlton Stars Wait in the Wings 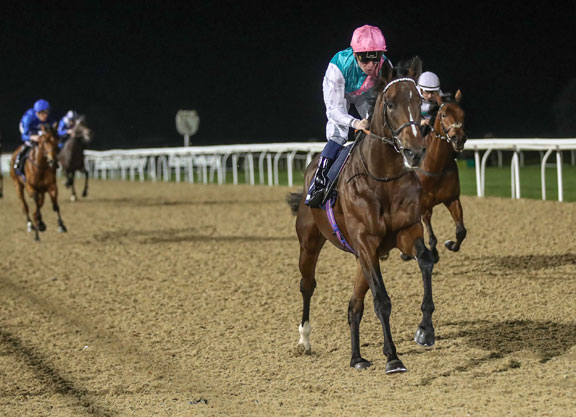 Like everybody else, Roger Charlton is having to bide his time at present but is able to provide upbeat bulletins on two of his stable's chief hopes for 2020 in TDN Rising Stars Quadrilateral (GB) (Frankel {GB}) and Headman (GB) (Kingman {GB}). The former, who carried an unbeaten record into Newmarket's G1 Fillies' Mile in October and emerged with it intact despite leaving it late, is being geared towards the G1 1000 Guineas which is provisionally scheduled for June. Headman, who took the G2 Prix Eugene Adam and G2 Prix Guillaume d'Ornano last term, is also running smoothly on the track towards a comeback when racing is resumed.

Of Quadrilateral, he said, “She seems to have had a good winter. She should progress and looks well, but she's not been asked a question yet and is just ticking over. I had in mind that she would go straight to the Guineas anyway, but she might have had a racecourse gallop during the Craven meeting which she obviously can't now. We have to prepare her at home, but I wouldn't want her peaking for the Guineas anyway.”

As a daughter of Frankel out of a half to Three Valleys (Diesis {GB}) from the family of Hasili (Ire) (Kahyasi {Ire}), Quadrilateral has a blend of miling speed and stamina and her trainer admits to being in the dark about her distance requirements at present.

“I think, going back into Frankel's pedigree, with the exception of Kind (Ire) (Danehill {GB}), Danehill and Danzig there is stamina in the family and his horses do seem to stay well,” he said. “She demonstrated that she needs every yard of a mile at Newmarket and it's a possibility that she'll get 10 furlongs, but whether she'll get a mile and a half I don't know. I don't see her as a staying filly, but it will be a bonus if she does stay that far.”

Headman was being aimed at the initial intermediate Group 1 contests that could be in danger of being lost due to the delay.

“He came through the winter well and is a big strong horse who is nearly seventeen hands high, so he should have improved,” Charlton commented. “The original plan was to head back to France for their nine or 10-furlong Group 1s, the Ganay or d'Ispahan, or the [G1] Tattersalls Gold Cup, but obviously the plans are up in the air. He does need plenty of work and he's been kept on the go during the winter, but we've backed off him recently.”

Also at Beckhampton is the promising Pocket Square (GB) (Night of Thunder {Ire}), another Juddmonte homebred whose stock raised considerably after winning the G3 Prix des Reservoirs in October. She had endured a setback in her schedule in recent months, but is on the way back now according to her handler.

“She had less of a good winter, as she had one or two minor issues and so doesn't look quite so well as the others,” he explained. “She had an infected sinus and a tooth needed removing, but her problems are behind her now and time is on her side. With each race last year she improved and showed she handles extremes of ground. She stayed on in tough conditions at Deauville and is physically more of a staying filly than Quadrilateral. There are mixed messages from the pedigree, but she looks like one who could start in an Oaks trial.”