Home » Archive » Shared News » Building a 100-Horse Stable, One Micro-Share at a Time

Building a 100-Horse Stable, One Micro-Share at a Time 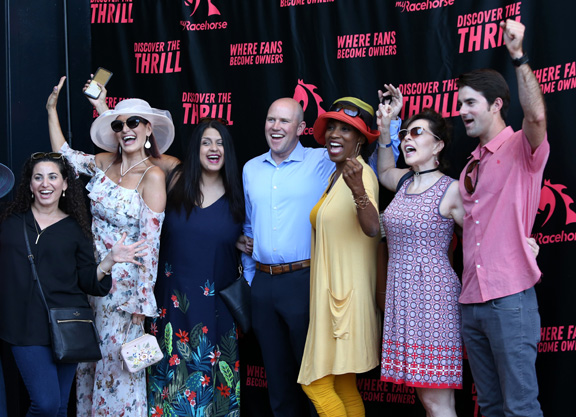 Michael Behrens has very suddenly–and a bit unexpectedly, he admits–found himself in a position to be buying a significant amount of bloodstock.

Behrens is the co-founder of MyRacehorse, the micro-shares syndicate that acquires partnership interests in racehorses then slices those assets into far smaller investment opportunities that generally cost below $400 per share and usually equate to one-tenth of one percent of ownership in a race-ready horse, all training costs included.

The firm barely existed a year ago and only bought its first 2-year-old at auction this March. Yet Behrens told TDN a recent strategy switch from building a crowdfunded stable with mid-caliber stock to assembling a more elite equine portfolio with six-figure-valued horses has been so well received by individual investors that MyRacehorse now projects to triple its current roster of 35 micro-partnerships by acquiring interests in 100 total horses over the next year.

“It took awhile to catch on,” Behrens said. “I think people were being cautiously optimistic to see if we could deliver what we promised on the micro-share platform. When we first started, we were buying horses valued on average around $30,000. Then halfway through our pilot, we started increasing it to $100,000, and we got more and more positive feedback. As we kept increasing quality, we saw that our growth and quality were perfectly correlated.

“Consumers said that it was exciting to be part of horses for such a low level. But we heard over and over the idea of potentially having the 'Big Horse' is what they really wanted to be a part of,” Behrens continued. “And the fact that we are able to break these types of horse investments down into micro-percentages, it gives people access to what was once inaccessible.

“So we said, 'Let's just go big. Let's really get into the top end and see if that continues.”

At this point in MyRacehorse's career arc, “top end” equates to the 2-year-old Wayne O (Into Mischief), a $750,000 FTSAUG purchase that the syndicate bought a 60% interest in from Spendthrift Farm earlier this summer. The colt, a half-brother to GISW Restless Rider (Distorted Humor), debuts in a Saturday maiden special weight at Saratoga for trainer Steve Asmussen.

Here's an example of the demand that is driving MyRacehorse toward more expensive bloodstock: On July 25, when shares of Wayne O first became available for purchase on the MyRacehorse app ($95 for a hundredth of one percent of ownership, which includes a separate $600 per-share bonus if the horse ever wins a Grade I), individual investors purchased $103,000 worth of Wayne O shares in the first 30 minutes. The new investor limit was reached within four days, selling out all of the colt's micro-shares.

“Even a couple of weeks ago, I had no clue we were going to start getting involved with $700,000 and $800,000 purchases like Wayne O and the next deal I'm working on,” Behrens said. “But we're now intending to spend about 75% of our budget on higher-end 2-year-olds.”

To get a detailed sense of how MyRacehorse works, check out TDN's original article on the company from June 2018. There have been a few minor pricing and protocol tweaks, but those changes have been updated on the company's FAQ page.

Behrens (a marketing executive who's developed direct-to-consumer strategies for both start-ups and Fortune 500 companies) and co-founder David Kandasamy (a technology specialist who worked as a product development executive at Netscape, AOL, and Yahoo) spent the year before the firm's launch grinding away at legal due diligence to make sure the offerings on MyRacehorse were in compliance with securities laws.

After operating for the first year as a pilot program in which only California residents could purchase micro-shares, on July 14 MyRacehorse received Securities and Exchange Commission permission to begin accepting investments from 43 states (Texas, Nevada, Arizona, Alabama, Nebraska, Florida and Washington are the holdouts, but the firm expects several of those will be available soon).

“A few weeks ago we exited being available in California only, and this past Saturday alone we had 100 new people become owners in one day,” Behrens said. “Business has just been crazy-phenomenal in terms of word of mouth.

“As new owners enjoy the experience, they're sharing it with others,” Behrens continued. “How fast people are adopting the micro-shares platform is amazing. It doesn't take a lot of people. It's the power of the crowd. People are starting to take notice that we have a lot of purchasing power because we bring people together to do this.”

Behrens said the decision to upgrade horseflesh was overwhelmingly based on customer feedback.

“What we heard [from micro-investors] is we want 2-year-olds and we want the opportunity to participate in big races,” Behrens said. “So we started with a modest budget of like a couple hundred grand, and OBS March was the first time we went to a sale and started looking for partners. We picked up a Jimmy Creed filly that we liked for $65,000 in partnership with Cardinal Hill Racing. It sold phenomenally [on the micro-shares platform]. So we went back in April.”

At OBSAPR, MyRacehorse bought interests in three more juveniles, partnering separately with owners Joey Platts and Slam Dunk Racing to combine for $360,000 worth of purchases. At OBSJUN the firm partnered with Winning Move Stable for another $100,000 colt.

Around the same time, MyRacehorse also started scouting for in-training graded stakes prospects. After Street Band (Istan) won the GII Fair Grounds Oaks, Behrens landed a piece of her for “a hefty valuation.” She subsequently ran sixth in the GI Kentucky Oaks, but became the syndicate's first graded stakes winner on July 13 when she scored in the GIII Indiana Oaks.

Simultaneously, Behrens began negotiating to acquire partnership interests in two juveniles Spendthrift bought as yearlings. One was Wayne O. The other, Tizamagician (Tiznow), is a $150,000 FTSAUG colt who ran second in his July 27 Del Mar debut. Behrens said 140 of the syndicate's micro-owners showed up to cheer him on.

“Our trainer, Dick Mandella, told [Spendthrift owner] B. Wayne Hughes, 'I can't believe I got a standing ovation for running second,'” Behrens said. “Wayne actually came out to watch the race with us, and customers wanted to meet him to thank him for the opportunity to partner on a really good horse. It was a special day.”

Right now there are five open micro-partnership opportunities available on MyRacehorse (30 others are sold out). All are 2-year-olds valued between $180 and $320 per one-tenth of one percent share.

“When [potential partners] started seeing us on tickets at the OBS sale, people started calling us,” Behrens said. “So yeah, we're buying aggressive. The idea of being a major player in buying graded stakes-quality horses of racing age, buying into a percentage of horses that were high-priced yearlings, and going to the 2-year-old sales and hitting the hammer more aggressively, that is where our focus is going to be, and that's absolutely what you'll see from us going forward.”

Behrens said that even though eventually acquiring horses as yearlings might have some appeal, the firm isn't quite prepared to invest in horses that are a year away from being race-ready.

“The yearling sales, we are just not ready for yet,” Behrens said. “But we are starting to consider that because many of our customers understand there's the possibility to do a little bit better on ROI if we acquire horses earlier, especially if we're open to [pinhooking] them. But that's just a little bit premature for us right now. We'd like to focus on getting horses that are closer to racing, and get a few more trips to the winner's circle under our belt.”