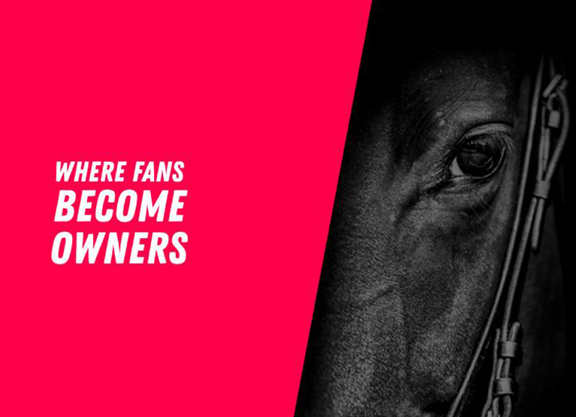 MyRacehorse's branding emphasizes its availability to everyday fans of the game.

A California-based start-up company is off and running with a new twist on the growing racehorse partnership trend. Shares of in-training Thoroughbreds will be offered to the public in “micro” increments for as little as $100, and the entrepreneurs of MyRacehorse envision that eventually, participants in their online investment network will be able to trade horse shares just like buying and selling securities in a stock market.

Co-founders Michael Behrens and David Kandasamy have already done a year's worth of pre-launch diligence to make sure the offerings on MyRacehorse are in compliance with securities laws, laying the groundwork for a future expansion into trading when horse inventory and investor interest grow to the point where the marketplace becomes robust enough to facilitate share-swapping.

What's different from other partnership ventures is that MyRacehorse acquires minority stakes in individual Thoroughbreds (say between 5% and 30%), then forms an individual “company” around that purchase and offers micro-shares of that investment to the general public.

The amount that the micro-shares sell for is based on the valuation of the horse plus several prepaid fees, and that sum is then divided into proportional allotments that entitle a prospective buyer to anywhere from .1% to 1% of a stake in the horse, including future purse earnings or even a pro-rated portion of a sale price if the horse gets claimed or sold.

“What you actually are buying is a stock into a company that owns a single asset, which is a minority stake in a racehorse,” Behrens told TDN.

Behrens acknowledges that the allure of MyRacehorse for many micro-owners won't be the iffy prospect of turning a profit on the deal. Rather, he explained, the company is looking to tap into the burgeoning “experiential investment” trend, which in marketing-speak translates to the growing tendency for 20-to-40-year-olds to spend disposable income on meaningful experiences rather than consumer goods and merchandise.

To that end, MyRacehorse aims to sweeten the deal for newcomers to the sport or casual racetrack attendees: Micro-owners will receive customized updates about their horses and invitations to owners-only events, backstretch tours to meet their horse, and race-day parties at the track.

“We want to build a global household name brand that makes horse ownership something that is not just for people who go to the races, but those who seek experiential entertainment,” Behrens said. “If we take a step back and look at the macro way things are going, the younger demographic is definitely shifting their money to experiential investments. They enjoy new things and just being part of different, new experiences, and we think MyRacehorse aligns perfectly with that.”

Considering that the racing industry has displayed an intense yearning to cozy up to the coveted millennial demographic, MyRacehorse could, in theory, end up doing a lot of the sport's heavy lifting, marketing-wise, if the fun-driven involvement aspect of the platform takes off.

How existing owners can participate

Behrens (a marketing executive who has developed direct-to-consumer strategies for both start-ups and Fortune 500 companies) and Kandasamy (a technology specialist who has worked as a product development executive at Netscape, AOL, and Yahoo) have indicated that they want their fledgling firm to wade into the marketplace gradually in an effort to have a smooth launch.

Right now, MyRacehorse has six California-based horse micro-partnerships on offer and investing for the time being is limited to California residents only. Behrens said he expects the company will roll out horse offerings in other states by the end of this year.

“Once we go national, obviously we'll have to scale up our inventory accordingly, because we'll want to make sure we have horses that are targeting local markets,” Behrens said.

The company is actively seeking existing Thoroughbred owners who want to participate by selling minority stakes in their horses, and the best way for those owners to get involved is by sending an email to [email protected] indicating interest.

If an owner wants to sell to MyRacehorse, it discloses what percentage of the horse it wants to offer and what the valuation will be. MyRacehorse does its own financial diligence to ensure that the valuation is realistic, and requires a health check by a veterinarian to rule out illness or injury prior to listing the horse on its platform.

Once the horse passes the vet check, the two parties enter a contract for the horse to be listed on the platform. This agreement stipulates a time window, perhaps 10 to 14 days, for MyRacehorse to sell all of its micro-shares to the public.

“As soon as we close the offer [by selling the microshare allotment], the majority partners get the check,” Behrens explained. “They have liquidity, and can reinvest that money as they see fit.”

If the micro-shares don't sell out in the time specified, the deal is off for all parties.

Any California resident over 18 can currently buy up to $2,500 in MyRacehorse micro-shares. The business is regulated by the state's Department of Business Oversight.

The listed share price for each horse comes with two surcharges: A 15% fee that goes to the managing partners (this is how MyRacehorse makes money as a business), and a pre-paid training fee that gets escrowed to cover the minority partnership's share of the bills. Dividends such as purse winnings above and beyond expenses, should there be any, will be paid to shareholders through the app.

While micro-owners will be involved at the meet-and-greet participation level, they should not expect to have a say in decisions that affect when, where, and how often the horse races.

“We'll be holding minority stakes in these horses, so obviously we're bestowing the responsibility to care for the horse with the [majority] ownership groups that we're part of,” Behrens said.

As partnerships at all levels of racing evolve, one difficulty has been percolating beneath the surface: As more and more people get in on fractional ownerships, their demands are exponentially increasing.

In that vein, Behrens was asked how MyRacehorse aspires to overcome being overrun with requests from micro-owners–from backstretch access to seating to face-time with the horse–once the platform is fully operational nationwide. Could his firm end up facing the equivalent of penny stockholders making outrageous demands at shareholder meetings?

“That's a good question, and that's been the one thing that savvy people in the industry have highlighted to us that would be our biggest challenge,” Behrens said. “Technology can really help to overcome those challenges. We're not naive enough to think that we won't encounter some, but our goal is to build a digital platform that solves a lot of these challenges.”

The scalable delivery of content and updates is one way Behrens said that difficulty could be eased. He also said the firm plans to take a page from the playbook of racing clubs in the United Kingdom, which he visited in preparation for MyRacehorse's launch. A lottery for prime perks on raceday is one concept he floated as MyRacehorse attempts to evolve into a wide-ranging trading marketplace.

“That's the whole goal of doing this with the backbone of being a regulated security,” Behrens said. “Our vision is to have real-time liquidity for the members. Let's say you are a micro-owner of a horse who just won impressively–all of a sudden you can see bid and ask offers for that asset on an exchange. We're already working on that, but it's going to take some work around the structure and the broker/dealer type of regulations and an improved tech stack. But absolutely, that's where we'd like to be eventually.”