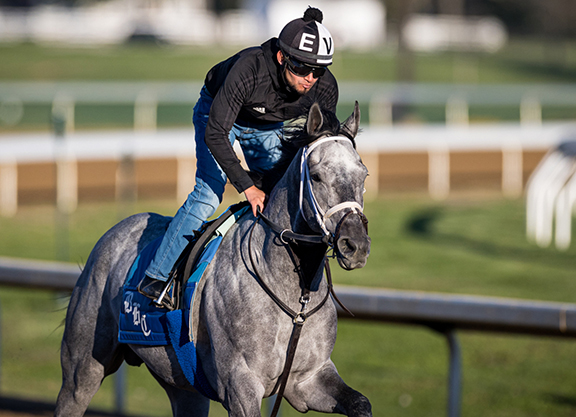 Essential Quality back on his home turf at Keeneland this week. | EquiSport Photos

'TDN Rising Star' Essential Quality (Tapit) looks to maintain a spotless record as he stretches out to nine furlongs for the first time while facing a field of nine in this Saturday's GII Toyota Blue Grass S. at Keeneland.

If this 3-5 morning line favorite were to score a win this weekend, he would, by most accounts, be considered a top choice heading into the GI Kentucky Derby as an undefeated dual Grade I winner. And yet, history would still be working against the Godolphin homebred come the first Saturday in May.

It has been 30 years since the Strike the Gold won the Blue Grass and went on to win the Kentucky Derby and, in the first 36 editions of the GI Breeders' Cup Juvenile, only Street Sense and Nyquist have later taken the first leg of the Triple Crown.

Do these irrefutable stats concern the colt's trainer?

“Well I mean it crosses your mind, but there's nothing you can do about it,” Brad Cox said. “You just train your horse as well as you can and the rest takes care of itself. It has nothing to do with the way I train him, so it really doesn't bother me at all.”

Before Cox and Essential Quality have to face up to both the Blue Grass and Juvenile jinx, they must first get to the Keeneland winner's circle for a third time.

'EQ' shipped in to Keeneland from Fair Grounds on Monday morning and galloped an easy mile-and-a-quarter the next day with his Godolphin connections looking on eagerly.

“It's just routine gallops from here to race day,” Cox reported earlier this week. “We'll probably train race day as well; it's kind of our routine with him. We feel like we're in a really good spot with him right now. He's a smart horse. He knows what's going on and he knows what he's about to do this weekend.”

Coming off a 4 1/4-length win Feb. 27 in the GIII Southwest S. over a sloppy Oaklawn surface, Essential Quality returns to the track where he put in his first recorded works last summer as a juvenile before taking the GI Claiborne Breeders' Futurity and GI TVG Breeders' Cup Juvenile at the same oval.

“When we took him in from Niall Brennan last summer, this is where he was shipped to so he got a lot of his prep work done as a 2-year-old here,” Cox noted.

The Eclipse-winning conditioner said that a start in the Blue Grass has been penciled in since the start of the year.

“We talked it over with our team and Jimmy [Bell, Godolphin], and we thought the Southwest, with the distance, would be a great comeback race being at a mile and sixteenth, as opposed to the GII Risen Star at a mile and an eighth. Then we made the decision on the Blue Grass. We thought this would be the spot that is not necessarily the easiest, but the one that made the most sense at a mile and an eighth. Then hopefully that third race off the layoff is his big race in the Kentucky Derby.”

On paper, Essential Quality's top competition looks to be Klaravich Stables' Highly Motivated. The son of Into Mischief is the only other sophomore in the field to surpass a 90 Beyer Speed Figure this year in the GIII Gotham S. Breaking his maiden at Belmont last September over eventual GI Curlin Florida Derby winner Known Agenda (Curlin), the Chad Brown trainee next established a new track record at Keeneland on Breeders' Cup weekend in the Nyquist S., drawing away to win the six-furlong race by 4 1/4 lengths. Going off as the favorite in the one-mile GIII Gotham S. in his lone sophomore start, he bobbled at the break and, after being forced four wide in the upper stretch, couldn't get up for better than third.

Robertino Diodoro pupil Keepmeinmind (Laoban) will face Essential Quality for a third time this weekend. The bay colt had to settle for second to the eventual champion in the Breeders' Futurity last fall and then was two lengths behind the same rival to finish third in the Juvenile. He did give a strong performance to wrap up his juvenile season with a win in the mile-and-a-sixteenth GII Kentucky Jockey Club S., but lost by eight lengths to 'TDN Rising Star' Concert Tour (Street Sense) in the GII Rebel S. on Mar. 13.

One wild card in the field could be Team Valor's Untreated (Nyquist). Finishing a lackluster sixth to next-out GIII Sam F. Davis winner Candy Man Rocket (Candy Ride {Arg}) in his debut in January for Chad Brown, the colt brought $300,000 days later at the Keeneland January Sale as part of the Paul Pompa dispersal. In his first start under Todd Pletcher against fellow maidens in his initial two-turn try at Tampa Bay Downs on Mar. 6, he advanced from the back of the pack to win by 8 3/4 lengths. The colt will make his first start without Lasix on Saturday.

A noticeable lack of speed in the nine-horse field could make for a different game plan for usual stalker Essential Quality as he departs from the fourth position, but Cox remains confident in the Derby hopeful and his affinity for the Central Kentucky track.

“He's had a lot of success here at Keeneland,” he said. “He loves it here and he's won two Grade I races here.”

As a Louisville native, Cox spoke on what a first win in the Blue Grass would mean for him and his team.