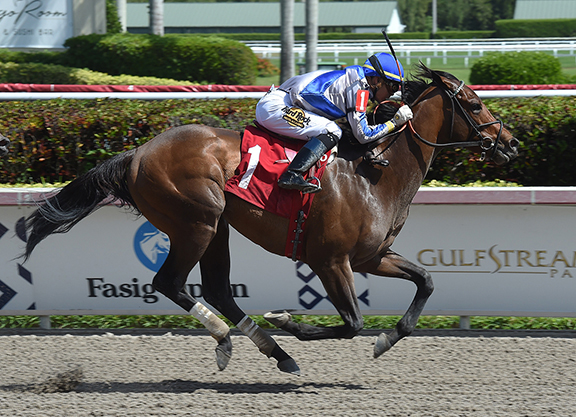 2nd-Gulfstream, $44,060, Alw (NW1X)/Opt. Clm ($75,000), 3-1, 3yo, 6f, 1:10.35, ft.
MUCHO (c, 3, Blame–Extent, by Pulpit) had to work a bit more for it than his 1-2 odds suggested he might have needed to, but the 'TDN Rising Star' kicked off his sophomore season on a winning note Friday at Gulfstream. Second on debut at Belmont last June, the homebred aired by 9 3/4 lengths in fast time to don cap and gown at Saratoga in August. He'd last been seen finishing a close second to Mind Control (Stay Thirsty) as the favorite in the Spa's Sept. 3 GI Hopeful S., but exited that event with an ankle issue. Mucho had fired three straight bullet breezes at trainer Bill Mott's Payson Park base for this, but broke a half-step slow from the rail and was briefly shuffled back before pilot Jose Ortiz pushed him through to sit third. Impressive debut winner Lutsky (Yes It's True) showed the way with Releasethethunder (More Than Ready) in hot pursuit, but by midway on the turn Mucho had caught up to that pair while three deep. They hit the quarter pole in :45.53, and Mucho began to inch away from his rivals in the lane, ultimately crossing the wire 1 1/4 lengths to the good of Releasethethunder. Lutsky held on for third. “I thought maybe he'd be good enough to win,” Mott said. “It looked like maybe he got a little tired there at the end; he's been off six months. Jose said they made a pretty long run from the three-eighths pole home. They were moving right along. It was a pretty good race, I'd say.” As for what could be next, the conditioner said, “I think we need to sit down with the powers that be and just figure out if we want to stretch out next time or what we want to do, distance-wise. I think that's the main thing we've got to talk about. I'm sure we will [stretch him out] at some point, whether it's next time or not. We've got to start somewhere.”Mucho is a half to fellow Mott trainee Size (First Samurai), GSW, $212,453, the 2-year-old colt Extreme (Speightstown); and a yearling colt by Curlin. His dam, who hails from deep female family that includes the likes of Nureyev, Archipenko and Mucho's sire Blame himself, was barren to Ghostzapper last breeding season. Lifetime Record: GISP, 4-2-2-0, $158,150. Click for the Equibase.com chart or VIDEO, sponsored by Fasig-Tipton.
O/B-Claiborne Farm & Adele B. Dilschneider (KY); T-William I. Mott.