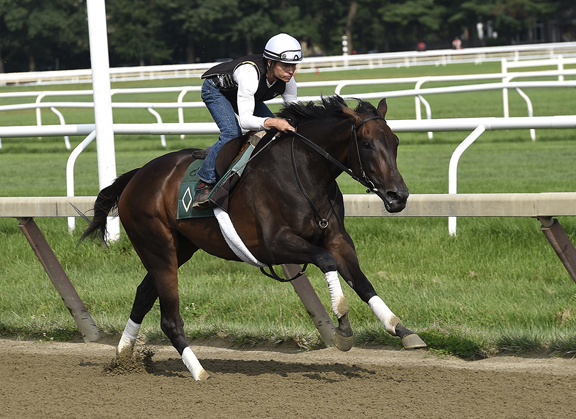 A pair of sidelined 'TDN Rising Stars' from Hall of Famer Bill Mott's barn are beginning to gear up at Payson Park for 2019.

Two-time Grade I heroine Elate (Medaglia d'Oro), off since finishing a painful second to Abel Tasman (Quality Road) with a career-best 105 Beyer Speed Figure in a roughly run renewal of the GI Personal Ensign S. at Saratoga Aug. 25, will return for a 5-year-old campaign.

The Claiborne Farm and Adele B. Dilschneider homebred faced the starter only one other time in 2018, capturing the 1 1/4-mile GII Delaware H. in dominating fashion in July. Forced to miss the GI Breeders' Cup Distaff after popping a splint in the Personal Ensign, Elate will likely target the GI Apple Blossom S. at Oaklawn Park Apr. 14, per Claiborne President Walker Hancock.

“We always had hoped on running her through her 5-year-old year, and since she only ran twice as a 4-year-old, it became an easy decision to keep her in training this year,” Hancock said.

“We are very excited to see her run in 2019. She improved a lot from three and four, and if she improves from four to five just a little bit, she will be a strong contender once again in the Distaff division.”

Fellow Claiborne and Dilschneider product Mucho (Blame), a good second as the even-money favorite in the seven-furlong GI Hopeful S. at Saratoga Sept. 3, could return to action versus allowance company for his sophomore debut in late February.

The bay earned his 'Rising Star' badge with a jaw-dropping 9 3/4-length maiden win under wraps at second asking at the Spa Aug. 4. He surged late to fall just 3/4 of a length short of Mind Control (Stay Thirsty) after bobbling at the start and making a menacing three-wide move on the far turn in the Hopeful.

“Mucho actually came out of the Hopeful with an ankle issue,” Hancock said. “He was pretty sore the next day, but thankfully no surgery was required–just a little time off. He went to Fair Hill and Bruce Jackson rehabbed him there. He resumed training at Payson the first of November.”

Could Mucho be headed down the Derby trail next spring?

“Not sure about the Derby trail–we will let him tell us how far he wants to run and certainly will not push him in that direction,” Hancock said. “Thankfully, the Woody Stephens is now a Grade I in early June, so there is nice opportunity for colts to point towards that race if they don't want to route.”