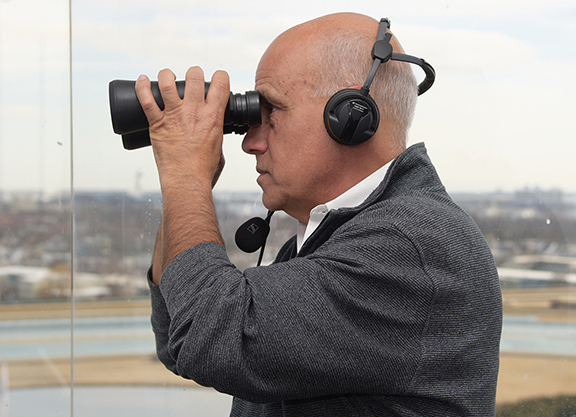 ELMONT, NY – After winning a contest in the New York Daily News back in 1979, John Imbriale got his first taste of the announcer's booth and press office at the New York Racing Association, and has been part of the fabric at Aqueduct, Belmont and Saratoga ever since.

A jack of all trades, Imbriale served as a backup to the legendary racecaller Tom Durkin beginning in 1990 and has held several behind-the-scenes roles with NYRA TV throughout the years as well.

Appointed to the position of head announcer in late January, the affable native of Queens, New York will be behind the binoculars as they line up for Saturday's 152nd renewal of the GI Belmont S.

“November of '79 I started, and it's been a good run and a good ride,” Imbriale said. “I got this opportunity and I hope to make the best of it.”

This year's Belmont, now the first leg of the reshuffled Triple Crown, has been shortened to 1 1/8 miles and will be contested spectator-free due to the coronavirus pandemic.

“Everybody knows it's under different circumstances,” Imbriale said before adding with a laugh, “I come along, they change the distance, which order the Triple Crown is run in, no fans, etc. But you have to deal with the hand that you're dealt. It's still obviously very exciting and thrilling to be able do it on Saturday.”

TDN's Senior Editor Steve Sherack caught up with Johnny I for a Q&A session as the big day approaches.

Q: New York sports is back and beautiful Belmont Park is back! Those were your words as you welcomed back not just racing in New York, but all of New York Sports, when Belmont re-opened for business June 3. This has just been such a surreal time for everyone throughout the pandemic, but how good did it feel to kick things back up and return to some sort of normalcy? And on a more personal level, getting your start as the No. 1 announcer at Belmont?

JI: I really thought about that race for quite a while. It was a unique scenario, even perhaps more unique than a Belmont S. Let's hope that we don't have to go through that again. Hopefully, [my call] came across O.K. There were some butterflies in the belly for the first race out. I'll tell you that.

Q: That first race back, and your stretch call, was on almost every major New York news channel that evening. Other than the Belmont S., you don't really see racing in that kind of spotlight in this media outlet anymore.

JI: It got a lot of coverage, which was really neat. I didn't really think of it that way at first where our sport was the first one back in New York after all this time. Sometimes you get so involved in what you're doing, that you kind of forget about the outside world. If the race went off at 1:18 p.m., I was a very happy camper at 1:20 p.m.

Q: Growing up in Queens and spending your college days at St. John's, I take it you spent a lot of time at Belmont and Aqueduct? How did you catch the racing bug?

JI: Actually, my brother and some of my uncles were bigger racing fans than I was, and I would go occasionally. If they were going to go, I would tag along. It was clearly the Affirmed-Alydar match up in '78 that got me the bug. And Affirmed and Steve Cauthen, I thought that was just a tremendous story. Affirmed was my first love as far as horse racing was concerned and I've been a fan ever since.

Q: Winning a NY Daily News contest has led to a lifelong career at NYRA and you celebrated your 40th anniversary with the organization in November. What do you remember about the contest and how it all came about?

JI: You had to make a tape–you could go to the track if you wanted to-but I actually made one in my brother's living room, just did a recreation of a race. I sent that in, and from that, they narrowed it down to three people who would do a live call. Mine was July 25th of '79, and up until that point, that was probably the most nervous I've ever been doing anything. [Track announcer] Marshall Cassidy was up there with me during the call.

The gig–you didn't get anything as far as announcing was concerned-but you got a job in the press office, and as it turned out, they asked me to come on board. That was the end of July, and I started working for NYRA on Nov. 5 of '79 in the press office doing notes, backstretch stuff, helping out doing the first media guide and then went from there.

Q: You've had plenty of different roles throughout the years at NYRA, including working alongside Harvey Pack on Inside Racing, as well as several behind-the-scenes responsibilities with NYRA TV. Looking back at all your time at NYRA, can you reflect a little bit? What are some of the things that stick out?

JI: It's funny. During the 40 years, I've been a media specialist, a coordinator, an assistant announcer and now an announcer, a producer, a director, on-air talent, a host, a co-host, etc.

Really one of the first things that I did, or got involved in, has stayed with me for a long time. The weekly Frank Wright show that aired on Saturdays on Channel 9. You got to see the late double on Saturdays at Belmont, Aqueduct and Saratoga. I got to be in the production meetings as a liaison with Frank Wright, Charlsie Cantey, Marshall Cassidy, and learned how they put a show together. Those were really fun times as a young kid just getting my feet wet at the track, but also being involved in the only racing show that there was at the time.

Doing the stuff with Harvey, whether it be Inside Racing, you learn so much from watching different people without even having to ask questions. Whether it be him or Tom [Durkin]. The person who spent the most time with me regarding announcing was Marshall [Cassidy]. I would go next door at Aqueduct and do a call into a tape recorder and go back into the booth and he would watch the replay with me while listening to my call and he really helped me out a lot.

And listen, you don't have to be a brain surgeon to pick up on some good things if you spent 24 years listening to Tom Durkin, either. One of the most important things he ever told me was that I shouldn't listen to him. And what he meant was, he wanted me to develop my own style. Tom had a lot of good catch phrases that he used, and he didn't think that's what I should do. And he was right.

Larry [Collmus] was terrific for the five years he was with us, too, and now I have my chance to do my thing.

Q: That leads into my next question. Any announcers out there that you admire, past or present? Sounds like Tom would be at the top of the list?

JI: I firmly believe Tom is the greatest announcer that there has ever been. And it goes beyond some of his legendary calls, whether it be Rachel [Alexandra] at Saratoga or some of the near misses in the Belmont. It was really a daily freshness that he brought to his craft that I think is unparalleled.

The announcer who had the best voice was Dave Johnson. He just had a cadence–he was right there with where his voice was for a track announcer.

Q: Each announcer kind of does things a little differently getting ready for a day at the races, whether it be a colored program, playing out the race first off pp's, etc. How much prep work goes into calling a card for you?

JI: I do color the program for the silks, and make notes for blinkers and caps. I make as many notes as I can. I'm not one to handicap though. Listen, Tap It to Win is supposed to go to the lead in the Belmont. You do have a little bit of anticipation in certain big races. But when it comes to the everyday stuff, I'm going to leave the 'who's going to be on the lead' to the handicappers. One of the main reasons I say that, it's that great phrase, 'You never know what's going to happen when they open those gates.' You can think the four horse is going to the lead and he comes out a little slow and now you've got to adjust the call. I take the approach, 'See the horses, call the horses,' wherever they may come out.

Q: You touched on Affirmed and Alydar's epic rivalry before and how much it influenced you. That has to be your favorite Belmont, right?

JI: No question, it's still the greatest race I've ever seen in person and I was in the stands for that. To think that they went at it like that after the Derby and Preakness with a Triple Crown on the line–I don't know if we'll ever see a match up like that again.

Q: This year's Belmont is obviously very different, but Tiz the Law is certainly a worthy headliner. Early thoughts on the race?

JI: With everything being so different this year and with horses being so lightly raced these days, we don't know how good Tiz the Law really is yet. Maybe he's a superstar. That's kind of the mystery that makes it fun. That's always the fun part about the 3-year-olds. You just don't know when that horse is going to appear that the public is really going to embrace. We've got a major race to be run Saturday, so let's see. Maybe Tiz the Law blows them out of the water. Or maybe we just have a good race and that becomes the story and we go from there.

Q: The gate won't be lined up in front of the stands, and the building will be empty, but what kind of emotions will you be feeling as they head to the gate at 5:42 p.m. ET Saturday?

JI: Hopefully, controlled excitement. I'm following a tremendous group of broadcasters. It's certainly a thrill and an honor.