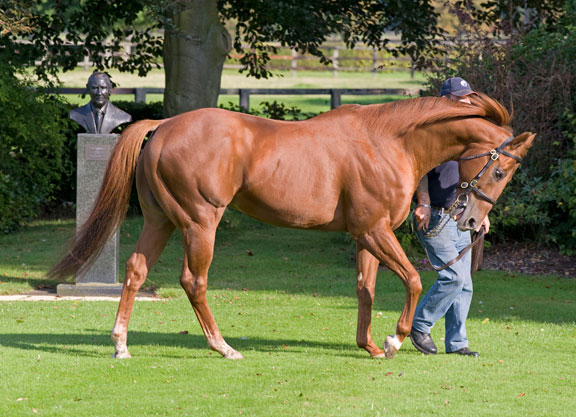 Dual Group 1-winning juvenile and accomplished sire Bahamian Bounty (GB) (Cadeaux Genereux {GB}-Clarentia {GB}, by Ballad Rock {GB}) has died aged 26 at the National Stud, where he stood his entire stud career from 1998 until he was pensioned in 2015.

“Bahamian Bounty has had a wonderful career both on the racetrack and at stud, producing group winners year after year and achieving fantastic results in the sale ring for breeders,” said National Stud Director Tim Lane. “His gentle nature has always made him a firm favourite with staff and visitors alike, even during his retirement. He has been an outstanding servant to us and we are extremely proud to have had the opportunity to stand him throughout his career. He will be sorely missed by all at the National Stud.”

Bred by Clarents Racing and purchased by Edward St. George's Lucayan Stud for 45,000gns as a yearling, Bahamian Bounty bested Zamindar in the 1996 G1 Prix Morny in his third start for trainer David Loder. He was purchased privately by the Maktoum brothers thereafter and won the G1 Middle Park S. in the colours of Sheikh Maktoum. Bahamian Bounty was transferred to Saeed bin Suroor for his 3-year-old campaign, but went winless in two tries and was retired after finishing fourth in the G1 July Cup.