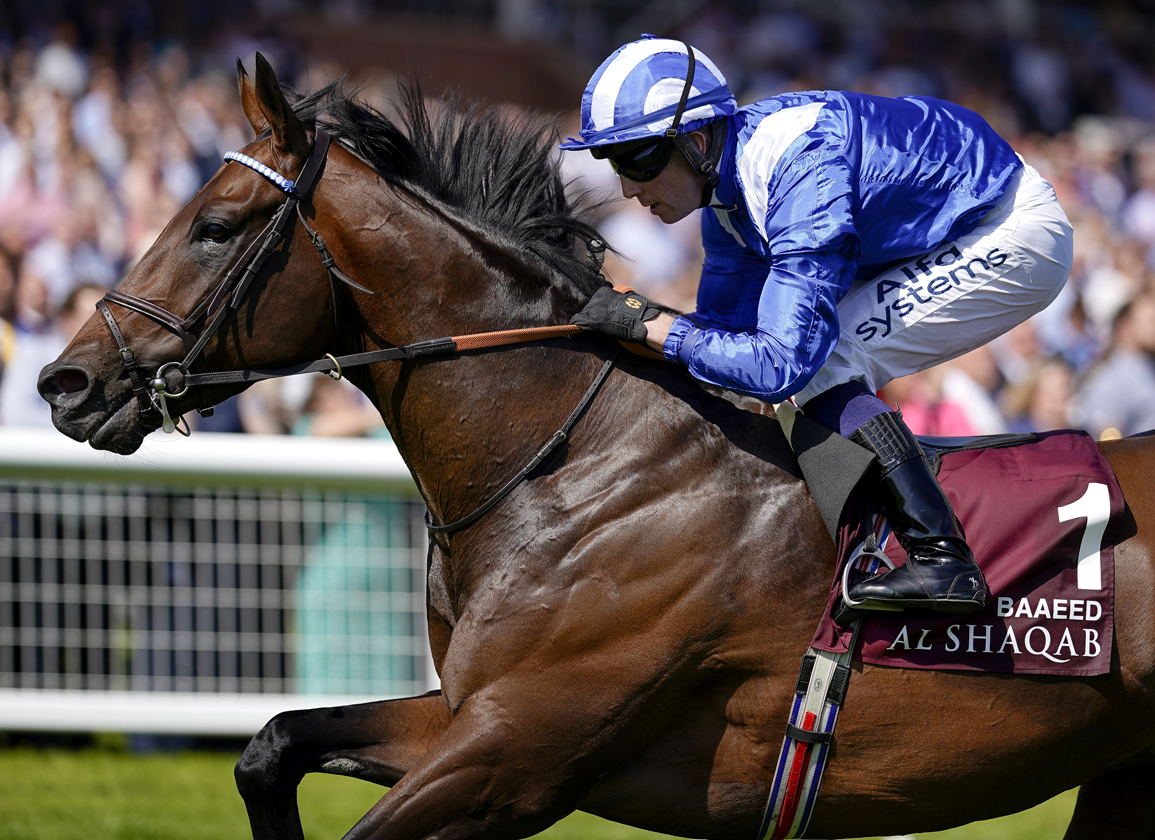 Unbeaten through six starts after annexing last October's G1 Queen Elizabeth II S. at Ascot, Shadwell Estate Company's 4-year-old homebred and G1 Prix du Moulin hero Baaeed (GB) (Sea The Stars {Ire}–Aghareed, by Kingmambo) launched his quest for superstardom by putting a stellar field to the sword in Saturday's G1 Al Shaqab Lockinge S. at Newbury. Europe's top miler of 2021, and the world's joint-highest alongside Hong Kong's immovable force Golden Sixty (Aus) (Medaglia d'Oro), made relentless progression throughout his perfect sophomore campaign and continued in similar vein to plunder Britain's first elite-level contest of the season for older horses by daylight in scarcely believable fashion. The April-foaled bay was considered by the betting market to be almost unbeatable and hit the lids as the 4-9 favourite. Comfortable and in a smooth rhythm behind the leaders racing fourth until beyond halfway, he was angled into an open lane with 2 1/2 furlongs remaining and left toiling rivals in his wake once shaken up for control approaching the final eighth, powering clear in highly impressive style to win as champions do by 3 1/4 lengths from Real World (Ire) (Dark Angel {Ire}). Chindit (Ire) (Wootton Bassett {GB}) was best of the remainder, 1 3/4 lengths adrift, and earned his first Group 1 black type at the fifth attempt.

Success brought a second renewal for both Shadwell and Jim Crowley, who teamed up with Mustashry (GB) (Tamayuz {GB}) in 2019, but it was a first for William Haggas hot on the hooves of a banner week at York's May festival. Baaeed is now set to head to the Knavesmire himself, via Royal Ascot's G1 Queen Anne S., for a first go at 10 furlongs in August's G1 Juddmonte International. The great Frankel (GB) (Galileo {Ire}) inhaled both contests in 2012, taking in a G1 Sussex S. along the way.

“He is an absolute pleasure to ride and very straightforward,” beamed Crowley. “Everything went smoothly and it was like clockwork. There was not a lot of pace in the race, but he has such a turn of foot and, if they had gone quicker, it probably would have helped him. He is the most beautifully-bred horse and is everything you want in a racehorse. Nothing seems to faze him and he doesn't appear to have any weaknesses. I can't think of one. He is really bright, he has gears, he relaxes and he stays the mile extremely well. He has got a turn of foot and you couldn't ask for more. You would imagine the Juddmonte International would be tailor-made for him.”

Haggas added, “I have to say I have never been more nervous before a race than I was today. There was a bit of pressure, because all you fellows keep writing nice things about him, but he did it nicely today. I would not go as far as to say he is the best horse in the world–that is the sort of thing others might say–but he has done very well. It was a strongish field, there was a Classic winner in there and two fillies who were very useful last year, so he has done really well. If we step up to a mile-and-a-quarter, and if he stays fit and healthy, we will go for the Juddmonte.”

For long-time Sheikh Hamdan confidant Angus Gold, it was a win of high significance for Shadwell. “You can't underestimate how important he is, he's a massive asset for the operation,” he said. “Since Sheikh Hamdan died we're a smaller operation, as everyone knows, so to get a horse of this class is absolutely fantastic for the family and everyone in Dubai. He worked brilliantly, with two good horses, at Chelmsford the other day and you want to see them do it on their first run back. You are hopeful, obviously, but you never quite know until you see them on the track. For me, and in my experience, it is rare to get a horse of his ability and his temperament. He's just the most charming horse with great character, so he makes everybody's job easy. He's very straightforward.” Allowing himself a moment of reflection, Gold continued, “Sheikh Hamdan adored his breeding and his pedigrees. He loved looking into them and he'd have been thrilled to come up with a horse from that [Height of Fashion] family, most of whom stay well.” Looking ahead, he added, “I'm sure Baaeed will go further if we want to, but I don't think we need to straight away. He's still got the speed for a mile, so we'll stick at that for the time being. The obvious race is the Queen Anne, but I'd love to see him go up to the Juddmonte [International at York] and the [G1] Champion [S. at Ascot]. That would be the perfect way to showcase his versatility.”

Baaeed, the fifth of eight foals, is one of three scorers out of Listed Prix de Liancourt victrix Aghareed (Kingmambo), herself a daughter of MGISW US champion Lahudood (GB) (Singspiel {Ire}). Lahudood, in turn, is a granddaughter of Listed Cheshire Oaks runner-up Bashayer (Mr. Prospector), herself one of seven black-type performers out of MGSW blue hen Height of Fashion (Fr) (Bustino {GB}). Bashayer, runner-up in the Listed Cheshire Oaks, is a full-sister to dual stakes victrix Sarayir, herself the dam of three stakes winners headed by the G1 1000 Guineas and G1 Coronation S. heroine Ghanaati (Giant's Causeway). Wijdan, another full-sister to Bashayer, ran second in the Listed Pretty Polly S. and is the dam of GII New York S. winner Makderah (Ire) (Danehill) and G2 Premio Ribot victrix Oriental Fashion (Ire) (Marju {Ire}). Bashayer is also kin to five black-type winners headed by MG1SW sires Nashwan (Blushing Groom {Fr}) and Nayef (Gulch). Baaeed is a full-brother to MGSW G2 Dubai City of Gold winner Hukum (Ire) and a half to the hitherto unraced 2-year-old colt Naqeeb (Ire) (Nathaniel {Ire}) and a yearling colt by Night of Thunder (Ire).

❤️ Baaeed. Sit back and watch on repeat. pic.twitter.com/vtqTghttoJ