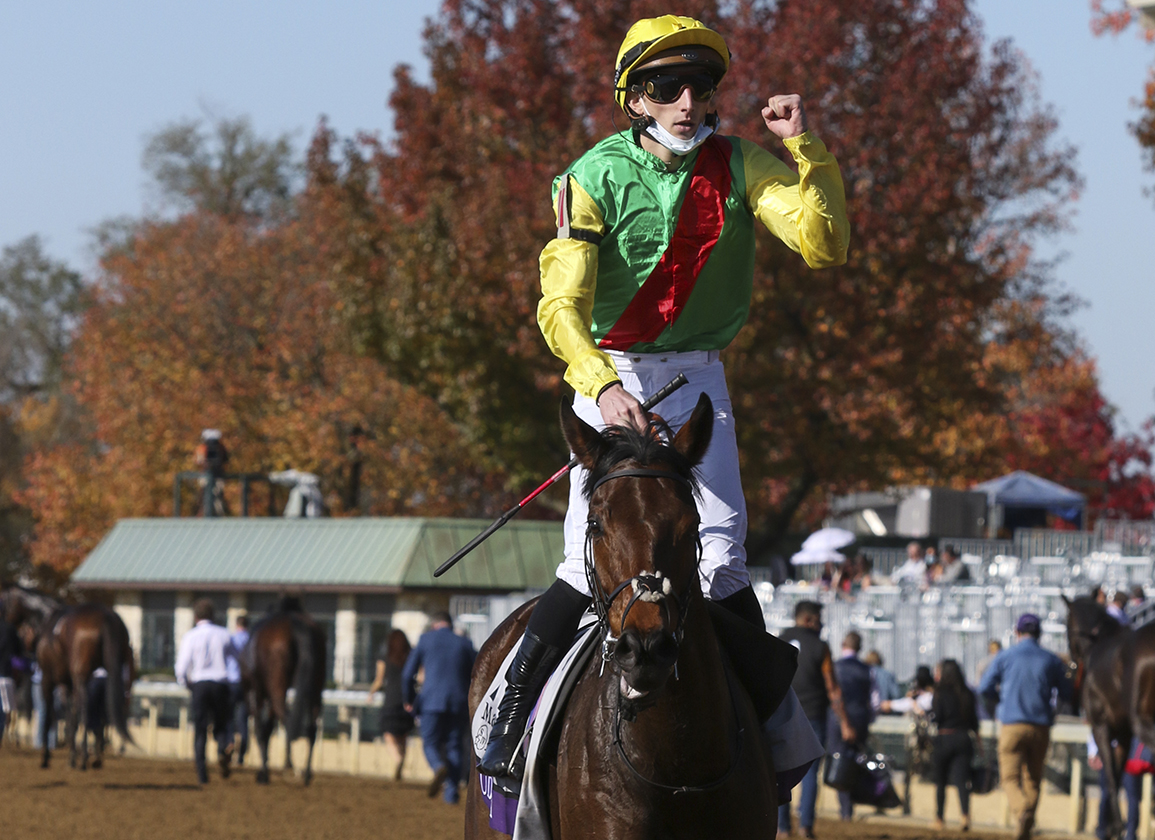 With the major contests going the way of the 3-year-olds so far, it is up to Audarya (Fr) (Wootton Bassett {GB}) to attempt to bring that generation back into line a touch in Thursday's G1 Qatar Nassau S. at Goodwood. Improving markedly at this stage last term, Alison Swinburn's 5-year-old captured the G1 Prix Jean Romanet on soft ground at Deauville in August, was third to Tarnawa (Ire) (Shamardal) in the G1 Prix de l'Opera on heavy at ParisLongchamp in October before capturing the GI Breeders' Cup Filly & Mare Turf on firm going at Keeneland in November. Giving Love (Ire) (Galileo {Ire}) a scare when 3/4-of-a-length second to that luminary in the G1 Prince of Wales's S. at Royal Ascot June 16, she sets a clear standard on that form. “Audarya ran really well at Royal Ascot and she's come out of the race in good form,” trainer James Fanshawe said.

“Six weeks is a nice gap between races when you are taking things step by step and we've had this race in mind for a while. She's got better as she's got older and she's doing everything right at home. It was fast ground at Keeneland and Royal Ascot, but she shouldn't have any problem on easier going because it was very testing last year when she won the Romanet and very soft when she ran so well in the Prix de l'Opera.”

Also flying the flag for the older fillies and mares is Lady Bowthorpe (GB) (Nathaniel {Ire}), who like Audarya has gone from strength to strength since last summer and seeks a first top-level success after two fine efforts at this level in 2021. Runner-up to Palace Pier (GB) (Kingman {GB}) in the G1 Lockinge S. at Newbury May 15 and fourth when suffering a troubled trip in the G1 Falmouth S. at Newmarket July 9, she tries this 10-furlong trip for the first time having won over nine in the May 2 G2 Dahlia S. at Newmarket. “She's grown up as a 5-year-old mare and she's much more amenable now,” trainer William Jarvis said. “As a 3 and 4-year-old, we thought she was very much a soft-ground filly but her run in both the Dahlia Stakes at Newmarket and more recently in the Falmouth Stakes were on good-to-firm ground and I think she's pretty adaptable. She was very tired when she came out of the Lockinge Stakes, but we had a very good preparation between Ascot and Newmarket and she's really been pleasing me since the Falmouth.”

Aidan O'Brien puts forward two high-achieving 3-year-olds in the June 20 G1 Prix de Diane winner Joan of Arc (Ire) (Galileo {Ire}) and Empress Josephine (Ire) (Galileo {Ire}), who beat her stablemate in the G1 Irish 1000 Guineas at The Curragh May 23. “We are lucky to have some great fillies and we try to keep them apart and give them their best chance by picking the races which will suit them best, but we have been aiming both of these fillies for this race,” he said. “Joan of Arc won the Prix de Diane and has been progressing lovely all season. Empress Josephine will be stepping up to a mile and a quarter. We went further with her in Gowran before she won the Guineas and then went back in trip. She's a full-sister to Minding, who got a mile and a quarter and got a mile and a half. It's possible she could leave that Gowran run behind her and get the trip, but she is a filly that's got plenty of speed.”

Shadwell's Zeyaadah (Ire) (Tamayuz {GB}) beat Mantonbury Stud's Technique (GB) (Mastercraftsman {Ire}) by a cosy head margin in the G3 Hoppings Fillies' S. over this trip at Newcastle June 25 and the former's trainer Roger Varian is hoping the ground continues to dry. “She'll need to step up on the Newcastle form to win a Nassau, but while she only won a head she was in command at the line there. Bar the Oaks, she's done nothing wrong in her career. There was only one winner that day and the rest were nowhere. I think she's a 10-furlong filly and I also think she's a better-ground filly now she's going up against better horses, although she's got soft-ground form. She's in good form and I think she's ready for this test.”

In the G2 Unibet Richmond S. for the 2-year-olds, Sheikh Rashid Dalmook Al Maktoum's June 17 G2 Norfolk S. winner Perfect Power (Ire) (Ardad {Ire}) bids to defy a penalty moving up from five to six furlongs. His defeat of Go Bears Go (Ire) (Kodi Bear {Ire}) was made to look even better after the runner-up captured the G2 Railway S. and there is no reason on pedigree and racing style that he will not be at least as effective over this trip. “He has a three-pound penalty for his Royal Ascot win, which is always tough but the horse is in great order,” trainer Richard Fahey commented. “The ground is drying up and should be beautiful by the Richmond Stakes, possibly just on the dead side but he should handle that. I have no worries about going up to six furlongs, in fact I think he'll be better for it.” Leora Judah's Asymmetric (Ire) (Showcasing {GB}) looks to add to Alan King's week to remember and has sound claims based on his second to Lusail (Ire) (Mehmas {Ire}) in the G2 July S. at Newmarket July 8, while Jassim bin Ali Al Attiyah's July 17 Weatherbys Super Sprint winner Gubbass (Ire) (Mehmas {Ire}) represents the Richard Hannon stable.

In the G3 John Pearce Racing Gordon S., the June 26 G1 Irish Derby third and July 14 G1 Grand Prix de Paris runner-up Wordsworth (Ire) (Galileo {Ire}) takes the next step towards a G1 St Leger bid. He is joined by stablemate Sir Lucan (Ire) (Camelot {GB}), who beat him in the 13-furlong Listed Yeats S. at Navan May 15 but has been absent since. “I don't think you can readily rule out any of these, so it's a competitive group 3, albeit one lacking a stand-out,” Wordsworth's rider Ryan Moore commented. “That said, I think my mount Wordsworth is the one to beat in here, even if Sir Lucan got the better of him the last time they met at Navan back in May. Wordsworth has clearly improved since then, being placed in group 1 company on his last two starts and his Grand Prix de Paris second last time came in testing ground.”