Art Collector Puts Sire Back In the Frame 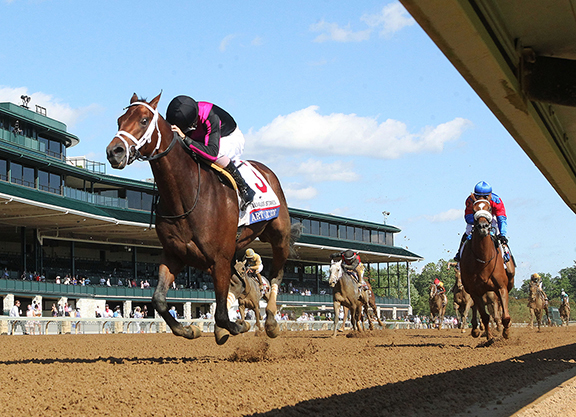 Maybe he was just born too beautiful, and too rich, to be setting the alarm every single morning and riding the same suburban train to work. He can leave the maximisation of income, the humdrum consistency, to lesser creatures. Like some aristocratic dilettante touched by genius, however, Bernardini (A.P. Indy) remains ever capable of producing a masterpiece.

The Darley stallion had lately become so slack–only two graded stakes winners in each of the past two years–that this spring he suffered his third consecutive cut, to just $40,000, having commanded a six-figure fee as recently as 2017. At the same time, however, he was emerging as a priceless option for breeders who might retain a filly for their broodmare band.

In a curious trade-off, the more Bernardini’s own runners lost momentum, the more precocious he has proved as a broodmare sire. But let’s not forget that we are still talking about the sire of 10 domestic Grade I winners (plus three in Australasia and one each in Dubai and Italy); and one who remains younger, at 17, than the few active sires who can match or better that tally. And now it might just have taken his fancy to pull a Derby winner out of his hat.

Wind back a month or so, and the GII Toyota Blue Grass S. was only going to confirm his recent direction of travel. Connections had decided that the scintillating Maxfield (Street Sense), who is out of a Bernardini mare, would sit out the GI Belmont S. and instead return to the track where he had last fall produced the standout juvenile performance of the year.

A couple of days later, however, Maxfield suffered the second untimely injury of his career–and hindsight makes it hard to believe he would not have won the GI Breeders’ Cup Juvenile, but for the first–and would miss not only the Blue Grass but also the postponed GI Kentucky Derby itself.

In his absence, last Saturday’s race drew a field of 13 including the adventurous filly Swiss Skydiver (Daredevil). She ran a fine second, but the authoritative winner–by 3 1/2 lengths, with the chasing pack of colts beaten almost another five–was a flourishing son of Bernardini.

Art Collector has really got on a roll since switching to dirt, getting better with experience and clearly thriving in the hands of Thomas Drury, Jr. On his previous start he had thrashed Shared Sense at Churchill and, while Art Collector controlled a light pace that day, the Godolphin colt (himself, like Maxfield, by Street Sense out of a Bernardini mare) reinforced the form three days before the Blue Grass by winning the GIII Indiana Derby.

Home-bred by Bruce Lunsford, Art Collector is the second foal of his GI Flower Bowl S. runner-up Distorted Legacy (Distorted Humor). (She was also beaten barely a length when just missing the podium in the GI Breeders’ Cup Filly and Mare Turf in 2011.) She is a half-sister to Grade II winner and millionaire Vision And Verse (Storm Cat), who also went close at the elite level, denied both the GI Belmont S. and GI Travers S. only by Lemon Drop Kid (Kingmambo).

Lunsford bred both from a mare he had acquired as a transfusion of noble Greentree blood. Bunting (Private Account) cost $500,000 at Keeneland November as a 3-year-old back in 1994: and little wonder, as she was not only Grade I-placed but also a grand-daughter of the Greentree matriarch Bebopper.

Bebopper was a Tom Fool half-sister to the dam of Buckaroo, the pair out of an imported half-sister to an Epsom Oaks winner. Her 11 winners, headed by Stop The Music and Hatchet Man (consecutive GII Dwyer S. winners, among other distinctions), also included a four-time winner by Hoist The Flag named Flag Waver.

Flag Waver can also be found as fourth dam of multiple Grade I winner Stopchargingmaria (Tale of the Cat)–so ensuring a family echo, Stopchargingmaria being out of a mare by Buckaroo’s son Montbrook–but concerns us here as the dam of Bunting. It’s not hard to see the thinking: by Private Account out of a Hoist The Flag mare, Bunting represented the same model that had produced Hall of Famer Personal Ensign.

Now, as it happens, it was Personal Ensign’s daughter My Flag (Easy Goer) who ran down a daughter of Quiet American named Cara Rafaela to win the GI Breeders’ Cup Juvenile Fillies of 1995. That was one of five occasions on which Cara Rafaela finished second at Grade I level, but she did get the elite score she deserved–narrowly, in her ninth juvenile start–in the Hollywood Starlet S.

Cara Rafaela belonged to what turned out to be remarkably resonant first crop by her sire. Quiet American’s track career had given him limited early traction at stud: after a fruitless start in Europe, the son of Fappiano had got his act together in California too late to make an oversubscribed field for the GI Breeders’ Cup Classic–only to win the GI NYRA Mile H. (now the Cigar Mile) by five lengths in 1:32 4/5 the following weekend. Unfortunately he had to be retired after a single start at five, and dust gathered on his reputation while rival newcomers made their case to breeders over the rest of the year.

So it was quite something for just 32 named foals in his first crop to include three females as accomplished as champion Hidden Lake; Quiet Dance, later dam of one Horse of the Year in Saint Liam (Saint Ballado) and second dam of another in Gun Runner (Candy Ride {Arg}); and Cara Rafaela.

Though her produce record was otherwise insipid, Cara Rafaela’s 2003 foal by A.P. Indy was a stunner. Unraced at two, Bernardini progressed quickly enough to join the Classic fray in the GI Preakness S., where his five-length success was tragically overshadowed by the Barbaro (Dynaformer) disaster. He secured due attention (and the sophomore championship) with processional wins in the GII Jim Dandy S., GI Travers S. and GI Jockey Club Gold Cup, by an aggregate of 23 lengths, though was foiled by Invasor (Arg) (Candy Stripes) when bowing out at the Breeders’ Cup.

Bernardini, then, went to stud with a good deal more fanfare than his own sire, having earned $3 million in a career spanning less than a year. He was launched at $100,000, and for a couple of years managed to get up to $150,000 after his opening crops featured the likes of To Honor and Serve, Stay Thirsty and Alpha (the latter pair both emulating his Travers success). With his stock often stamped with his physical beauty, he also punched his weight at the sales. In 2014, his Keeneland September average was behind just Tapit and War Front; and he has always been a big hitter at juvenile auctions.

To be fair, then, any recent decline is from the highest of standards–which he is certainly meeting, meanwhile, as a broodmare sire.

Now we know this to be a sector dominated by veteran, pensioned or deceased stallions; and Bernardini’s daughters only opened his graded stakes account in 2016. (For the record, through Dark Nile (Pioneerof the Nile) in the GIII Delaware Oaks). By 2018, however, he was adding to his Travers resume with Catholic Boy (More Than Ready). And last year, no fewer than five of his daughters assembled Grade I laurels via Serengeti Empress (Alternation), Wicked Whisper (Liam’s Map), Hunter O’Riley (Tiz Wonderful), Dunbar Road (Quality Road) and, as noted, Maxfield. Auspiciously, a couple of these qualify as the best performer by their respective sires.

I’m not sure that anyone knows quite what makes a great broodmare sire. Is there some kind of physiological inheritance, conceivably one as practical as helping the nursing foal to thrive? Or should we sooner seek, paradoxically, some typically ‘masculine’ traits of physical or mental toughness?

Whatever the reason, I am convinced that compounded, proven distaff influences represent a far better foundation for a pedigree than the supposed alchemies flimsily peddled between given sire-lines. As I’m always saying, all pedigrees are a mesh of genetic strands and the only reason I can see for picking out just two, as somehow over-riding the rest, is the credulous hunger for a “formula.” You are surely better off seeking quality across a pedigree, so that it barely matters which strand comes through. And there’s no better way of doing that than through the copper-bottomed distaff “brands.”

For one thing, you often find that good broodmare sires are out of mares by good broodmares sires. The sires of Urban Sea and Toussaud, for instance, are both out of Buckpasser mares.

And while entire sire-lines are always being credited with a character that seldom bears coherent explanation, broodmare power is one strength that does seem to repeat between generations.

So you get clusters like Princequillo; his daughter Somethingroyal; her sons Secretariat and Sir Gaylord; and the latter’s sons Sir Ivor, Habitat and Drone. Or the Deputy Minister dynasty: sons to extend his distaff influence include Dehere, Touch Gold and Awesome Again, whose son Ghostzapper has a growing reputation in this sphere.

Of course, many top broodmare sires are top sires, period, like Storm Cat. But it is striking how often this dimension of their legacy comes into a different type of focus, as when American Pharoah emerged from a Yankee Gentleman mare.

Bernardini’s flying start as a broodmare sire is a classic example of entwined influences. His sire A.P. Indy, whose recent obituaries celebrated his own record as a broodmare sire, is out of a storied mare, Weekend Surprise, who combined the ultimate distaff brands of the era: she was by Secretariat out of a Buckpasser mare whose own dam was by Secretariat’s half-brother Sir Gaylord.

As for Quiet American, he was famously not only by a son of a Dr Fager mare out of a Dr Fager mare; both these mares were also grand-daughters of Princequillo’s daughter Cequillo. For what it may be worth, moreover, Cara Rafaela traces to the matriarch Fast Line through one of her daughters by Princequillo’s son Prince John. (The other, incidentally, was dam of Northern Trick).

Lest we forget, of course, we are celebrating a revival in Bernardini’s primary role as a sire of runners. But if Art Collector earns a place at stud, you couldn’t be surprised if he, too, were to prove an effective broodmare sire.

Overall this is a genetic “stairwell,” top to bottom, that barely misses a step in terms of Classic caliber. And a Derby colt is no less than his connections deserve. Colleague Bill Finley last week highlighted how patiently trainer Drury has paid his dues; while Art Collector’s owner-breeder has now exorcised a sad experience in the 2006 Blue Grass, when First Samurai (Giant’s Causeway)–a dual Grade I winner he owned in partnership–ended his career with a gate injury.

Perhaps the $100,000 required in 2016 to cover Distorted Legacy had begun to feel like a questionable investment, with Bernardini’s fee plunging in the meantime. But it’s looking good business now. Form is temporary, they say, and class permanent. In a business as uneven as this, any stallion can endure a bumpy spell.

Last Saturday also reiterated Bernardini’s ascendant stature as broodmare sire, through the latest success of Dunbar Road (GII Delaware H.). But in measuring him only against all those ageing or dead stallions, we run the risk of prematurely treating him as an old master. For anyone who pins their faith in beauty, class and genes, then, how wonderful to see Art Collector restore his sire to the avant garde.