Alibi Reaching for the Sky 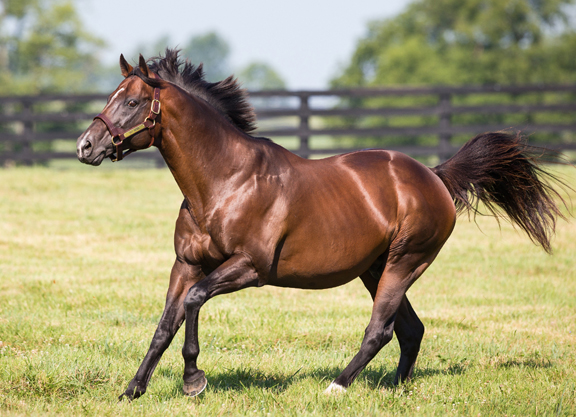 For an instructive snapshot of what's wrong with this business, just take a look at the plunge in the going rate for yearlings by almost all sires represented by their second crop.

Not even the most precocious, remember, have yet launched half their named foals onto the track; while most of those whose stock will only flourish with maturity, and two turns, have barely dipped a toe in the water.

Yet only a handful, having achieved an early impact from a low base, have actually advanced their averages. For the rest, even treading water is a triumph. Because some have seen their second crops halve in value, or worse, despite perfectly respectable stats among their few runners to date.

Farms nowadays feel obliged to throw everything at new sires, to maximise their shop window in a market manically prejudiced in favour of untested risk. Yet that same window is increasingly likely to be boarded up overnight, as the next intake of new blood opens for business next door.

Today's market is floodlit by candles that burn brightly but briefly, being all wick and no wax. And it is becoming harder and harder for stallions to find a niche in which a low but sturdy glow can safely endure the fitful draughts of fashion.

Harder and harder, that is, to emulate the sire of Perfect Alibi, who bids to consolidate her status among the season's leading juvenile fillies in the GI Darley Alcibiades S. at Keeneland today.

Strange to reflect that Sky Mesa (Pulpit), now 19, was himself once a young stallion who had talked the talk but apparently not walked the walk. As an unbeaten Grade I winner at two–underpinned by a terrific pedigree, plus brawn, balance and conformation–his sales debut had even been highlighted by a seven-figure yearling. But a solitary black-type performer from 43 juvenile starters, out of that first crop, was the kind of return that would today probably earn him a one-way ticket to Oklahoma or Korea.

The business was not quite so hysterical and jittery in those days. And after a handful of that first crop matured into graded stakes winners, he then produced two elite scorers from his second, foaled in 2006: Frizette winner Sky Diva, and Blue Grass S. hero General Quarters.

Unfortunately, despite 22 other graded stakes scorers altogether, Sky Mesa did not produce another Grade I winner until Perfect Alibi won the Spinaway S. last month. Nonetheless he has carved out a reputation that few new sires, in today's market, can hope to emulate.

We all know that hardly any of them will ever again command a fee as high as their opening one, but Sky Mesa started at Three Chimneys in 2004 at $30,000 and his services cost exactly the same in 2012. As he has aged, and the market has become more puerile, his fee has slipped a notch or two and this was his third year at $15,000. But while he dropped to 63 mares last year, he had previously maintained a rock-solid three-figure average, with a devoted following among those possessed by the quaint idea of breeding a horse that can actually run (i.e. not just sell).

They know you can set your clock by Sky Mesa, who has duly produced another eight stakes winners so far this year. These include one of the most exciting unbeaten colts around in Meru, who recently burned off his pursuers in the Smoke Glacken S. at Monmouth in 1:08.93.

There really can't be much better value around at this kind of money. TDN lifetime stats show Sky Mesa producing stakes winners at a clip surpassing Tiznow, Candy Ride (Arg), Hard Spun, Flatter, Bernardini, Empire Maker, Street Sense and Union Rags, to give a random sample of more expensive stallions too excellent to be embarrassed by the comparison; and basically in step, moreover, with Malibu Moon, Kitten's Joy, Uncle Mo and More Than Ready.

It's not hard to figure out why he should have become such a consistent stallion. In grandsire and damsire he brings together Secretariat's premier achievements as a broodmare sire, A.P. Indy and Storm Cat. And the bottom line, which extends to La Troienne, starts with his MGSW dam Caress (Storm Cat)–a full-sister to Tepin's sire Bernstein out of a half-sister to champion Outstandingly (Exclusive Native).

Most interestingly, however, his pedigree is weighted both top and bottom by two really important mares: Knight's Daughter and Busanda, respectively the mothers of Round Table and Buckpasser. Sky Mesa's third dam is by Round Table, whose sister Monarchy is the fourth dam of his sire Pulpit. And his fourth dam is a half-sister to Buckpasser, whose daughter Lassie Dear is granddam of Pulpit's sire A.P. Indy.

Perfect Alibi's dam, Pin Oak's homebred stakes winner No Use Denying (Maria's Mon), complements this depth and breadth with a classy family of her own–tracing to the Calumet matriarch Two Bob, via a fourth dam who produced both champion Chris Evert and the mother of Winning Colors.

A $220,000 Saratoga yearling, Perfect Alibi is trained for Tracy Farmer by Mark Casse. She won by 9 1/2 lengths over a bare five furlongs at Churchill in May, too easily to learn a great deal, and duly found everything happening a little too quickly when rallying for a close second in stakes company at Belmont next time. But that seasoning proved critical when she bravely scuttled through heavy traffic in the GII Adirondack S.

Having herself been buffeted, runner-up Frank's Rockette (Into Mischief) was favoured for revenge in their Spinaway rematch. Once again, however, Perfect Alibi had the courage to burrow her way through a half-gap, this time on the rail. She's built to look after herself, which is certainly what she has been doing; but Casse also reckons her constructed to relish a second turn today, and is duly impressed by her deeds in sprints. Success today would confirm her as the East Coast's top candidate to topple Bast (Uncle Mo) in her own backyard at the Breeders' Cup.

What a shame that another leading lady on the West Coast, Amalfi Sunrise, is apparently unlikely to race again after an attack of pneumonia. She had contributed to such a brisk start by her sire Constitution (Tapit) that he has even bucked the trend and sharply increased the value of his second crop of yearlings.

Constitution is seizing the moment–and just as well, since a moment is all these young sires tend to get. Even so, he will do very well to become as reliable a conduit of the Pulpit line as Sky Mesa.