Home » Archive » Shared News » A Retirement Fit For a Queen

A Retirement Fit For a Queen 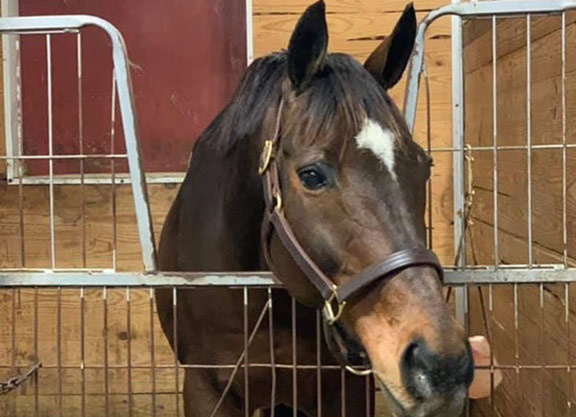 When Michelle Crawford came across the 25-year-old blue hen Tizso (Cee's Tizzy), a full-sister to Hall of Famer Tiznow, in the Keeneland January catalogue, she immediately knew she had to have her. The longtime Standardbred owner/breeder, who operates Crawford Farms in Durhamville, N.Y. with her husband Al, wanted to ensure that the mare received the retirement she deserved.

“I started going through the catalogue and she was number 90, so I didn't get very far before I said that is it, she is the one I'm getting,” Crawford said from St. Bart's, where had just arrived for what the racing industry would call a brief freshening. “Honestly, if she was 15 I probably would have turned the page, but when I saw she was 25, I said no that is not happening.”

The horsewoman, who operates Bankers Healthcare Group with her husband in addition to running their farm, continued, “I did ask a couple of people if I could buy her out of the sale, but they suggested I let her go through. There was a little bit of interest in her, so she wouldn't end up in harm's way. Once I set my sights on her, I had to have her.”

“She produced Paynter and is a full-sister to Tiznow,” said Crawford, who has 100 Standardbred broodmares and just two other Thoroughbred mares. “I am not fluent in the Thoroughbreds like I am in the Standardbreds, but I thought I was being sneaky because a lot of people don't know what to do with a 25-year-old mare. I love Frosted. I have another mare, Listen Up Now, a half-sister to La Coronel, with a Frosted in the belly, so I was very excited.”

Crawford could not make it to Lexington for the sale, so she asked a longtime friend from the Standardbred world, Philip Antonacci of Preferred Equine to check out her new addition and bid on her behalf.

“I called Phillip Antonacci with Preferred, who was a good friend of ours from the Standardbreds,” Crawford said. “He went and looked at her and said, 'Michelle, this is a home run. She is beautiful and a class mare.'”

The co-owner of MGSW Shancelot (Shanghai Bobby) continued, “She had been well taken care of by the farm. I didn't think much more of it and waited patiently for the sale. My husband was on board and I was already in love from the pictures Philip sent me.”

Antonacci secured Tizso for $62,000 on Crawford's behalf from the Taylor Made consignment. The unraced bay has produced 16 foals throughout her broodmare career with the most recent being a now-2-year-old filly by Into Mischief. Her upcoming 17th foal will be her last as Crawford bought her with the intention of retiring her to live out her days enjoying lush pastures at her 1500-acre facility.

“I just wanted to make sure she got a good home,” said Crawford. “We are very big on retirement and do a lot of rescue. She arrived at 4 a.m. at our farm in New York and was happy as a clam. She went out this morning and was grazing. My farm manager said she was just wild for 25. When she is done with this [pregnancy] and weans, she will go out to our green pastures and be spoiled with treats and live happily ever after.”

She continued, “I am very excited about her Frosted foal and I hope it is a filly so I can continue the line. I will be just as thrilled if it is a colt though and will keep him.”

Crawford has received a lot of attention on social media and has had many people reach out to her over the past 24 hours since she acquired the new queen of Crawford Farms.

“I had no idea until after [I bought her] how popular she was,” Crawford said. People started emailing me and texting me. I think I have 120 new friends on Twitter because of this mare.”