Juvenile Sales Put Fourth-Book Sires Back on the Map 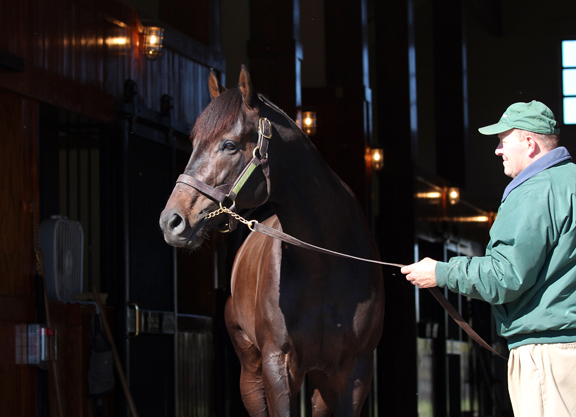 Lane's End's Unified saw a 30-mare uptick in his fourth book over the past week after a successful OBS March Sale. | Photos by Z

By the time a stallion's fourth book opens, the team behind him is usually pulling out all their stops to fill those pages. But perhaps no marketing technique in their repertoire can have quite the same effect as just one big price tag when the stallion's first crop of juveniles go to market.

At last week's OBS March Sale, three first-crop juvenile sires were represented by youngsters that surpassed the $500,000 mark in the sales ring, and representatives from each of their respective farms said the phone has been ringing off the hook for breeding contracts since.

The first young sire to score a half-million-dollar sale was Lane's End's 'TDN Rising Star' Unified, when Hip 163, a Wavertree-consigned colt out of Promise Me a Cat (D'wildcat), hammered home for $530,000. The $190,000 KEESEP graduate had clocked the fastest quarter mile of Thursday's breeze show, going in :20 2/5.

Lane's End's Bill Farish said that since the colt's headline-worthy sale, Unified's book has received a major bump in numbers.

“We've gotten over 30 new contracts and they're still coming in,” Farish said. “So he's going to end up with a really nice book of mares. He's getting very close to full.”

While Unified was busy in his first two years at stud with a combined 254 mares bred, he only managed a 68-mare book in 2020, a number sure to be surpassed this year after his first crop's splash at OBS.

While Unified's $43,390 average at the yearling sales last year kept him just short of the top 10 first-crop yearling sires, a $231,000 average coming out of the OBS sale has him in the early running for the leading 2-year-old sales average within his class.

“They certainly looked, as yearlings, like they would be good 2-year-olds,” Farish said. “But once you get a saddle under them and they get into training, you can tell a lot more about if that's a genuine thing or not. It certainly looks like Unified is answering the questions the right way.”

A second first-crop juvenile sire garnered attention before the sale began when Hip 531, a son of Spendthrift's Gormley, fired a :9 4/5 bullet at the breeze show. On the second day of the sale, the $160,000 Fasig-Tipton Select yearling pinhook for Eddie Woods's Quarter Pole Enterprises went for $550,000 to Breeze Easy LLC.

“I got calls from several people about that horse,” Spendthrift's Mark Toothaker said of the youngster. “I had heard Eddie reviewing his group before the sale and he talked highly of him before he ever breezed, so that lets you know you're seeing some nice things moving towards the sale.”

Toothaker said that he, too, has been busy taking calls from breeders interested in sending mares to Gormley.

“I think we've done about a dozen seasons off of the sale,” Toothaker said. “We're hoping that he can follow it up with another strong sale in Miami [at the Fasig-Tipton Gulfstream Sale, Mar. 31] to really get us some momentum, but we definitely picked up some business. It isn't to the point yet where we're full and trying to turn people away, but it certainly has helped.”

Toothaker added that Gormley's success at OBS is also reflected in the attention he's received from Share the Upside investors.

“One of the things we've seen is that some of the people who had not named a mare on their free spot now have called and have named a mare,” he said. “So we have picked up some business with the sale, but it has also stimulated our breeding right holders to go ahead and breed a mare to him this year. We've been reaching out to folks to make the pitch that, 'Hey, this horse is right there for leading freshman sire. Wouldn't you want one in foal to him?'” 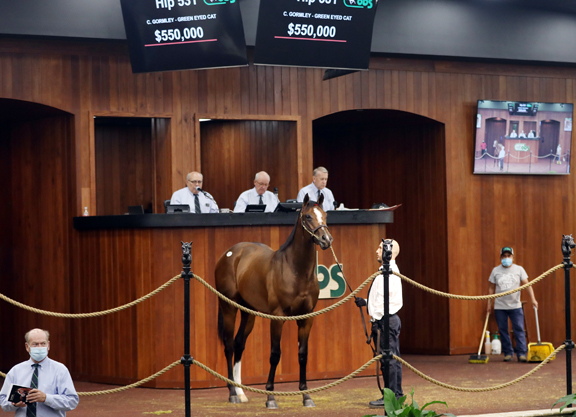 Eddie Woods-consigned colt out of Green Eyed Cat (Tale of the Cat) one of three juveniles to reach six figures for Spendthrift's Gormley. | Photos by Z

“When you sell them as yearlings, there's a missing piece in the equation,” Toothaker replied when asked on what changed as Gormley's first crop matured from yearlings to juveniles. “They can look fast as yearlings, but when you go through the ring as 2-year-olds they have to be fast. I think Gormley just separated himself out. [Last year], everyone looked at him as a horse with a modest stud fee and he probably sold his yearlings where they should have sold. Then when they had a chance to perform on the track, that changed the metrics and he increased his average dramatically.”

Both Toothaker and Farish spoke about the major impact a strong showing at the early juvenile sales can have on a stallion's book in his fourth year at stud.

“The 2-year-old sales are big help,” Toothaker said. “They get your name out there and it makes people take a second look. That's all you're asking, is to still be in the game.”

“When you have a fourth-year sire, nowadays with the large books it gets tougher and tougher to find mares until breeders have something to believe in because it's a big risk to breed to a fourth-year sire if you're not very encouraged by what you're seeing,” Farish echoed. “When they have good results at the sales it can really make a difference.”

Both Gormley and Unified will have to contend with a third major player for leading freshman sire status.

Practical Joke made a major splash at last week's sale with a $750,000 sales topper and four more juveniles reaching six figures, and while Coolmore's Adrian Wallace said the farm has received inquiries about the Ashford resident over the last few days, his book was full before the sale began.

“Yes, we've gotten calls on Practical Joke this week, but unfortunately we've been unable to fulfill their requests because Practical Joke is the worst-kept secret out there,” he said. “His 2-year-olds have been doing very, very well and they have been from the beginning, so most people were aware that the horse has been full before we got to see the results from the March sale.”

Practical Joke's leading sale at OBS was Hip 311, a filly out of Peruvian champion Valiant Emilia (Per) (Pegasus Wind). A $120,000 KEESEP purchase for Top Line Sales LLC, the daughter of the buzzed-about sire brought $750,000 after breezing in :9 4/5.

The son of Into Mischief has maintained a large book in his first few years at stud, seeing 220 mares in 2018 before filling a 200 and 188-mare book the following two years. His $120,243 yearling average last year placed him amongst the top five first-crop yearling sires.

“Not a single race has been run yet and we're very mindful of that, but nevertheless it's good to see them in demand and gallop out so well at the breeze sale, and then see a continuation of what they achieved as yearlings,” Wallace said. 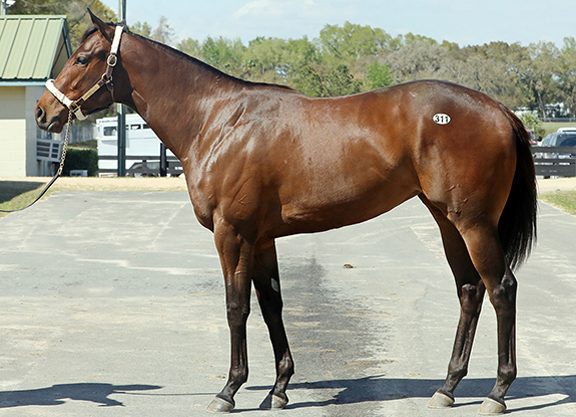 While Practical Joke didn't necessarily need the added boost of a near-million-dollar sale in order to fill this year's book, Wallace said the added publicity does nothing but help in kicking off this young sire's fourth year at stud.

“It makes them relevant,” Wallace replied when asked what a successful sale helps achieve for a young stallion. “The first-season sires, as most people are aware, are the ones that are easy to sell. They're the ones people put their faith in and they're fresh in people's minds, possibly because they could be the next biggest thing but also because they've never done anything wrong. There's less risk involved.”

He continued, “By the time you get to the fourth and fifth year, the talking stops and the advertising stops, so it very much depends on how they sold as yearlings and how the 2-year-old buyers perceive them. If you're lucky enough to have a horse that's well-received in the marketplace, then it's all well and good.”

One first-crop juvenile Ashford resident that did reap the benefits of a solid OBS Sale was Cupid. Off a $46,786 yearling average last year, the son of Tapit was represented by two six-figure juvenile sales in Ocala, and Wallace reported that his fourth book has increased by 20 mares in the past week.

Both Farish and Toothaker echoed that several of their first-year juvenile sires cashed in on the results of last week.

Toothaker said the son of Pulpit had 15 slots remaining going into last week, and those spots have since been filled.

“We've been saying here for a month that we felt like with a good showing from Lord Nelson and Gormley there at OBS, it would probably finish Lord Nelson off and spark a fire underneath the breeding right holders on Gormley,” he explained.

Meanwhile Lane's End's Connect had three six-figure sales, including Hip 503, a colt that sold for $290,000 to Narvick International.

“Connect has a really good group going to Gulfstream, and from what I'm told an even better group going to the April sale,” Farish said. “He's picked up some mares, not as many as Unified, but I think his better ones are in the sales to come.”

Farish can remember another stallion at Lane's End from not too long ago that saw an explosion in demand after his first juveniles went through the sales ring.

“Stephen Got Even had a 2-year-old bring $2 million and change that Sheikh Mohammed bought,” he recalled. “His book jumped by over 100 when that happened. It was absolutely amazing. It has to be genuine when that happens because everybody down there in Ocala is too savvy, so it has to be real and that certainly set his book on fire, and Unified has had a similar reaction.”

Wallace said that Munnings is one Ashford sire that comes to mind as one who saw a jump in demand after his first juvenile sales, while Toothaker reported the same of Goldencents at Spendthrift.

Looking at the bigger picture, Farish said that for now, his sale's team must hold their breath as the whims of the market help decide the size of their stallions' fourth book, but in the future, The Jockey Club's 140-mare cap could change this trend.

“What we've seen in the last 10 years is that it's tougher and tougher to fill any stallion that is not a first year or proven,” he said. “When you're in that crucial second-through-fourth year, it's very competitive because the first-year and proven stallions are getting so many mares that it doesn't leave room for the unproven stallions. With the mare cap, all those mares are going to have to go somewhere. They're going to have to go either to additional new stallions or the second-through-fourth-year horses and hopefully smooth out that transition.”