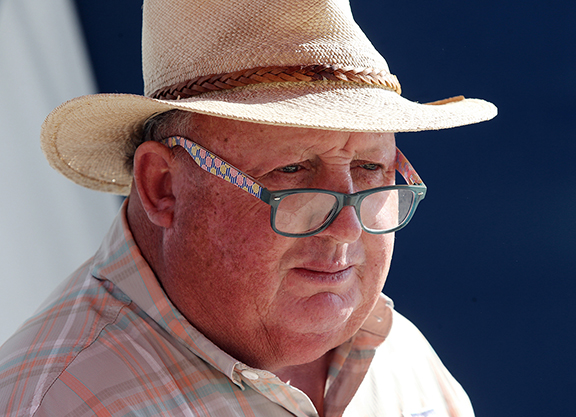 As the calendar inches inexorably towards March and a spring-long series of 2-year-olds in training sales, consignors are putting the finishing touches on juveniles heading to auction, paying particular attention to youngsters representing their stallions first crop to hit the track. The TDN is reaching out to consignors with 2-year-olds heading to the sales rings at OBS and Gulfstream Park next month to find out which freshman sires have impressed them.

“The Gormleys are very nice,” Woods said when asked which freshman sires had impressed him. “They are quick, agile horses. They look like they will be pretty precocious and early.”

Practical Joke (Into Mischief–Mystic City, by City Zip) has been much-hyped in Ocala this winter. Woods will offer a colt by the multiple Grade I winner–who stands at Ashford Stud for a fee of $22,500 this year–at OBS March (hip 113).

“The Practical Jokes are the talk of the town,” Woods said. “I have some of them and they are quite nice. Most of them–apart from one–all look the same. They lean towards that Into Mischief-ey thing–bay horses with white stripes down their faces and a white sock here and there and that kind of build to them. And they've trained well.”

Of the other 2-year-olds by freshman sires at his Ocala farm, Woods continued, “The Connects (hip 164 and hip 530) are nice. I don't think they are the first few months of the racing year, but they will be nice horses at the end of the day. They are good movers. And the Masterys are (hip 513) nice horses, too.”

While he doesn't have many to sell, Woods said he has been impressed by the first crop by champion Gun Runner (Candy Ride {Arg}–Quiet Giant, by Giant's Causeway), who stands at Three Chimneys Farm for $50,000.

“I think I might have only one going to a sale, but the Gun Runners have come around really well and they act like nice horses,” Woods said. “They have a lot of class and a lot of scope. The thing I like the best about them is how much they've changed since the Fall. We're heading into the spring and it's like night and day on some of them. They've strengthened up, gotten stronger across their backs and they train really well. And they are just good, solid horses. They are all mentally stars and they act like nice horses. I was a little negative on him at the yearling sales because of their back ends, but I'm liking them quite a bit right now.”

The 2020 juvenile sales season, which had only just begun when the pandemic caused mass lockdowns across the globe, suffered through a series of cancellations and postponements, but Woods said he sees positive signs ahead of the 2021 auctions.

“I think the vibe is pretty good right now,” Woods said. “The farm visitations are pretty lively and plentiful. We are in a different mindset than last year. We went to the sale in March last where the bomb had just got dropped and not knowing where we were at. We were fortunate the sale went well and after that, it was just a very much hang-on-to-your-britches kind of year. This year, we kind of believe we know where we are at. Our sales are going to go on and things are more positive. And hence, everything is more positive. If you look at the breeding stock sales in the early part of the year, they were very, very good for what they are. So everything is in a really positive mode and we've got that feeling here on the farm with the phone calls and the people wanting to come look at the horses. So hopefully, it continues on to the sales. It will probably be the same as ever, all top end, but at least there will be people there for that.”

You can count Gene Recio among the consignors excited about the first 2-year-olds by Practical Joke, who won the GI Champagne S. and GI Hopeful S. at two and added the GI H. Allen Jerkens S. at three. Recio will offer a colt by the Ashford stallion at the Gulfstream sale (hip 106).

“I have two Practical Jokes,” Recio said. “One of them is going to OBS April, a filly, and I have a colt out of Do the Dance (Discreet Cat) going to Fasig-Tipton Miami. They were both really good movers and very, very forward horses from the get-go. Even before we breezed, they galloped like they had a purpose, like they were going somewhere. So he's my pick right now for the earlier type horses and the Saratoga-type maiden special weight type horses. Both the ones I have are medium-sized, strong, very good moving and, touch wood, they have been very sound thus far.”

Recio has a pair of colts by American Freedom (Pulpit–Gottcha Last, by Pleasant Tap) (hip 58 and hip 446) among the 17 head he has catalogued for the OBS March sale.

“The American Freedoms are beautifully made horses,” Recio said. “I have two of those and both are really well-made. They both have great attitudes. He is by Pulpit and they seem to both have a lot of energy–a lot of good energy, the kind that wants to go out and go to work every day. Physically, they are just well balanced, bigger-than-average sized horses, with very pretty necks and good hips and good shoulders. They are kind of the shape that everybody seems to like.”

At the Gulfstream sale, Recio will offer a colt from the first crop of Mohaymen (Tapit–Justwhistledixie, by Dixie Union) (hip 75).

“I have only one by Mohaymen, but if he is any indication of what the Mohaymens are like, I wish I had a whole barn full of them,” Recio said. “He's a big, scopey horse with a very pretty neck on him and as good a mover as I have. And he's very good-minded for a Tapit bloodline.”

Winner of the 2016 GII Xpressbet.com Fountain of Youth S. and GII Lambholm South Holy Bull S., as well as a pair of graded wins at two, Mohaymen stands at Shadwell Farm at a fee of $7,500.

Asked about his expectations ahead of the 2-year-old sales, Recio said, “Same old story. I think if you jump through all the hoops–you breeze fast, vet clean and look good at the end of the shank–you'll do extremely well. If you don't, it's sometimes  hit or miss in those areas.”

Susan Montanye's SBM Training and Sales has a small but select group of juveniles by freshman sires heading to the auctions this spring.

“They are all going to the select sales, so I love them all,” Montanye said of the group. “I've told everyone who has called about them.”

Among SBM's offerings next month is a colt by Gormley (hip 44) and the operation has a second colt waiting in the wings for a later sale.

“I have one mare, and I'm going to breed her to Gormley, because of what I've seen and you can get to him fairly inexpensively,” Montanye said. “I have two of them–one I am taking to Miami and the other one I'm taking to April or Maryland, they just wanted a little more time with him. But they are both very, very nice. I think there is a lot of Malibu Moon in them. Both are pretty good-minded colts. Neither one of them are going to be my bullet, my fastest that I have in my barn, but I think both of them are more than just sprinters. They are both fast, don't get me wrong, but I think they are horses that can stretch out.”

Montanye continued, “My Classic Empire and Arrogate are both double-nominated, however the Arrogate (hip 78) is 100% sure going to go to the Miami sale. He is a super, super nice horse. It's a shame that the sire is no longer around because I think he would have made one hell of sire, just based off of what I see.

“The Classic Empire (hip 77), I have one in my barn and I know of a couple others that are very nice,” she continued. “I do have him double-nominated and I don't know where I'm going to take him yet. He is cool as a cucumber. I breezed him myself the other day. I try to get on them all at least a couple of times throughout the year. I had not been on my Classic Empire yet until last Thursday when I breezed him. He was flat-footed, walked out there like an older horse. I asked him to work, he worked. I asked him to pull up, he pulled up. Walked him home, never got fired up. Just as quiet as a mouse.”

Montanye admitted there were still uncertainties in the marketplace, but also signs for optimism.

“I don't know what to expect, truthfully,” she said. “I've heard the Koreans won't buy or can't buy. That's going to be a big blow to the industry as a whole, I think. Because it's not just about what they buy, but it's a matter of what they drive up. As far as who is coming to buy and what the market looks like, I thought it was hard to buy yearlings. And if you look at the November and January sale on babies, I thought it was extremely solid. All you kept hearing was tough, tough, tough. I thought it would be an opportunity to buy, but it was tough.

“Last year, we had the shitty end of the stick,” she said. “This year, I think as a whole you do need to be on the upper end with a nicer horse. The middle market might take a hit. I hope not because I had horses I bought that I didn't pay a lot for for the middle market. So I sure hope there is a market for them. Now that the election is behind us, at least we can move forward from that, and the stock market seems to be doing well. Gas prices are coming up, so oil is going to be better. All of that in itself is a reflection of what the industry does. I hope everybody is ready to come buy, because we have some nice horses.”

David Scanlon will offer a colt by Practical Joke (hip 148) at the Gulfstream sale and has another youngster targeted at the Fasig-Tipton Midlantic 2-Year-Olds in Training Sale in May.

“We've been really high on Practical Joke,” the consignor said. “There has been a good buzz on him around town. And we've got a couple going. We have one big, precocious colt going to the Miami sale that I'm very high on. And we've got another horse with Bruno DeBerdt, with our syndicate, that we've got going to Maryland that we are very high on. They have good hind legs and very strong bodies. They are built very tough, kind of rugged-looking and very precocious. Both horses look like they are going to be very quick and early. They have a strong build to them.”

Scanlon Training and Sales will offer a filly by Classic Empire (hip 72) at the Gulfstream sale.

“We have a couple of Classic Empires that I am very impressed with,” Scanlon said. “We have three of those that we will be selling. They are very elegant looking, very pretty horses. And they are also training very well and they seem very precocious, like they are going to be quick and early.”