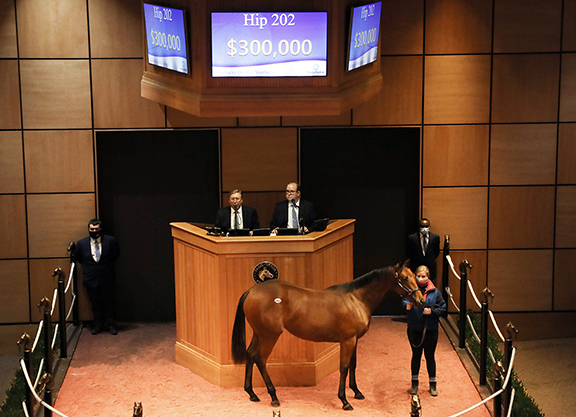 LEXINGTON, KY – The Fasig-Tipton Kentucky October Yearlings Sale opened Monday in Lexington with a day of steady trade and a pair of youngsters by Into Mischief leading the way.

“It was a solid start,” Fasig-Tipton President Boyd Browning said Monday evening. “There was solid trade with plenty of activity. There were no dramatic surprises. Certainly lots of horses got traded and there was a legitimate, reasonable marketplace.”

“The average was down slightly today compared to the overall sale last year, however the median was up and there was a very respectable RNA rate today of 22%, compared to 29% the first day last year,” Browning said. “We hope those same factors continue for the next three days.”

Into Mischief continued to be in demand in the sales ring this fall, with a filly by the Spendthrift stallion topping Monday's action when selling for $300,000 to Willis Horton Racing.

Juddmonte Farm purchased the day's second highest offering when going to $260,000 for an Into Mischief colt. The two yearlings were among six to sell for $200,000 or over during the session. Eleven reached that mark at last year's opener.

With economic and pandemic uncertainties looming across the globe, Archie St. George admitted he had kept expectations for his St. George Sales consignment in check, but he felt the market was weathering the storm.

“It seems solid,” St. George said. “We put good horses through the ring and we've sold them at all levels. It's like everywhere, for a nice horse, there is money. Just because of everything that's going on, I came in with low expectations. So certainly the Maclean's Music exceeded our expectations. But we just tried to be as realistic as we could. The name of the game is selling horses, so we seemed to be doing that today. And it seemed to hold solid.”

St. George Sales sent the third highest-priced offering of the day through the ring, with a colt by Maclean's Music bringing a final bid of $240,000 from bloodstock agent Mike Ryan.

The October sale continues through Thursday with sessions beginning daily at 10 a.m.

Into Mischief Filly for Horton

Willis Horton added a filly by Into Mischief to his racing stable when Case Clay signed the ticket at $300,000 to secure hip 202 on behalf of the owner who campaigned champion Will Take Charge. Bred by Allen Poindexter, the filly is out of Kid Majic (Lemon Drop Kid) and is a full-sister to Canadian champion Miss Mischief and a half to stakes-placed Mind Out (Tapit), who sold for $850,000 at the 2018 Fasig-Tipton Saratoga sale. Kid Majic is also the dam of Rosemonde (Indian Charlie), who produced multiple Grade I placed Rowayton (Into Mischief). The yearling was consigned by Wynnstay Sales.

“She is a lovely filly and from good breeders,” Clay said of the filly's appeal. “She has a good walk and a good physical. The whole Horton family has a real love and a passion for racing. So they saw her and they liked her and they took a swing at her.”

While the plan is to race the filly, Clay said the Horton family is also thinking long-term with the yearling.

“They were thinking of her potential as a broodmare,” Clay confirmed. “They will give her a try at the racetrack and, even if things don't go well there, she has great blood and a great family. So it's a long-term play for racing and then breeding.”

Allen Poindexter purchased Kid Majic as a 2-year-old as part of a racing partnership in 2006.

“I always want more,” Poindexter said with a laugh when asked about the result. “She had a tremendous pedigree and was a very nice filly. I really wouldn't have been too sad if she hadn't sold and I would have kept her myself. But hopefully we will have a bunch more out of that mare and I'll get to keep one eventually. I really didn't want to sell her, but in this day and time, we have to sell horses.”

The 16-year-old Kid Majic and her 8-year-old daughter Rosemonde were both bred to Tapit this spring.

Poindexter enjoyed another strong result at Fasig-Tipton this year with the $500,000 sale of a colt by Giant's Causeway at the Selected Yearlings Showcase in September.

Juddmonte Gets Into Mischief

The yearling was bred by Greg Goodman's Mt. Brilliant Farm, which purchased Golden Cropper for A$650,000 at the 2016 Magic Millions National Broodmare Sale. He RNA'd for $375,000 at last month's Keeneland September Yearling Sale and was consigned Monday by Lane's End.

“We saw him in September and really liked him, as did a lot of other people,” O'Rourke said. “He just had an issue or two and they dropped the reserve for this sale and we decided to take a chance. He's a lovely colt; looks fast. He has a stallion's pedigree and just has a lot of upside. We hope he runs to his pedigree and to his looks. Obviously we have had success with Into Mischief, as many other people have as well. You don't go buy anything blind, but sometimes you have faith in what the stallion gives you and we think Into Mischief has earned that kind of faith.”

Archie St. George's Brookstone Farm pinhooking partnership purchased a colt by Maclean's Music for $80,000 at last year's Keeneland November Breeding Stock Sale. With the sire's status on the rise thanks to the Grade I exploits of speedy juvenile Jackie's Warrior (Maclean's Music), the yearling (hip 342) was well-received in the Fasig-Tipton sales ring Monday, ultimately selling for $240,000 to bloodstock agent Mike Ryan.

“We bought him in November as a weanling and we aimed him for this sale,” St. George said. “The sire has really done well with Jackie's Warrior and the family makes sense with Complexity in the second dam. I'd like to thank Mike Ryan and wish Chad Brown and his team the best of luck with him. Hopefully, most importantly, we see him down the road running in big races.”

Hip 342 is the first foal out of Microburst (Awesome Again), a half-sister to Grade I winner Complexity (Maclean's Music) and to graded winner Valadorna (Curlin), who was second in the 2016 GI Breeders' Cup Juvenile Fillies. He was bred by Susan Moulton, who purchased Microburst with this foal in utero for $275,000 at the 2018 Keeneland November sale.

Microburst has a weanling colt by Super Saver and was bred back to Vino Rosso.

Puerto Rican owner Marc Tacher, who is represented by runners across the U.S., purchased four yearlings during Monday's first session of the October sale, led by a $200,000 son of the late Arrogate (hip 91). Consigned by Peter O'Callaghan's Woods Edge Farm, the dark bay colt is out of multiple stakes winner Hero's Amor (Street Hero).

“I liked everything. I liked the conformation. He's a beautiful horse to look at,” Tacher said of the colt. “He's obviously by Arrogate, so I really liked his pedigree. He looked like a two-turn horse, a Classic-distance horse. We came to see him quite a few times and to vet him. We were really high on that horse.”

“This year has been different and it's hard to gauge,” Tacher said of the market. “So far, the prices I've seen are fair for the buyer and the seller. I think, more or less, we are experiencing a solid market. I do think it's a fair market, but of course it's not as strong as last year.”

Also this year, Tacher purchased a filly by Frosted (hip 366) for $250,000 at the Fasig-Tipton Midlantic 2-Year-Olds in Training Sale. Now named Paradise Song, the filly is working regularly at Fair Hill. He purchased five juveniles at the OBS Spring sale, led by a colt by Not This Time (hip 953) who was acquired for $575,000. Debuting for Tacher's Sonata Stable, the juvenile now named Arzak was fifth on debut at Delaware Park Oct. 7 for trainer Mike Trombetta.

Ocala horsewoman Michelle Redding partnered with Reiley McDonald and Stori Atchison to acquire a filly by Point of Entry for $13,000 at last year's Keeneland November sale and the investment paid dividends Monday at Fasig-Tipton when the yearling (hip 60) sold for $160,000 to Selective LLC.

“She's always been a really nice filly,” Redding said. “She has always had a tremendous, beautiful, catlike walk. She is just a big, physically well-developed filly. She's very smart with a lot of class about her.”

Of the youngster's weanling price tag, Redding said, “We were able to get her bought just in a soft time in the market. Sometimes horses slide through the cracks. She was definitely one that was sliding through and we were lucky enough to be standing there and got her bought.”

The yearling is out of Gypsy Princess (Unbridled's Song), a daughter of multiple graded stakes winner Buffythecenterfold (Capote). She was consigned by McDonald's Eaton Sales.

Redding said she aims to pinhook about 15 yearlings a year, but admitted this year's results have been mixed.

“The market was a little rough on us this year,” Redding said. “We had some horses who sold well and some we were quite disappointed in that we felt fell through the cracks this year. It was a bit of a tougher year, so it was good to end it on a good note.”