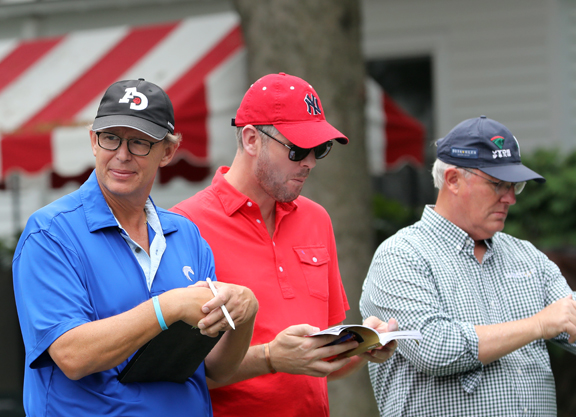 WinStar Farm has had many big years, but this one may prove its biggest to date. Kenny Troutt's operation has bred, raised and offered for sale four 2020 Grade I winners: Sept. 5 GI Woodward H. hero Global Campaign (Curlin); Paris Lights (Curlin), who led home a one-two for WinStar Stablemates in July's GI Coaching Club American Oaks; and Shedaresthedevil and Swiss Skydiver, who completed the exacta for their former WinStar-based stallion Daredevil in last Friday's GI Longines Kentucky Oaks. Plus, it co-campaigns GI Hollywood Gold Cup S. and GI Whitney S. hero Improbable (City Zip), and stands Constitution, whose first-crop son Tiz the Law has racked up three Grade I wins this year before a runner-up effort in the GI Kentucky Derby.

We caught up with WinStar President and CEO Elliott Walden Friday after a productive two days of buying and selling at the Fasig-Tipton Selected Yearlings Showcase and before the start Sunday of the Keeneland September sale at which the bulk of WinStar's yearling crop will be offered.

TDN: WinStar is perennially at or near the top among North American breeders, and of course it has campaigned the likes of homebred 2010 GI Kentucky Derby winner Super Saver, but this has been a particularly productive year for WinStar grads. What does that mean to the team at WinStar?

EW: It's really exciting for the whole farm–it's what everybody gets up every morning for and works towards. We try to compete at the highest level and it's just really special for everyone to have four Grade I winners in a year.

Winning an Oaks, and having offered all four of them for sale makes it extra meaningful and really shows what we do. For the guys who work in the yearling barn, all these horses are the same to them–it doesn't matter if they're a Book 5 horse or a Book 1 horse. They treat them all the same, they care for them all the same. They all have personalities that make them different, but they love them all and it doesn't matter if they're a Curlin or a Daredevil.

I also think people wonder sometimes if we keep our best or anything like that, but that's not the case. We have 90 yearlings this year, and all but three have or will be offered for sale and some of those were for vet issues.

TDN: Global Campaign sold for $250,000 to Sagamore Farm at the 2017 Keeneland September sale, but WinStar stayed in and is still a co-owner. How did that work out?

EW: Global Campaign was a beautiful horse. He had a little bit of epiphysitis in a knee, but [Sagamore President] Hunter Rankin and [trainer] Stanley Hough had zeroed in on him because of his pedigree. They were able to see through the epiphysitis, and asked us if we would be willing to stay in if they bought him, and we're really glad we did. We're looking forward to standing him at WinStar. Being a son of Curlin who has won from seven furlongs to 1 1/4 miles, with the speed that he has, we're really excited about him. We're also excited about the [GI] Breeders' Cup Classic–he's coming into it the right way. He's on top of his game right now.

He is really exciting, not only because he's a Grade I winner by Curlin, but the mare Globe Trot (A.P. Indy) [who died while foaling Global Campaign] had two Grade I winners from three foals (Bolt d'Oro) and all three of her foals are stallions (Sonic Mule).

EW: Paris Lights was a very nice Curlin filly–she was just kind of a plain brown wrapper, but moved well and was just one of those fillies who we wanted $250,000 for, but she fell through the cracks. There was nothing wrong with her. She was a pretty filly, but Curlin wasn't as hot at the time as he is now.

TDN: Swiss Skydiver, who has earned more than $1.14 million this year and romped in the GI Alabama S., cost just $35,000 at the same September sale.

EW: Swiss Skydiver, as it's been documented, had some vet issues that [trainer] Kenny McPeek saw through. We loved that filly all along. She was beautiful, had done everything right, never had any clinical issues with the X-rays that she had. She was always a big, strong, strapping filly.

EW: Shedaresthedevil was a nice filly by a young sire in Daredevil, but she just fell through the cracks as well. We still have her dam [Starship Warpseed {Congrats}] and she is in foal to Uncle Mo. She has a 2-year-old Outwork filly that [Shedaresthedevil's trainer] Brad Cox has who he really likes (Jemison, $150,000 FTKJUL).

TDN: None of the four WinStar-bred and offered Grade I winners carried enormous price tags. Do you think that should give buyers added confidence when shopping WinStar offerings? What does it say about the yearling market in general?

EW: That's true about the business in general–nobody knows for sure what the future holds with these yearlings. That's the great thing about it. That's why you have so many people who are passionate about buying yearlings. They feel like they can pick out the next champion.

The thing about WinStar is that by offering our whole crop, you're going to be able to pick out horses from $30,0000 to $1 million.

We try to raise them right–we've invested approximately $24 million in the last four years into our broodmare band. One great thing about Kenny is that everything we make at the farm is reinvested back into it. He's never taken a dime out of the business, and we've continued to try to upgrade our bloodstock. I think we're starting to see the fruition of that through our broodmare band.

TDN: After the Oaks, there was a lot of talk about WinStar's decision to sell Daredevil to the Turkish Jockey Club ahead of the 2020 breeding season. What went into that decision and have you considered trying to bring him back like you did with Take Charge Indy?

EW: There have been discussions [about trying to bring him back]. At the time, we were just coming off a season where we only had 25 mares bred to him. It's just hard to stand a stallion that isn't very marketable. Obviously, it was a big mistake to sell him and I take that responsibility.

TDN: Micro-share syndicates and racing clubs have grown significantly in popularity, and likely will continue to do so after Authentic (Into Mischief)'s win the GI Kentucky Derby, as he's co-owned by MyRacehorse.com. Paris Lights led home a one-two finish over Crystal Ball (Malibu Moon) in the CCA Oaks for your own program offering lower-cost access to high-end horses, WinStar Stablemates. Can you please explain the structure of that program?

EW: It was nice at the sixteenth pole with them coming down the stretch with five lengths back to another horse–you knew one of them was going to win it, but just didn't know which one.

We started WinStar Stablemates as a pioneer in the space 10 years ago as a fan initiative. It was a compliment to the syndicates around like West Point, Starlight and Centennial, but at that time there wasn't an engagement with the fans.

It morphed into a racing initiative two years ago, so we take our fillies who we're going to put into training–whether it's something that we buy and are targeting as a broodmare down the road or something that we don't get sold–and we package them together and lease them to the Stablemates. They pay the training bills, they get the purses. It's an exciting program, and there's no way they could buy these types of fillies on their own, like a Curlin filly or Crystal Ball, who we paid $750,000 for as a 2-year-old at Fasig-Tipton Gulfstream.

So, we're really excited for them. Both of those fillies are on the farm now turned out and we'll crank them up again next year.

EW: I think the sale was solid and encouraging for the future and the sales season. It was a great start. Momentum from Fasig will hopefully continue into Keeneland. It seems like there are a lot of people looking for horses; the appetite for horses is good. Obviously, we're in a difficult time, but I think if Fasig did one thing it gave you hope that the horse business is still alive and well.

EW: We really like the Midnight Storm colt who we bought. We've been very impressed with his progeny. We followed him closely given that he was by [late WinStar stallion] Pioneerof the Nile. The speed that he showed on the racetrack; his durability; the ability to handle all surfaces. For a mid-level stallion, I think he's an exciting prospect. The Gun Runner we bought was very nice as well, and we bought a very nice Super Saver off great breeders in the Nardelllis.

TDN: How many will you sell at Keeneland September and who are some hips to watch?

EW: We have 75 yearlings entered in Keeneland September, and another 14 or so in Fasig-Tipton October. Some of the stand-outs at Keeneland include:

TDN: This is an interesting year for Constitution–his current crop of yearlings was produced during his third season at stud, which is often a down year for a stallion. But, obviously, he's done very well on the track with Tiz the Law and others and is the leading second-crop sire. His seven to sell at Fasig averaged $157,857. What did you think of his result there and what are your expectations for his progeny at KEESEP and beyond?

EW: I think at Fasig his sales were okay–they sold well for what they were. I've seen a few very nice ones at Keeneland who sell in Book 1. He's in that cycle where the mares who he bred in his third and fourth years aren't going to compare to what he bred this past year. He bred some phenomenal mares (220) this past season and was the most popular stallion we've ever had. The future is really bright.

There's a real appetite for them, and some great people bought the ones who sold at Fasig–Alex Solis and Jason Litt bought two–so the right people are paying attention and trying to buy them.

We just had an Ohio-bred filly (Alexandria) finish third in the GIII Pocahontas S. The thing about Constitution is he really moves up his mares incredibly. We bred 12 to him this year ourselves will continue to fully support him.