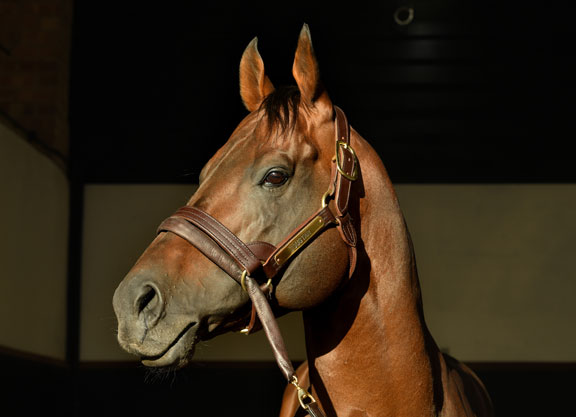 Tweenhills Stud has added a trio of intriguing sires to its roster in 2019, and one of those is Australian shuttler Zoustar (Aus) (Northern Meteor {Aus}), who will stand his first Northern Hemisphere season for £25,000.

The Group 1-winning sprinter has got off to an excellent start Down Under with just a year and a half with runners, with highlights including a trifecta in last year’s G1 Coolmore Stud S., a Magic Millions 2YO Classic victory and group-race wins by Lean Mean Machine (Aus) Zousain (Aus), Charge (Aus) and Sun City (Aus).

Zoustar is Australasia’s highest-earning first-season sire in history, with progeny earnings up to this point exceeding A$5.7-million.

The continued popularity of the horse Down Under was evidenced by the fact that he had his first seven-figure yearling at the recent Magic Millions Gold Coast Yearling Sale, a colt making A$1.075-million, and he had 16 sell for A$300,000 or more.

Tweenhills hosted a media day to show off Zoustar on Thursday, and the TDN‘s Alayna Cullen spoke with farm owner/manager David Redvers about the horse.

AC: You’ve brought up Zoustar, who is already well proven Down Under, from Australia. Tell us a bit about the horse.

DR: We met Zoustar for the first time immediately after he won the Coolmore Stud S. himself, and we were immediately taken by his enormous presence. His physicality, his actions–a truly beautiful horse, he was. We bought into him at that stage with the hope of running him at Royal Ascot; he was a favourite for the [G1] Diamond Jubilee S. Sadly, that didn’t happen. He got a knock when he was in training over here, in the immediate run-up to the race.

We took the decision at that stage that we would let him start his career at stud in Australia, and we wouldn’t bring him up to the Northern Hemisphere unless he was a prudent success. We had no idea just what a prudent success he would be. We are extremely fortunate to bring a horse of his caliber here.

AC: He started out brilliantly as champion first-season sire in Australia and he’s built on that this year. Can you recap his season so far in Australia?

DR: Last year he was champion first-season sire in Australia by a wide margin. I think he broke all records when it came to prize money for a first-season sire. And this year he’s followed on in exactly the same fashion. His horses have trained on spectacularly well. I think it’s pretty fair to say that he’s about A$2-million clear on second-season prize money, and the last time I looked, he was the leading sire of 3-year-olds in Australia as well. So he has gone from strength to strength. He’s had a huge book of mares in Australia, but has turned up here looking fresh and ready to go. [Editor’s Note: as of 1/17, Zoustar is Australia’s leading sire of 3-year-olds for the season with A$3,164,050, with his own damsire Redoute’s Choice in second].

Obviously, the highlight to date has been the historical one-two-three, the trifecta, in the Coolmore Stud S., which has been the stallion-making race in Australia. It’s the race that he won himself, that Northern Meteor won, Encosta de Lago won, so he’s got a fair family tradition, and obviously this year, Sunlight, Zousain, and Lean Mean Machine took up the one-two-three, which as far as we know has never been done before.

It’s hugely exciting to be involved with a horse of this incredible ability, and potency as a sire. Already this year with his 2-year-olds, we’re seeing some serious action. Sun City won a Group 3 in late December but unfortunately had to sit out the Magic Millions 2YO Classic, for which he was favourite, because of an infected joint.

AC: What sort of reception has Zoustar been given by European breeders?

DR: It’s always very difficult with an Australian horse, and people not getting the opportunity to see him until he gets here. Many people will remember him because we paraded him at the first Goffs London Sale, and they loved him then.

Anybody with any sort of Australian slant has booked him months ago, and those that came to see him [in the few days after his arrival] all booked him immediately. So we’re now absolutely brim-full with mares. He’s got a limited book. I think we’ve kept back about five spaces for very special mares.

I look forward to showing him to everybody, because they need to see this horse. He’s a genuine breed-shaper.