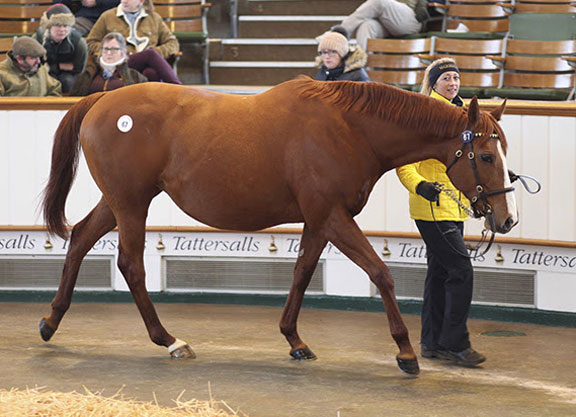 All I Need | Tattersalls

Newmarket, UK–Newmarket can be an unforgiving place in the depths of winter and potential buyers remained on the cold side as a new year of British auctions opened in subdued fashion at the Tattersalls February Sale on Thursday.

Some vendors might well have forecast the apathetic market as a number of the more interesting horses were withdrawn, whilst this year's sale did not have the rare attractions from 2018, which included some of the Ballymacoll Stud dispersal and choice fillies owned in partnership by Markus Jooste.

A quartet of in-foal broodmares offered at lunchtime livened up business, providing two of the day's top three lots.

Offered by Voute Sales, she has now joined John Deer's Oakgrove Stud just outside Chepstow. Stud manager David Hilton was on hand for the bidding and signed the ticket at 55,000gns, and explained that their interest had been sparked some way down the mare's page.

“Tim Lane [former manager] bought Altesse Imperiale, who is under the second dam, and she has been a really good mare,” he said. “She has bred four winners, three of them black-type horses, including Altruistic, who finished third in the G1 Racing Post Trophy, so it made sense. She's in foal to Frankel.

“It is a very active family and she suits us physically – she is a fine mare and we have a breeding rights in some strong bodied stallions. I'm very happy to have got her at that price.”

Hilton imagined that he would be discussing All I Need's next mating in the horse box on the way home to South Wales.

It will be all hands on deck back at Oakgrove, which stands Deer's multiple Group 1 winner Al Kazeem, as the stud has already welcomed the first arrival of the new year.

“We had a nice Teofilo colt out of a Shamardal mare, from the family of Lady Grace,” he added. “He looks to have a lot of quality.”

Now Or Never For Kalandara

There had been high hopes that lot 69 would be a star turn, only for this to prove short-lived. Baroda and Colbinstown Studs's Kalandara (Ire) (Rainbow Quest) had risen into the higher echelons through the exploits of her daughter Luminate (Ire) (Lawman {Fr}, a dual Group 3 winner in France and sold to be a broodmare here for 900,000gns in December Sale.

A buyer was found for the other mare expecting a foal from last year's leading first-season sire. This was Art Of Dance (GB) (Medicean {GB}) (lot 68), who is from a family that Eamonn Reilly of BBA Ireland knew well and prompted him to lodge the final bid of 50,000gns. She is a daughter of the G2 Sun Chariot S. winner Danceabout (GB) (Shareef Dancer) and had another No Nay Never filly foal last year.

“I bought her Bated Breath colt Marshall Law here as a yearling for 72,000gns,” Reilly explained. “He's in training with Jessie Harrington and has shown some good form at Leopardstown.

“She has been bought for an Irish breeder and being in-foal to No Nay Never is very attractive.”

Flanagan Phones It In

Although many familiar faces from the bloodstock world were missing, modern technology means that sales can always be monitored from afar and a late movement from a switched-on Mick Flanagan landed him Highclere Stud's Snazzy (Ire) (Kodiac {GB}) (lot 159).

Listed-placed from in a six-run juvenile campaign for Charlie Fellowes, her third dam is the exceptional sprinting mare Cassandra Go (Ire), who has produced star after star including Magical (Ire) and Rhododendron (Ire).

Although Flanagan often acts as agent for the China Horse Club, this 52,000gns purchase is believed to be for his own collection and Snazzy is likely to visit Nathaniel (Ire) (Galileo {Ire}).

David Cox, who made the final bid, said, “Mick rang me this morning and said would I take a look at her, and I told him she's handy and moves well. She looked good value.”

She was knocked down for 33,000gns to Max Pimlott, who explained that she was bought for an undisclosed Irish jumping breeder.

Not a lot was expected from the consignment of yearlings and juveniles, many of which would have struggled to make the cut in a more selective sale.

It was much the same with the yearlings, a considerable number of which failed to even reach 1000gns. Trainer Phil Kirby, who raises youngsters alongside his burgeoning training operation in Yorkshire, could have got a bit of value about lot 131 when signing for just 11,000gns for a daughter of the estimable Camelot (GB) (Montjeu {Ire}). The progeny of Territories (Ire) (Invincible Spirit {Ire}) are a year away from running but Jill Lamb Bloodstock landed the successful bid of 15,000gns for a daughter of Vereri Senes (GB) (Nayef), from the immediate family of James Garfield (Ire) (Exceed And Excel {Ire}).