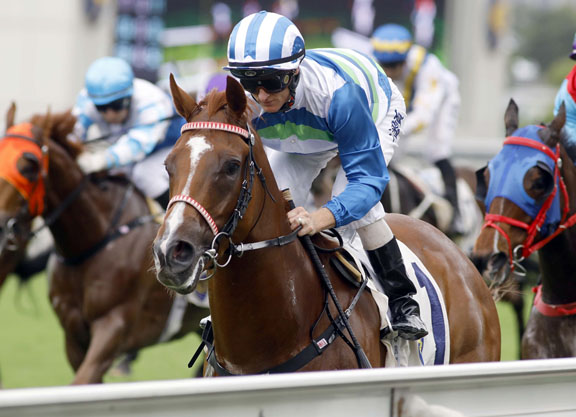 Saturday’s nominal feature at Sha Tin up the 1000-metre isn’t your average Class 2 handicap, as it has drawn a pair of upwardly mobile and lightly raced runners, each with designs on making an appearance in the G1 Longines Hong Kong Sprint a little less than two months down the road.

In this corner comes the John Moore-trained Aethero (Aus) (Sebring {Aus}), a romping winner of his three starts late during the 2018/2019 season, but who surrendered his perfect record when rolled into third as the $1.50 favourite in a 1200-metre test Oct. 1. Off only fairly from a low draw, the hulking chestnut was caught in traffic for a fair portion of the trip and refused to settle for Zac Purton. He offered a bit of a rally once into the clear with about 300m to travel, but the race was lost by then, as he was beaten four lengths.

Despite the outcome, trainer John Moore remains bullish on the 3-year-old, who reminds many of former stable star Able Friend (Aus) (Shamardal).

“Everything is right with him,” Moore told the HKJC’s David Morgan Friday morning. “His work rider Romain [Clavreul] went around on him earlier this morning and said he’s raring to go, and his work leading into that has been good.

“This race wasn’t in the plans originally but when we found he’s still a work in process, as far as racing in among horses, this race was one to get a few more ratings points on the board.”

In order to do so, Aethero will have to deal with Voyage Warrior (Aus) (Declaration of War), like his market rival a winner of three from four to date, but having his first run of the season Saturday. Heavily favored in each of his appearances, all at this minimum trip, the 4-year-old went down to defeat at the hands of Aethero’s stable companion Thanks Forever (Aus) (Duporth {Aus}) May 26, but closed his first preparation on a winning note as the $1.20 jolly June 23. Zac Purton has been aboard Aethero in all four of his starts, but had committed to Voyage Warrior long before Aethero was re-routed to this heat.

“John Moore’s horse is only three, they’re on a similar rating and I see my horse being a year older as an advantage. He’ll run a tremendously good race–that’s how I see it,” trainer Ricky Yiu said. “We have the tongue tie on to help him relax. He has tons of speed but he’s done it all so easily, he’s automatic. He’ll be up there where he’s happy, maybe roll to the outside rail. Zac is a champion jockey, he’s won on him before so he’ll know what to do.”